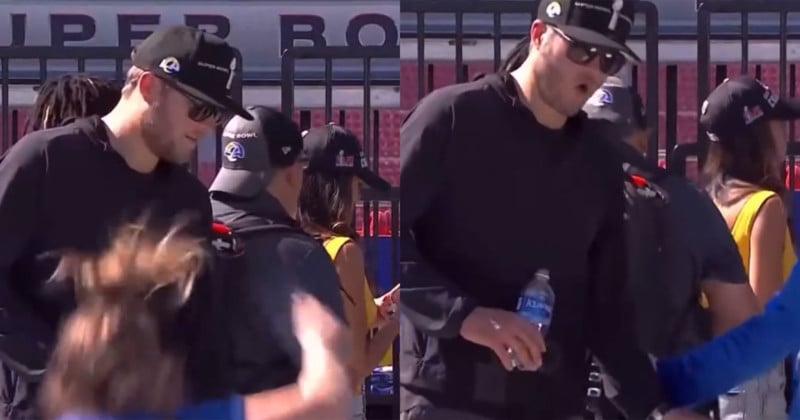 NFL star quarterback Matthew Stafford is being slammed on social media for his reaction to seeing a photographer fall off a high stage during the Los Angeles Rams’ Super Bowl victory parade and rally. The woman broke her back and her camera equipment.


Stafford and his wife are now saying they will cover the woman’s medical and gear.

A Fractured Spine and Broken Cameras

The Rams held their victory parade and rally in Los Angeles on Wednesday after defeating the Cincinnati Bengals in Super Bowl LVI on Sunday. During the festivities, a video stream caught a photographer shooting a smartphone photo of Rams quarterback Matthew Stafford. As she backs up for a wider view, she accidentally slips and falls backward from the platform that was about 10 feet above the ground.

In a video clip circulated on social media, Stafford appears to see the woman’s fall, mouth “Oh my God” to his shocked wife, Kelly, and then turn around and walk away while taking a swig from a water bottle.

@AdamSchefter get on Matthew Stafford watching a photographer fall of the stage at the Rams parade and walk away 🤦‍♂️ pic.twitter.com/LfjSJ3fzYy

A horrified Kelly is seen walking to the edge of the stage to check on the condition of the photographer.

The woman who fell was freelance photographer Kelly Smiley, who works as a photo editor for the NFL, NBL, and NHL. In a since-deleted Tweet published on Wednesday night, Smiley stated that she was okay but waiting in the emergency room for X-Ray results. She added that both of her cameras broke in the fall. 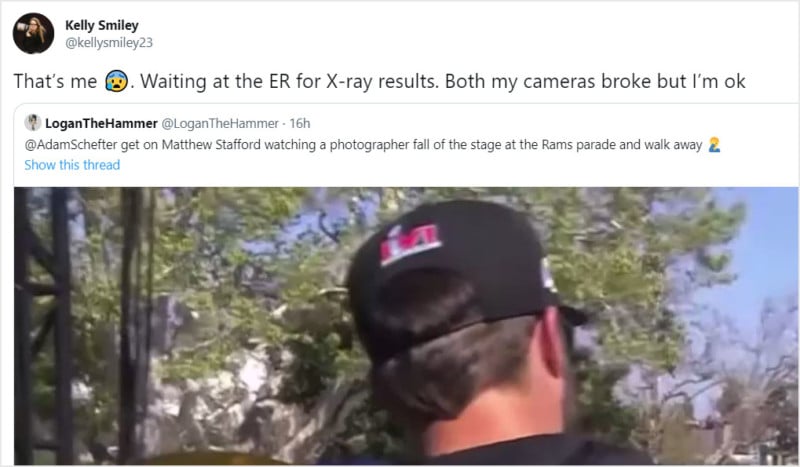 When the X-Ray came back, Smiley learned she had fractured her spine.

A friend of the photographer, NFL photo editor Tim Kothlow, soon set up a GoFundMe to help cover Smiley’s expenses. 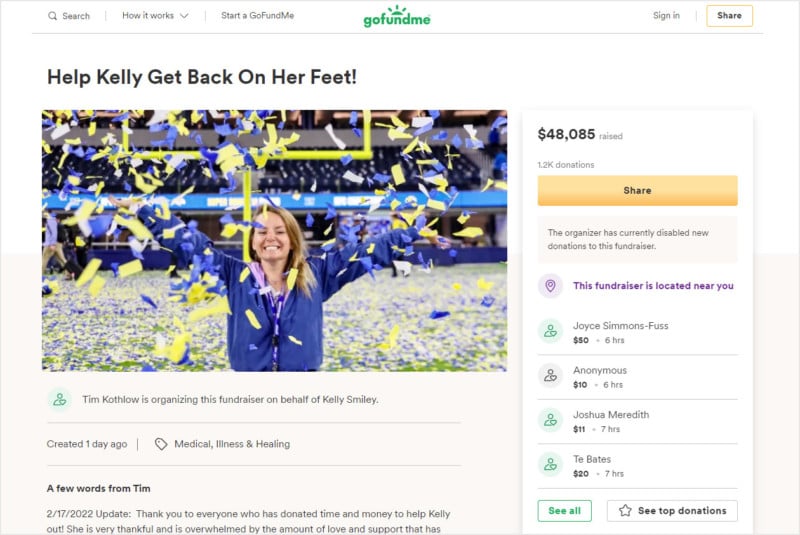 “This morning (2/16/2022), while covering the Rams parade in Los Angeles, Kelly took a heavy fall off the stage while covering the event, and it landed her in the hospital with a fractured spine,” Kothlow writes. “The funds raised by this GoFundMe will help cover Kelly’s growing medical expenses as well as replace the camera gear that was severely damaged due to her fall.

“Since Kelly is a working photographer, she needs this gear to help keep her working after fully recovering. Kelly is loved by all who know her and is a well-respected individual in the photography community. Please consider donating to this GoFundMe to help Kelly hit the ground running after she heals up.”

The crowdfunding campaign has raised over $48,000 through over 1,200 donations at the time of this writing.

“This is a bad look,” tweets sports podcaster Michelle Magdziuk. “[…] There is 0 reason not to at least look down and check on her and make sure someone is getting help. Who just walks away like that after someone falls off anything, let alone a high stage?

Some on social media have defended Stafford, saying that he was likely impaired by the alcohol he had been drinking during the long celebration.

“Being drunk is not an excuse,” Magdziuk responds. “I become nicer when I’m drunk and want to help people more… you don’t just forget how to be a human being.”

“I couldn’t be more disappointed in him as a human being that his first reaction is simply to walk away and not even offer help,” tweets sports radio host Jason Smith. “What kind of person does that?”

As criticism grew, the Rams and the Staffords released a joint statement on Thursday, apologizing for what happened and stating that they would be covering Smiley’s medical and gear replacement costs.

“We have been in communication with Kelly Smiley since yesterday’s incident and we are sorry for what happened,” the statement reads. “As we told Kelly, we will be covering all her hospital bills and replacing her cameras. We wish her a speedy recovery.”

Update on 2/23/22: Stafford has apologized for his reaction in an appearance on his wife’s podcast.

“That obviously happened really quickly and suddenly and unexpectedly, and I wish I had a better reaction in the moment. I didn’t,” Stafford said. “I apologize to her for that. But I’m glad that all in all, she’s doing alright. It’s one of those things that you try to train your actions to be a little better next time.”