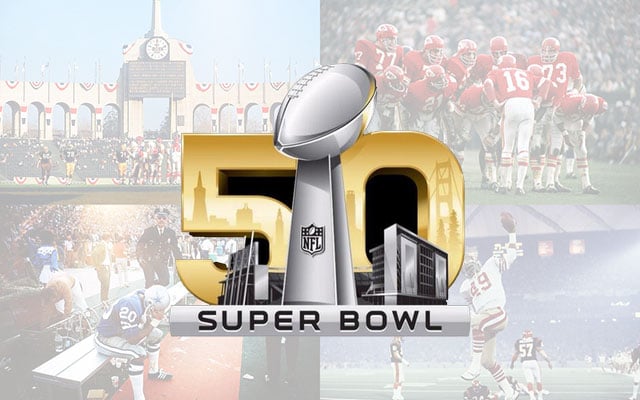 This year’s NFL championship game is Super Bowl 50, and it’ll be played on February 7th, 2016, at Levi’s Stadium in Santa Clara, California (the home of the 49ers). To celebrate what is often the most watched TV broadcast of the entire year in the United States, Sports Illustrated is spending 50 days posting 50 iconic photos from each Super Bowl to the magazine’s Instagram page.

Here are 10 of the memorable Super Bowl photographs published so far:

“The first Super Bowl wasn’t even called the Super Bowl. It had the much less user friendly name, “AFL-NFL World Championship Game”. And in it, the Green Bay Packers beat the Kansas City Chiefs, 35-10 at the LA Coliseum, January 15th, 1967. You’ll notice two things you won’t see these days. Empty seats and sunlight.”

“And the Green Bay Packers make it two in a row, defeating the Oakland Raiders 33-14 for the second AFL-NFL Championship Game. The great Vince Lombardi is carried off the field by Jerry Kramer (#64), in this classic photo by Neil Leifer for Sports Illustrated. This game was in Miami, at the Orange Bowl.”

“And on the 3rd game, they finally called it Super… And a national holiday was born. This was the first game that was called the Super Bowl, and it was. Joe Namath and the AFL’s NY Jets defeated the favored Baltimore Colts of the NFL, 16-7. The game was played at the Orange Bowl, Miami, FL., 1/12/69. And if you were Joe Namath, you sat by the pool, answered reporters questions, guaranteed a victory, and you were the coolest guy on the planet.”

“Len Dawson of the Kansas City Chiefs leads his team to a win over the Minnesota Vikings, 23-7. The game was played in New Orleans (1/11/70), but it was at Tulane University, which is why it’s outdoors on real grass. This is the last Super Bowl before the merger between the NFL and the AFL. Photo by Neil Leifer for Sports Illustrated. We are posting one photo per day, for each Super Bowl.”

“And so it goes, in what was called the ‘Blunder Bowl.’ 11 turnovers, 7 by the winning team. Maybe it was because it was the first one on artificial turf. Maybe it was Anita Bryant as the halftime show. Either way, the Baltimore Colts defeated the Dallas Cowboys 16-13 on a last second field goal by Jim O’Brien. 1/17/71, Miami, FL. Here, the great Mel Renfro sits dejected on the Cowboys bench.”

“Here it is, the only undefeated team to win the whole thing. 17-0. The Don Shula coached Miami Dolphins defeated the Washington Redskins,14-7. The first team to ever have two 1000 yard rushers in the same season (Larry Csonka and Mercury Morris). 1/14/73. Los Angeles Coliseum. In this stadium for Super Bowl I, about 62,000 people showed up. For Super Bowl VII, 90,000. Here, Billy Kilmer tries to throw over Manny Fernandez.”

“They don’t make them like this anymore. Fred Biletnikoff and Kenny Stabler celebrate after the Oakland Raiders defeated the Minnesota Vikings 33-14. The game was in the Rose Bowl, 1/9/77. The Vikings became the first team to play in 4 Super Bowls, losing all 4 to different teams. Biletnikoff was the MVP.”

“Backup QB Danny White gets a kiss from a Dallas Cowboys cheerleader, while co-MVP Harvey Martin only gets his picture taken. The Cowboys defeated the Denver Broncos 27-10, at the Superdome in New Orleans, 1/15/78. The Broncos completed just 8 passes for 61 yards. The coin toss was by Red Grange.”

“Hall of Fame linebacker, Jack Lambert, eyes the Los Angeles Rams during Super Bowl XIV in Pasadena, 1/20/80. The Pittsburgh Steelers beat the Rams, 31-19, in front of a record crowd of 103,985. Cheryl Ladd sang the National Anthem.”

“Earl Cooper catches a TD pass from Joe Montana, as the San Francisco 49ers defeat the Cincinnati Bengals, 26-21. It was the first Super Bowl where the losing team had more total yardage than the winner. And Diana Ross sang the National Anthem. 1/24/82, Detroit.”

A Photographer’s Photos of His Camera-Shy Girlfriend