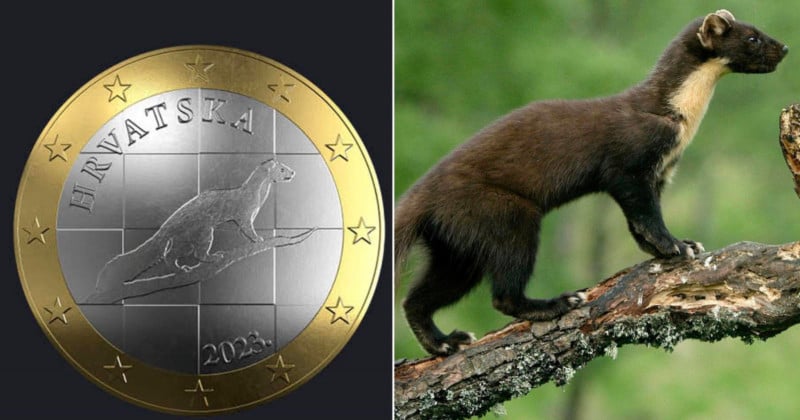 The contest winner who submitted the winning design for Croatia’s upcoming Euro coin has withdrawn his entry and returned the prize money after it was revealed that it bore a striking resemblance to a photo taken by a Scottish photographer in 2005.

The Guardian reports that the country is set to adopt the Euro currency in 2023 and as part of that process, it needed to decide on a design that would represent the country and decided to do so through a national competition. The winning design was apparently an ode to the current Croatian currency known as the kuna, a name which is derived from a weasel-like carnivore whose fur was used as currency in the middle ages.

The design chosen shows the creature standing on a branch, and the contest winner who submitted the image, artist Stjepan Pranjkovic, was awarded the prize of 70,000 kunas, or about 10,000 Euro.

After the design was revealed, photographer Iain H. Leach from Scotland noticed that it looked identical to a photo of a marten, another weasel-like carnivorous mammal, that he shot in 2005.

“It has been pointed out that the design is almost identical to one of my photographs which appears on my website, which was taken on June 8, 2005, in Scotland,” Leach tells The Scotsman.

“I cannot afford to use a lawyer in Croatia to take this any further. If my photograph is to be used as the basis for the design of the one Euro coin, I think it is reasonable to expect that I should be paid a fee for permission to use it.”

Leach says that he has no issue with his photo being used, though he would like to be recognized for it.

“Perhaps the organizers of the competition will get in touch with me to discuss this further. I do not mind the photograph being used for the coin and would be pleased to see it there. However, I would like to be acknowledged officially as the photographer and to receive a fee for its use.”

A Comparison of the Coin Illustration and Leach’s Photo

Here is a closer look at the proposed coin design:

Here is the original photo that Leach says was used without permission to create the coin illustration:

And here is an overlay that directly compares the two martens:

As word of Leach’s complaints spread on the Internet, someone digging into Pranjkovic’s Facebook activity discovered incriminating posts that appear to confirm that he based his winning design on a photograph.

Croatian online newspaper Index.hr shared a couple of screenshots in which the artist asked for advice on taking a cutout from a photo as well as applying lighting effects in designing a coin.

“Help! Can someone tell me if it’s possible to take a cutout of a photograph from Photoshop and open it in Illustrator or maybe some other program just to apply some lighting effects on it?” Pranjkovic wrote in a Facebook group post. “I can’t do it in [Photoshop] because I don’t have dedicated GPU in my device so I can’t do any rendering.

“I’m designing some coins and need to apply lighting effects on a photo to get the metallic look. I tried it some other ways but none of them look good enough.”

The Artist Has Withdrawn the Design

The Croatian National Bank said it would issue a call for new designs as the contest’s winner had withdrawn his proposal and returned the prize money, citing an “unpleasant atmosphere created in media and on social networks.”

Leach says he’s satisfied with the outcome and that he never had the intention to sue anyone.

“I’m not intending to sue anyone,” he told a Croatian reporter. “A right decision was made and for me, this is the end of the story.”