Photographer Steve Perry was out photographing snowy owls with his wife when they both realized that something seemed off about their photos: they were soft. After some testing, he realized that the culprit might be his lens hood.

Before explaining why Perry came to his conclusions, it’s important to first understand how heat distortion can affect long telephoto lenses. In 2014, Perry shared a short but informative video that explains why and how heat can affect photos taken with a long lens.

If a photographer is attempting to take a photo over a long distance with a telephoto lens and the air or ground in front of the camera is hot, the rising heat waves can distort the light and cause the subject in the distance to appear blurry, he explains. Perry says that while any lens will show heat distortion, it is most noticeable on long telephoto lenses over about the 150mm range. The issue is also made worse depending on how far away the subject is as more refracted light is introduced between the camera and the subject.

The result can be very frustrating for photographers who will, despite their best efforts and top-of-the-line equipment, only capture blurry photos. One standout note that Perry makes here is that this issue isn’t just reserved for wide, open spaces. This distortion can happen anywhere an object is giving off heat, which plays directly into an issue he would accidentally discover over seven years later.

While photographing snowy owls with his wife, Perry discovered that they were both seeing results in-camera that looked a lot like heat distortion. The only problem was that there was no heat source near them that would be causing that, as they were outside in single-digit degree temperatures.

That is, that’s what he initially thought.

“I got to thinking, maybe the warm lens was subtly heating the air directly in front of the element and that likely warmer air was mixing with the cooler air coming in from the front,” he says.

Perry says that he and his wife were moving from shooting location to shooting location by driving around in a car, and the inside of the vehicle was, as would be expected, heated. That meant that when they got out of the car to actually shoot, their gear was a lot warmer than the outside air. By putting a lens hood on, he was trapping that warmer air into a tight space right up against a large source of much cooler air.

The difference in temperature was enough to cause an effect that looks just like traditional heat distortion.

Perry and his wife tested the theory and removed their lens hoods and the results were noticeable and immediate: 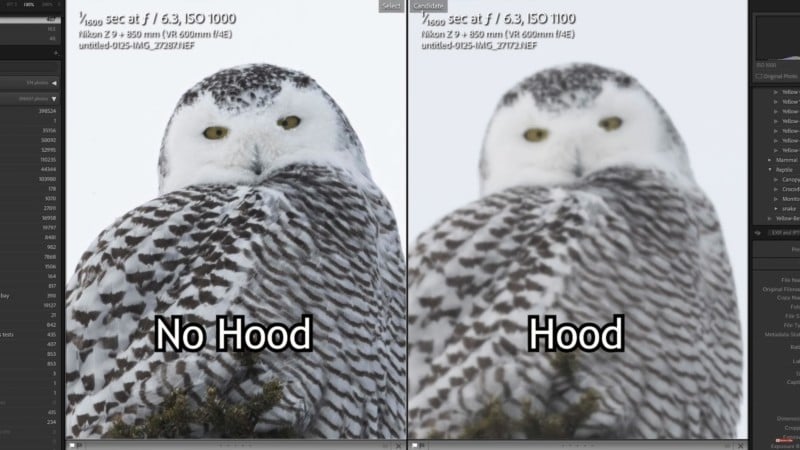 Not to just trust his findings in one circumstance, Perry later tested his theory on a different camera and lens. The problem still persisted: He tried again later in an environment with less extreme temperature differences and it still happened.

“Even if you’re not using big glass, it looks like this can turn into an issue although that may vary by the size and shape of your lens hood,” he says. “I can’t test them all!”

Perry says that to avoid this problem, photographers should allow gear to cool down at least 10 to 15 minutes before shooting. The greater the difference in temperature between where the camera and lens were stored and the temperature where a photographer is shooting, the longer they will need to wait. Keeping gear in a cooler environment a few hours before use will also address the issue.