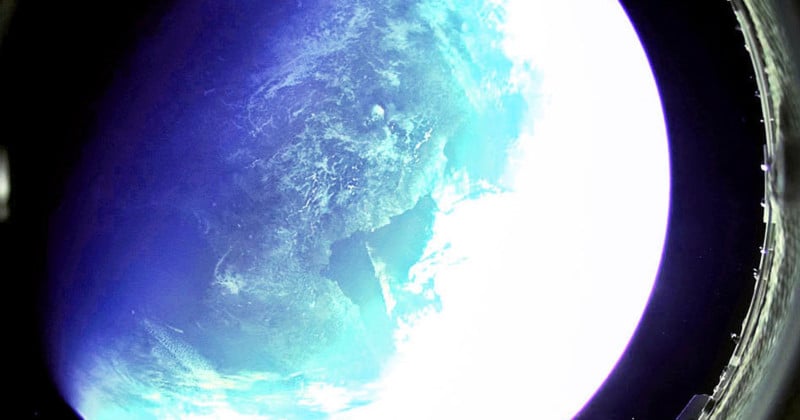 North Korea’s official state media has released a set of photos captured from space that it says were taken from a camera mounted on one of its missiles designed to deliver a nuclear warhead.

Taken from a Missle Capable of Carrying a Nuclear Payload

The photos are allegedly from the weekend launch of North Korea’s Hwason-12 intermediate-range ballistic missile test and were widely distributed across the country. Four photos are included in the announcement: two that show the rocket taking off from separate angles and a pair that allegedly were captured from space.

The Academy of Defense Science tells North Korea’s state media organization the Korean Central News Agency that those later two photos were taken by a camera installed at the missile warhead. This is not the first time North Korea has shown photos of Earth taken from a missile, though the last time it happened was in 2017.

Bloomberg notes that North Korea’s claims have not been independently verified. If true, the images would at least appear to have the right perspective, as the two photos show mainland China and the Pacific Ocean, the latter obscured by clouds.

Even though independent sources had not verified the truth of the images at the time of publication, both South Korea and Japan report that the rocket reached a height of about 1,240 miles, which would be the highest any North Korean rocket has reached since 2017. That height gives the missile a range of about 2,800 miles, according to weapons experts cited by Bloomberg, giving it enough range to hit United States military bases in Guam.

North Korean military analyst Ankit Panda says that the lack of Kim Jong Un’s presence and the language used in the media briefing point to a test that was intended to verify that a system works rather than show any new technology.

BLUF: in '17, NK presented these launches as a much bigger deal (KJU guided them, front-page news). The message? "We have new missiles and you should know they work."

Now, it's a fact-of-life: we have missiles, they work, and we'll occasionally test them to make sure they work. https://t.co/JWjGQ0v99z

The country’s leader had previously threatened to end the pause on nuclear testing and long-range missiles that could target the United States mainland that had been in place since talks with then-President Trump in 2017. Bloomberg notes that additionally, North Korea had restarted its plutonium-producing operations in its main nuclear site last year and satellite imagery shows it expanding a plant that enriches uranium.

The United Nations prohibits nuclear and ballistic missile testing and has imposed strict sanctions on North Korea, but this has not historically proven to slow the country’s efforts, the BBC reports.