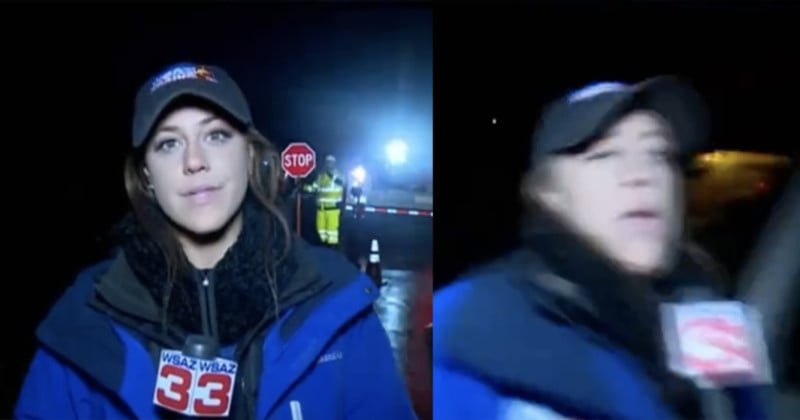 A television reporter for an NBC news affiliate was struck by a car while on a live broadcast. The scene unfolded in real-time and despite the interruption, she finished her segment.

Tori Yorgey was reporting a scene of a water main break in Dunbar, West Virginia with the NBC affiliate WSAZ in Huntington when she was unexpectedly hit from behind by a vehicle. She and her camera were knocked to the ground.

“Oh my God. I just got by a car, but I’m okay!” she can be heard saying as her camera also was toppled. “That’s live TV for you!”

Wow, this reporter gets hit by a car, and rebounds to finish the live shot! 😂 pic.twitter.com/dbwKt5N1xc

Yorgey proceeds to repeatedly confirm her safety, set her camera back up, and continue her segment. She can also be heard speaking to the person who hit her and confirming that she was unharmed.

“That woman was so nice though,” she says to studio anchor Tim Irr. “She didn’t mean to. It was an accident and I know it was.”

Yorgey was later checked out and reported that while she is sore, she has no broken bones and is largely unharmed.

The Dangers of Solo Reporting

In recent years and amid budget cuts, many local television reporters will perform stand-ups for live broadcast or record what are known as “packages” (stories that are recorded and played back later) on location by themselves, when in the past they would be accompanied by a camera operator. Over the last decade, the responsibilities for reporters have gone up, as they are now expected to act as on-screen talent, camera operators, and in some cases even editors.

As a result, reporters have to be aware of their surroundings due to the increased possibility of theft (such as when photographer Jefferson Graham’s camera was stolen while he was recording a segment in San Francisco) or dangers caused by the different environments reporters find themselves in.

Yorgey confirms as much in an interview with NBC News, where she refers to herself as often a “one-woman band.”

The footage brings up some important notes about on-site reporting and safety precautions. Yorgey, 25, may have had this specific issue due to inexperience or improper training. Chris Post, a photojournalist and award-winning reporter for Bethlehem, Pennsylvania’s WFMZ News, noticed Yorgey’s story and published a video that explains how to properly secure an area near traffic to avoid harm.

After a close call for a reporter doing a live-shot along an active roadway, I thought I would lay out some tip for safe live-shots. These tips come from 20+ years of emergency 🚨 🚑 work. I’ll post the full video in a few hours. Stay safe my pals @NPPA @RTDNA @spj_tweets pic.twitter.com/qp0RJ0ChMi

“This reporter got very lucky with this,” Chris writes, referring to Yorgey. “It’s a reminder that situational awareness is important and anytime we are in a low viz environments you should be wearing a ANSI compliant reflective vest. I’m also for yellow warning lights on news vehicles! Illuminate to protect.”