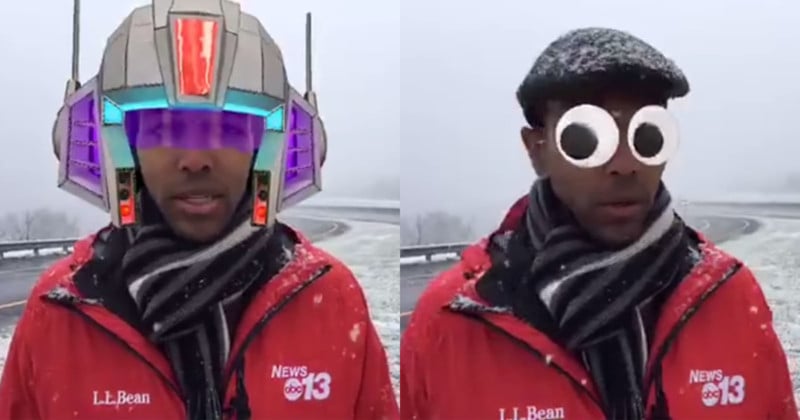 A TV news reporter in North Carolina is going viral this week after he did a serious live report with wacky face filters accidentally turned on.

WLOS ABC 13 anchor Justin Hinton was doing an on-location report in Asheville about unusual snowfall in the area when viewers were treated to a series of augmented reality effects on Hinton’s face. The reporter was using Facebook Live for the broadcast, and he had accidentally left the Mystery Mask filter enabled before stepping in front of the camera.

“When you’re trying to do a serious Facebook Live about the weather and you accidentally tap the Mystery Mask filter,” WLOS ABC 13 writes on Facebook. “Poor Justin Hinton.”

Hinton didn’t realize anything was amiss until reading the comments pouring in from viewers on Facebook and through social media after the broadcast.

The feeling when you realize everyone at work was watching your FB live and you had no idea a random filter generator was turned on. 🤦🏽‍♂️🤦🏽‍♂️😂😂 https://t.co/9EA7JGsQBG

Clearly too cool for the snow pic.twitter.com/OXCHLQJh9K

“Right before going live on Facebook on the WLOS ABC 13 station account to talk about snow, I somehow activated a filter generator,” Hinton explains. “The photog I was working with said something about the screen having weird faces. He didn’t elaborate, so I said it would probably go away. Needless to say, it did not go away.

“I didn’t realize it until I stepped off camera and saw the comments where people were talking about the faces. My bosses, coworkers, friends, PIOs and more called/texted saying how funny it was, so here you go. If you can’t laugh at yourself, what’s the point of laughter? I hope you enjoyed the snow day, and remember to smile and laugh!”