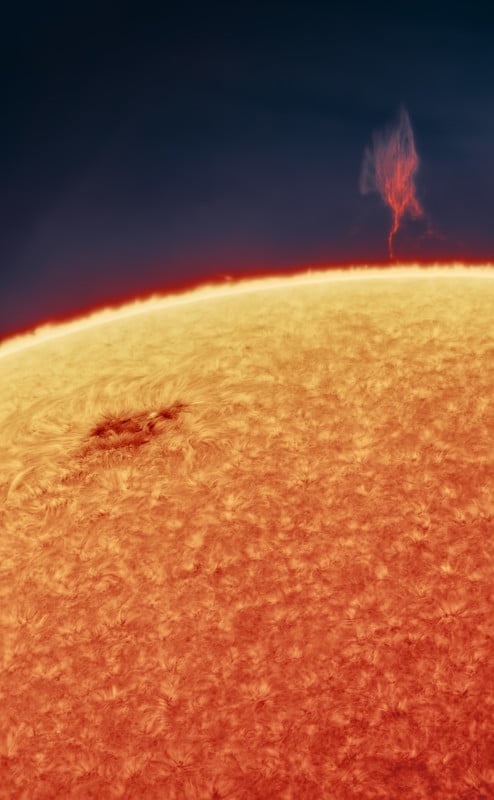 Right now, there is an 80,000 mile high “plasma tree” bursting from the surface of the Sun and into its atmosphere. This image, captured by photographer Andrew McCarthy, provides a sense of scale to the sheer mass of the Solar System’s star.

McCarthy is an avid and well-known astrophotographer who has shared numerous photos of the sky over the last several years and just in the last few months he has captured stunning photos of comet Leonard, a detailed image of the sun combined from 150,000 individual photos, and a composite of the longest partial lunar eclipse in the last century.

A Massive Plume as Tall as Jupiter is Wide

His most recent photo is a tighter crop of the Sun’s surface that shows a massive “plasma tree” bursting into its atmosphere that he estimates is around 80,000 miles tall. That would make the mass of plasma on display about the diameter of Jupiter and McCarthy says that it will rain “moon-sized globs of plasma” like “an apocalyptic thunderstorm” back down onto the solar surface.

“These types of prominences with a lot of vertical lines in them are a great time to observe ‘coronal rain’ which is when moon-sized bits of plasma rain down through the solar chromosphere,” he tells PetaPixel.

As violent as that might sound, it will have no effect on Earth, and he says the only reason anyone would need to be concerned about it is if they were standing on the Sun.

“The sun is heading into solar maximum, the most active phase of its cycle, so more of this type of activity is on the horizon.”

McCarthy captured this image using a five-inch telescope with a Daystar quark hydrogen alpha filter and the finished image is around 3,000 photos that have been stacked through what he describes as the hazy skies above his backyard in Florence, Arizona.

Don’t Try This At Home Without the Right Equipment

It’s important to note that just pointing a telescope at the sun is not a good idea. McCarthy’s telescope is specially tuned and designed to reject the sun’s heat while still letting in a precise type of light that reveals the solar atmosphere.

Without this special tuning, a telescope will just become a giant magnifying glass:

Aftermath. This was on a hazy day, and only a 5” scope (most of my telescopes are larger than that) pic.twitter.com/jeNytx5dnN

More of McCarthy’s stunning astrophotography can be found on his Instagram and his website, and those who want to support his work can also find him on Patreon.