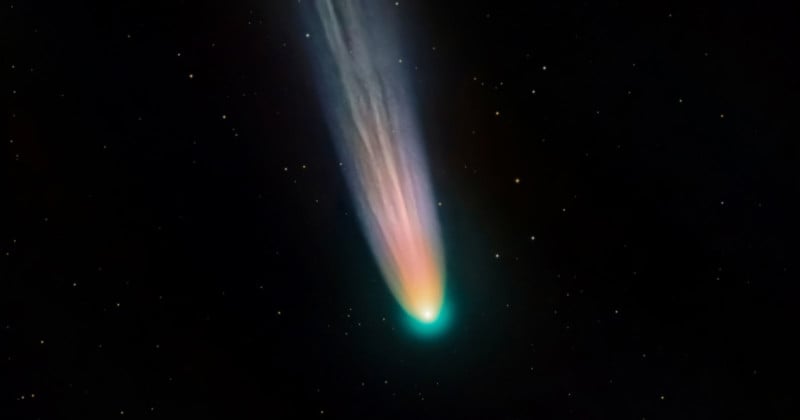 As Comet Leonard whizzed by Earth during Christmas festivities on its journey through the Solar System, photographer Andrew McCarthy went out into his backyard and captured incredible photos of the colorful “Christmas Comet.”

A Close-Up Photo of Comet Leonard Through a Telescope

McCarthy went outside in on the night of December 26th and managed to photograph the comet for about 12 minutes despite it being low in the southwestern sky (as seen from Florence, Arizona).

“[The brief window gave] me a great look at the incredible structure and color around the nucleus,” McCarthy writes. “I couldn’t quite see it with the naked eye, but through binoculars I could see it pretty clearly. You can actually capture it with just a cell phone if you know where to look!”

McCarthy used a modified SCT telescope and captured 25 separate 30-second exposures. He then stacked the 25 frames together to create this single zoomed-in photo of Comet Leonard: “Processing comet images is a challenge because even in the span of 12 minutes, the comet drifts across the frame relative to the background stars,” McCarthy tells PetaPixel. “Due to the comet’s motion, it has to be stacked differently. I tell the software to stack the images based on the comet position and star positions separately, which is then combined together to produce an image with the comet and stars both sharp.”

The fact that the comet was so low on the horizon from McCarthy’s vantage point also presented challenges due to light pollution and Earth’s atmosphere.

“In addition to stacking the images, it had to have software remove harsh background transients caused by thin clouds and light pollution,” McCarthy says. “There was also an orange cast to everything due to Rayleigh scattering, so the image had to be precisely color balanced to resolve the tail as anything beyond an orange smear.

“Once the background gradients were removed and the image was color balanced, by ‘stretching’ the histogram (brightening the image) I could bright out the faint irregular structure in the tail, distorted by a recent disconnection event.”

A Wider Photo of Comet Leonard Shot with a DSLR

In addition to a close-up look of Leonard, McCarthy also photographed the comet with a Canon 6D DSLR and a 135mm lens. 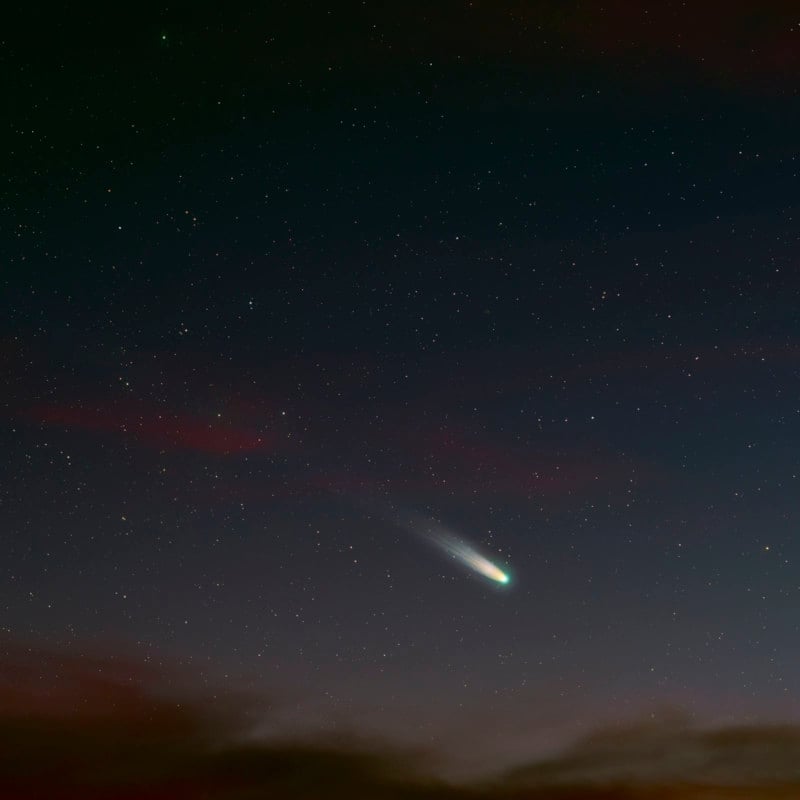 It was not a single exposure, though — stacking was still used to capture a clear, detailed view of the comet.

The photo “also contains about 12 minutes worth of images, broken up by about 70 x 10” exposures,” McCarthy says. “To freeze the clouds in place despite the shots occurring over a 12 minute period, everything was stacked against a single reference frame. This allowed me to add the context of the clouds for the scene while being able to incorporate enough data to the image to bring out the faint outer tail of the comet during processing without introducing more noise.

“Since this was so low on the horizon, despite having about 45 minutes between the end of blue hour and the object setting, I only had about 12 minutes of usable shots due to the thin clouds on the horizon, visible in the video as orange streaks.”

A Video of Comet Leonard as Seen from Earth

In case you were curious how much Leonard moved during the 12 minutes I shot it the other night. This is reversed, the comet is actually moving into the tail. The orange streaks are clouds. #astrophotography #space #opteam pic.twitter.com/9jhGR8Lpml

The orange streaks seen in the frame are clouds that were in the sky that night.

Comet Leonard, officially named C/2021 A1, was discovered on January 3rd, 2021, by University of Arizona astronomer G. J. Leonard from the Mount Lemmon Observatory northeast of Tucson, Arizona. It was the first comet discovered in 2021, and it was spotted when it was about 466 million miles (750m km) from the Sun.

Here’s an animation showing the comet’s path through our solar system:

Comet Leonard will be making its closest approach to the Sun on January 3rd, 2022. It has been within Neptune’s orbit since 2009, but once it swings around the Sun, the comet will be ejected from the Solar System, never to return again.

You can find more of McCarthy’s astrophotography on his website and Instagram. You can also support his work by becoming a patron through Patreon.