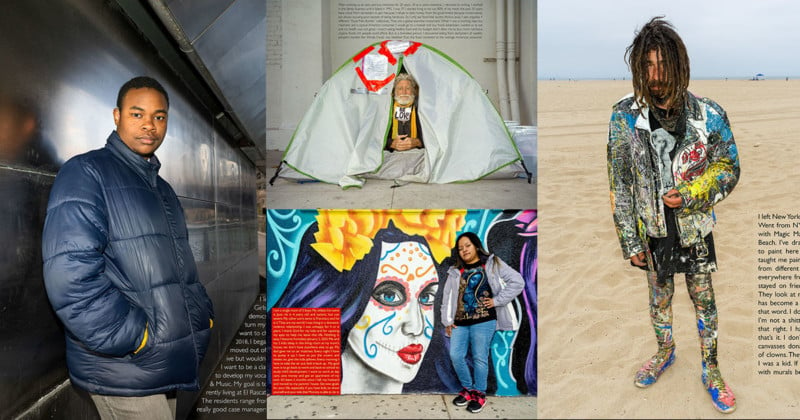 Photographer Jeffrey A. Wolin’s Faces of Homelessness is a photo/text series that focuses on people who are homeless or have been homeless in the past.

In January 2020, there were 580,466 people experiencing homelessness in America. Most were individuals (70 percent), and the rest were people living in families with children. COVID-19 disrupted statistics for 2021, and these would be available later this year.

Wolin, the Ruth N. Halls Professor Emeritus of Photography at Indiana University, interviews his subjects and includes their stories in their own words directly on the portraits. He has also used this technique in his previous long-term projects.

Editor’s note: To read the text on the photos, kindly click on the photo to see a higher-resolution version.

Homelessness is a sensitive subject, and Wolin does not want to walk the streets and capture random images of people sleeping on heating grates. Instead, he prefers to deal with organizations with a track record of dealing with the homeless, like the Chicago Coalition for the Homeless.

“CCH helped introduce me to individuals to photograph and interview, which helps with the issue of informed consent, an essential component of all my work,” Wolin tells PetaPixel. “I strive to establish a relationship of trust with the people I photograph and to portray them with dignity.”

“When I was at the George Eastman Museum running the photo studio and darkroom, I got to print Lewis Hine’s original negatives,” recalls Wolin. “That intimate contact gave me a deeper understanding of his work and his humanity and the way he approached vulnerable populations — child labor, recent immigrants.

“And I was most fortunate to have spent time with the legendary photographer, André Kertész, not long before his death. So, the approach to creative, humanistic photography runs deep in my work.”

“What I’ve added to that tradition is experimentation with peoples’ stories printed directly on the photographs, sometimes typographically, sometimes handwritten on the prints,” the photographer continues. “I learned from these masters of photography that people matter and that you don’t take advantage of people—you don’t mislead them.

“With the shows and books, people will be able to look at these faces and simultaneously read the visually built-in stories in the subjects’ own words and learn how individuals learn to live with and sometimes overcome traumatic experiences.”

Wolin explains that homelessness comes in different forms and not the stereotypical and often incorrect picture of being mentally ill or on drugs.

One may not even realize that a person is homeless when they are doubled up with friends and family. What about the ~16,000 kids in Chicago Public Schools who lack a permanent address? Several people that Wolin has photographed are working poor, with a full-time job but living in their vehicles or in tents.

Wolin hopes that his images can add to the public discourse about the causes and solutions to the homelessness crisis, which is not going away any time soon.

Faces of Homelessness is published by Kehrer Verlag.