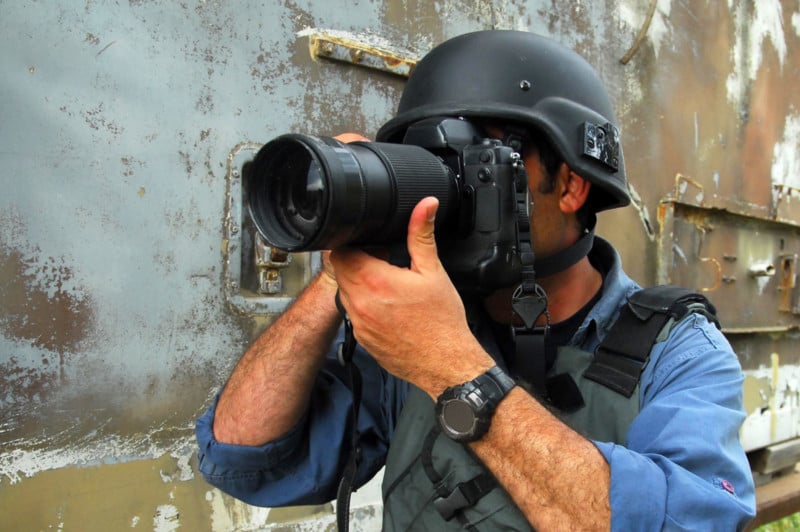 There are many debates about ethics in photography. One such debate is around making money on photos that show human suffering. It could be appropriate, but there are a few caveats you should consider before selling such work.


Put yourself in the shoes of a photojournalist who just took an image of a suffering child and who now has the chance to sell this photo to a famous magazine for good money. What do you do? Do you sell the image or do you donate it? Do you hide it altogether or try to directly help the victim depicted in the photo? This is a hard call to make, so much so that all four outcomes are possible depending on the exact details of the situation.

Let’s skip the part of when you should and when you should not take a picture. This is a separate issue in itself. Let’s assume you have already snapped the photo and now you have a chance to sell it to a newspaper or magazine. Put yourself in the shoes of a photojournalist who is facing this question now. You wouldn’t be the first, in fact–many photographers have thought about the line between bringing about change and making income off the photographs.

Read also: The Winning Photo of the $120K HIPA Prize Was Apparently Staged

What does a middle-class photographer care about the poor conditions of women in Yemen or children in African mines when their goal is to make money from their suffering? Possibly not at all if the goal is just to capture as much shivering imagery as possible.

You could be right in saying that some photojournalists work like this and it would be unethical. But this isn’t necessarily the case with everyone. In order to draw conclusions and raise ethical discussions, let’s dive into the history of a famous image that portrayed suffering and how it changed lives: both the photographer’s and subjects’.

Dorothea Lange and the Migrant Mother

This photo is perhaps one of the most recognized images in the world. Very few of us haven’t seen Dorothea Lange’s image of the Migrant Mother.

While there is debate on the authenticity of this photograph, the point is that this image made Lange’s career. The photo went on to win countless prizes and copies of it sell for thousands of dollars. It is fair to say that this is the most well-known photograph Dorothea Lange has taken.

On the other hand, the pictured woman’s identity — her name is Florence Owens Thompson — was unknown for four decades after the portrait was made. Not only that but also the woman in the picture never saw the end result or received any share of profits Lange made. So, in the end, we get a very powerful photograph that was a moneymaker for Lange and a subject who wasn’t impacted by the image at all.

In my opinion — and you may disagree — this is unjust. Photography, especially images of suffering are meant to be used as an instrument for bringing change. In this case, it would be fair if by being in the picture, the “Migrant Mother” would have gained something beyond worldwide recognition. Arguably, it was the Migrant Mother who made Dorothea Lange’s global fame.

Hence, I believe it was not entirely ethical for Lange to make money from the image of the Migrant Mother. It was, however, completely fine to create the portrait. Still, there is a serious argument to be made for Lange as she brought about a lot of change with the image. Perhaps not to the mother’s life, but for many like her.

Conflict needs attention. This attention can come in many forms, and one of them is photojournalists covering the event. Photojournalists primarily aim to capture conflict to highlight the value of human life.

Photojournalists have the power to mobilize humanity before it’s too late. Photographing disasters and suffering is a very powerful way of making an event in any corner of the world real. This is best shown by the extensive photographic coverage of the Vietnam War, in which photojournalism played a significant role in stopping the violent conflict.

Had photojournalists made no money from their work, they would likely not cover the conflict as much. However, it can be argued that some photojournalists went to cover conflicts solely because they knew they would capture images that would bring them fame.

Read also: Can(‘t) You See? Or, The Ethics of Photographing Vulnerable People

Photography, a Job That is Paid Like All Others?

Photographers take pictures for a living. This is their 9 to 5. Just like a policeman puts their life at risk, photographers sometimes put theirs on the line as well. Ultimately, they are not charity workers as they travel on assignment to capture and voice change around the world. Photographers document what’s happening, and it is only after they document it that they can help people around themselves.

There are guidelines about images of suffering in place, they forbid posing the subjects, encourage if not ensure consulting subjects on how they want to be portrayed, and so on. Part of the reason these rules are in place is that photographers can take advantage of human suffering and take voicing change too far. Taking it too far means crafting an image that doesn’t document what’s happening but exaggerates the truth for emotional impact.

Of course, an image that creates a strong emotional impact can generate income. But photographers should never try to make a scene more “impactful” in order to gain popularity or income with the images. I tend to believe that if someone photographs conflict for the sole reason of personal gain, they should abstain from the genre completely.

Photojournalism is first and foremost about informing and change, not about making money. There is a fine line between being a paid photojournalist and creating faux-photojournalism for money.

Ultimately, it comes down to you. What are your motives? Thinking and being honest with yourself will lead to the true answer about whether it is ethical or not to make money from your images of suffering. Even then, you need to always be sensitive to the issue and the commercialization of the photograph.