Dorothea Lange’s 1936 photo Migrant Mother is an iconic photo of the Great Depression. The Nerdwriter made this fantastic 6-minute video that tells the behind-the-scenes “story of how Dorothea Lange created perhaps the most iconic photograph in American history.”

The video tells of how Lange went from shooting portraits of the upper class in San Francisco to being hired by the US government for its propaganda effort during the Great Depression — the goal was to photograph the poor rural workers in order to raise public support for government aid.

And on a drive home with completed work ready to be developed, Lange passed a camp of destitute pea pickers in California. It was during 10 short minutes spent at the camp that the now-famous portrait would be made.

After setting the stage, Nerdwriter then looks into exactly how Lange went about photographing the mother, Florence Owens Thompson, and her children by examining the small set of images Lange took while she was with them. 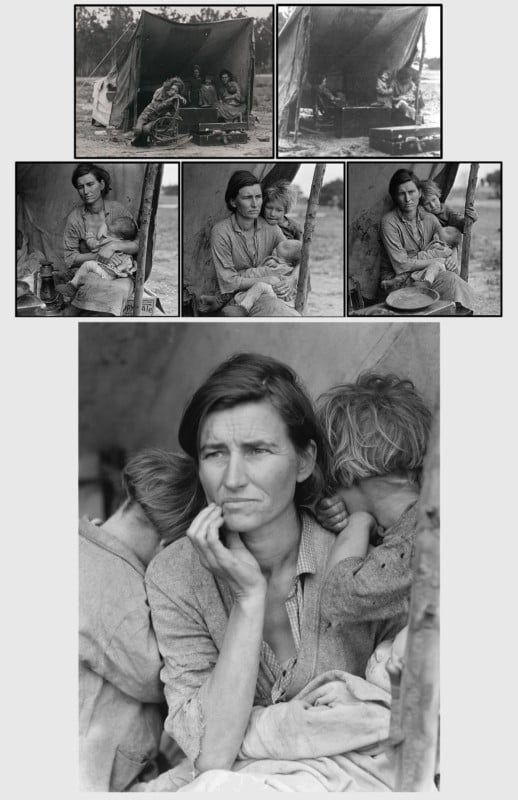 As we shared recently, the portrait that became Migrant Mother was “Photoshopped” to remove Thompson’s left thumb from the log in an effort to remove distracting elements from the frame.

“Being able to actually see the steps of Lange’s craft enhances her work,” Nerdwriter says. “It gives the photograph a third dimension.

“[Migrant Mother] came to define the Depression in the American consciousness. And on a deeper level, it became the archetypal image of struggling families in any era.”

Film vs Digital in Music Photography: I Shot the Same Show With Both