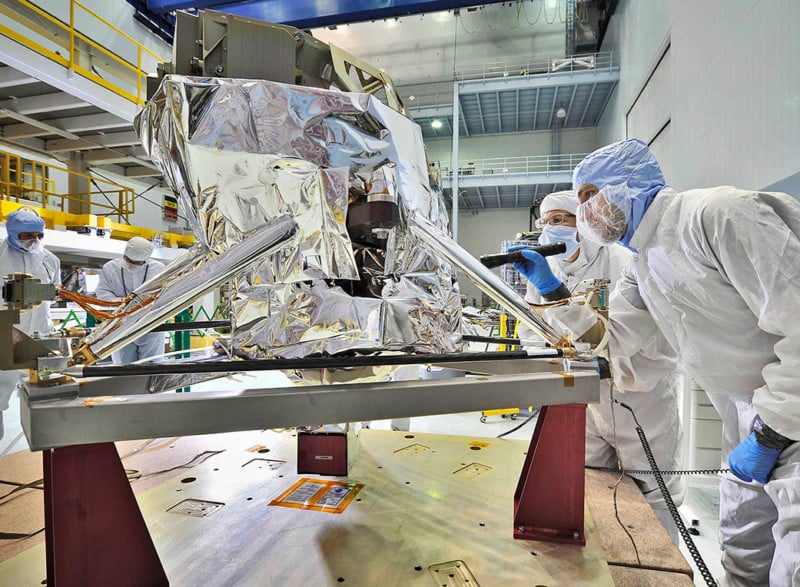 NASA’s soon-to-be-launched James Webb Telescope is set to fly into space this month and begin its tasks of collecting infrared light from the distant corners of the cosmos. But to do so, it needs to get very, very cold.

The James Webb Telescope is the successor to the Hubble Space Telescope and is the largest space observatory ever made. NASA says it will be the “coolest camera in space,” and while the vernacular use of the term might be correct, it also had to be tested to be literally the coldest: the telescope had to be cooled down to almost the coldest temperature matter can reach before one of its tools, the mid-infrared instrument (MIRI), can properly operate.

NASA explains that many of the cosmic objects out there — such as stars and planets as well as gas and dust from which they are formed — emit infrared light, also called heat radiation. Unfortunately, most other warm objects also emit it, meaning Web’s four infrared instruments can detect their own infrared glow.

In order to reduce these emissions, the instruments have to be really cold: about 40-degrees Kelvin or minus 388 degrees Fahrenheit (minus 233 degrees Celcius).

“To operate properly, the detectors inside the mid-infrared instrument, or MIRI, will have to get even colder: less than 7 kelvins (minus 448 degrees Fahrenheit, or minus 266 degrees Celsius),” NASA explains.

That is just a few degrees above absolute zero, which is the coldest temperature that is theoretically possible to reach, though has never actually ever been attained since it represents the complete absence of heat.

“Temperature is essentially a measurement of how fast atoms are moving, and in addition to detecting their own infrared light, the Webb detectors can be triggered by their own thermal vibrations. MIRI detects light in a lower-energy range than the other three instruments. As a result, its detectors are even more sensitive to thermal vibrations. These unwanted signals are what astronomers refer to as ‘noise,’ and they can overwhelm the faint signals that Webb is trying to detect,” NASA continues.

Once in space, the Webb Telescope will unfold a huge sun shield that is about the size of a tennis court that will block MIRI and other instruments from the sun’s heat, which will allow them to passively cool. About 77 days after launch, MIRI’s cryocooler will spend an additional 19 days lowering the temperature of the instrument to less than seven degrees Kelvin. Then, it will be ready to start making observations.

The cryocooler itself is an incredible technological achievement, and uses helium gass to carry heat away from the instrument’s detectors. NASA has a detailed webpage that explains how it works for those interested in delving deeper into the technologies that support the new space camera.

“There were a couple of challenges working on a system that spans multiple regions of the observatory,” Analyn Schneider, MIRI’s project manager at JPL, says.

“Those different regions are led by different organizations or centers, including Northrop Grumman and NASA’s Goddard Space Flight Center, and we had to interface with everybody. There’s no other hardware on the telescope that requires that, so that was a challenge unique to MIRI. It’s definitely been a long road for the MIRI cryocooler, and we’re ready to see it perform in space.”

The James Webb Telescope launch has been delayed several times, but is currently scheduled to take place on December 24.