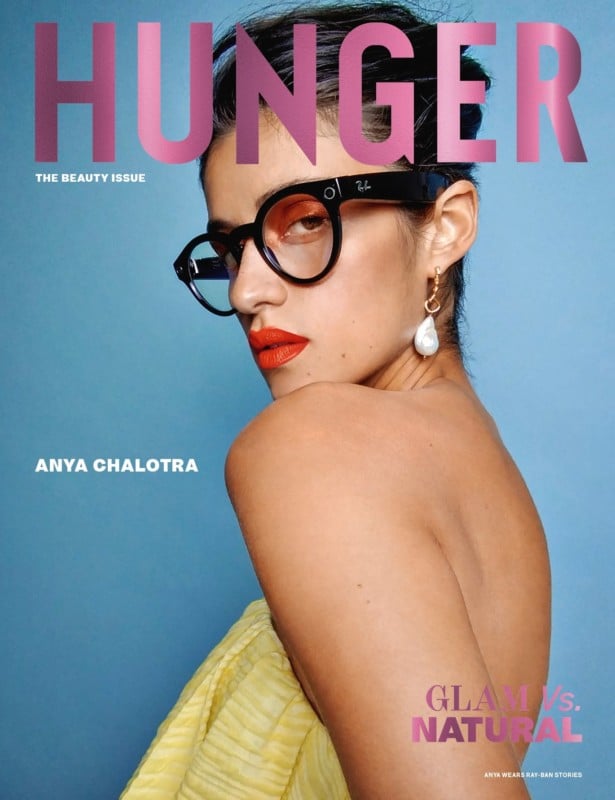 Facebook and Ray-Ban’s partnership into eyewear launched in early September with the Ray-Bay Stories glasses. These smart glasses launched in 20 different combinations in classic Ray-Ban styles — Wayfarer, Wayfarer Large, Round, and Meteor — and five colors with a range of lenses including clear, sun, transition, and prescription.

The glasses integrate a pair of five-megapixel cameras that Facebook positioned as mainly designed to let the wearer capture everyday moments as they happen from a first-person perspective. In addition to photos, the glasses can also capture up to 30-second videos. The camera can be activated either with the capture button on the glasses themselves or hands-0free via Facebook Assistant voice commands.

At no point were these glasses ever strongly marketed as high-end imaging devices, as clearly five-megapixels is well below even what lower-end smartphones currently offer. Still, that did not seem to deter Rankin.

Facebook tells PetaPixel that the photo is an industry first and new experience for both the photographer and social media brand.

“The November issue brings to life what Ray-Ban Stories can create in the hands, and face, of a professional photographer,” a Facebook representative tells PetaPixel. “Rankin’s photography spotlights how the stylish smart frames, capable of shooting a magazine cover, can seamlessly fit into everyday life.”

The magazine cover, which features British Actress Anya Chalotra who is known for her role as Yennefer of Vengerberg in the fantasy drama series The Witcher on Netflix, was shot in Rankin’s United Kingdom studio. Chalotra is also photographed wearing Ray-Ban Stories on the cover and across the four-page editorial spread available now on newsstands in the UK.

“I like trying new things and this is what I did with Ray-Ban Stories, it’s the first time a cover has been shot using smart glasses as a camera. The glasses are great, and I look forward to seeing what the next generations of Ray-Ban Stories can do,” Rankin says.

The cover is one of several alternative covers that Hunger is running for its Beauty Issue. The full set of cover photos can be seen on Boutique Mags.