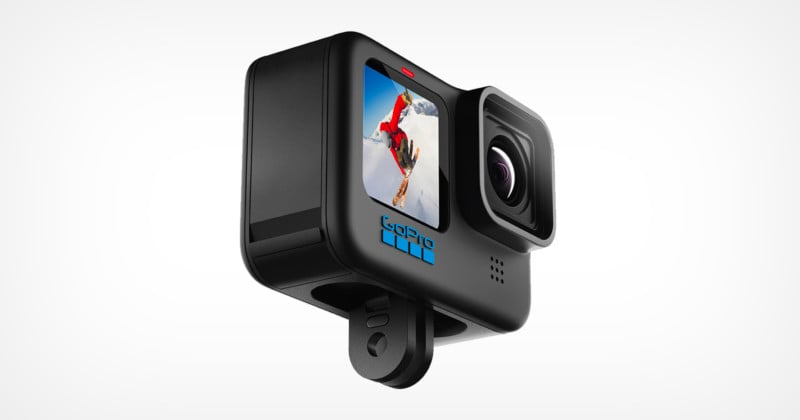 GoPro has announced the availability of a new beta software update for the GoPro Hero 10 that adds support for the Max Lens Mod, the 5.3K SuperView digital lens, and additional frame rates across several resolutions.

The GoPro Hero10 Black launched in mid-September and boasted a larger 23-megapixel photo resolution and a better processor that allowed for 5.4K video to be captured at up to 60 frames per second and 4K video to be shot at up to 120 frames per second. While the camera was reviewed positively by PetaPixel’s Ryan Mense, it didn’t support the filmmaker-preferred 24p framerate. That changes with this update, along with a few other bonuses.

The update adds Max Lens Mod compatibility to the GoPro Hero 10, which increases the field of view to an ultra-wide 155-degrees. The update supports stabilization and the GoPro’s Horizon Lock feature as well. After the update, users can replace the standard lens cover with a Max Lens Mod. Before the camera can shoot with the mod, users will first need to swipe down on the camera’s rear touch screen and tap the Max Lens Mod icon.

GoPro says that all 24 frames per second settings for the Max Lens Mod will be available in a future firmware update. Auto-upload is not supported with this version of the firmware.

Finally, GoPro is adding 5.3K SuperView Digital Lens via the update. The SuperView digital lens is a 16mm view that takes GoPro’s widest and tallest field of view and frames it in a 16:9 aspect ratio video. GoPro says this results in an ultra-immersive, full-screen shot that capture “more of everything.” The company says that in order to access it, tap the digital lens icon any time during a 5.4K video capture and use the slider to select SuperView.

Because this update is a beta, it cannot be accessed through the GoPro Quik app and has to be manually updated to the camera. GoPro says that those who are unfamiliar with this process should visit its detailed explanation page that shows how to perform the update. As a note, GoPro specifically says not to download the firmware that is linked on that instructions page, but instead to use this link.

Full release notes can be found on GoPro’s website.