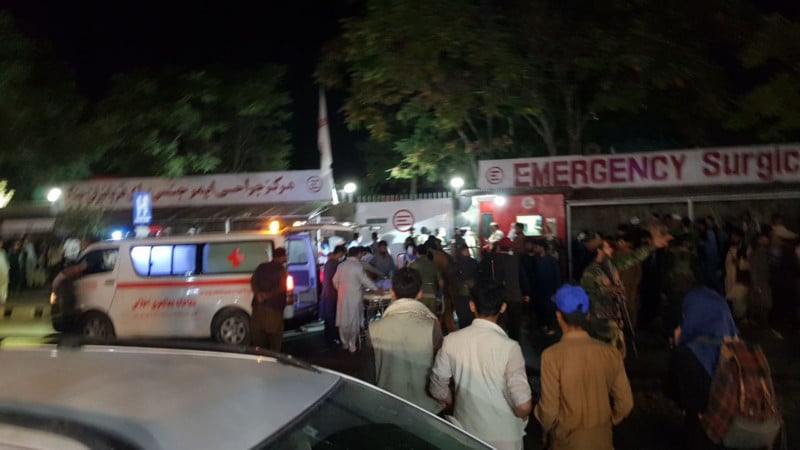 Devastating photos and videos emerged from Afghanistan as the Taliban regained control of the country and U.S. troops prepared to withdraw in August 2021.


A video of 19-year-old Zaki Anwari and others falling to their deaths as they clung to the side of a U.S. evacuation airplane circulated in the news and on social media. Then, a week later, after an attack at the Kabul airport killed at least 169 Afghans and 13 U.S. military personnel, images of Afghans being wheeled off to hospitals, bodies lining the street, and blood filling a nearby sewer beamed across media outlets.

Through these photos, Afghan suffering was hypervisible; however, the news stories accompanying the photos largely focused on American soldiers’ suffering and the loss of American lives.

As a media scholar, my research focuses on coverage of Afghans and other underrepresented groups. And as a professor of journalism studies, whose work focuses on ethics and global journalism, I guide my students through critically examining the role of journalism within societies and how we can more fairly represent the people and communities we write about. The recent coverage of Afghanistan has brought to light how sharing images of suffering – especially without the right context – can perpetuate inequality and harm.

The day after the attack at the airport, the Washington Post, the Boston Globe, the Chicago Tribune and other outlets ran headlines like “13 US troops die in Kabul attacks” and “Kabul blasts kill at least 13 US troops.” Accompanying these headlines were photographs of the aftermath of the attack but not of U.S. soldiers, as the headlines suggest.

Instead, photos of injured and crying Afghan families gathered around lifeless bodies accompanied these headlines. Images of injured Americans were missing; photos of Americans who died were somber images of coffins draped in U.S. flags, not of people themselves.

Images of dead or suffering Americans, especially during times of war, are often seen as too unsettling. In fact, an 18-year media ban that prohibited photographs of the returning coffins of American soldiers was just lifted in 2009. The military suggested that the ban protected the privacy of the dead and their loved ones, while opponents argued that such practices attempted to conceal the real impact of the wars in Iraq and Afghanistan.

Hiding the suffering and deaths of some from public view while showing others creates a value system in which certain lives are viewed as more valuable and worthy of respect and recognition.

The Normalization of Afghan Suffering

In my research, I’ve found that during the past 20 years of the war in Afghanistan, Afghans have been used as rhetorical and visual tools to justify ongoing war in the country. Instead of nuanced, complex portrayals of Afghans as individuals, they are often portrayed through tropes as helpless, backward, or in need of saving.

This perceived “otherness” is often emphasized during times of war to support and justify military action. Some media amplify these stereotypes of Afghanistan and the region and rely upon dehumanizing portrayals. Media coverage reducing women to victims and depicting Afghan men as hostile enemies, for example, makes Afghan suffering seem inevitable.

The Ethics of Publishing Graphic Images

Photographs and videos can help capture an emotion that words may not, however unsettling they may be. But it’s important to consider how these images are shared – for example, with the consent of family members, or without warning and played on repeat. Thinking about whose bodies are displayed in states of suffering raises important questions about the boundaries of publishing and engaging with graphic images – as well as who is worthy of dignity and respect in death.

Some images are too difficult to bear witness to, and often these are the ones that are too close to home. Discussing a photograph of a young Salvadoran father and daughter whose lifeless bodies were photographed in the Rio Grande, Washington Post columnist Paul Waldman suggested that we are able to look at these types of images “because they were not American, and therefore there’s just enough distance for the agony not to overwhelm us.”

People have a finite capacity to process and share in feelings of despair – a phenomenon known as compassion or empathy fatigue. Viewing graphic images may contribute to this feeling, as people may become overwhelmed and shut off from engaging with the issue at hand.

About the author: Azeta Hatef is Assistant Professor of Journalism at Emerson College in Boston, Massachusetts. The opinions expressed in this article are solely those of the author. This article was originally published at The Conversation and is being republished under a Creative Commons license.