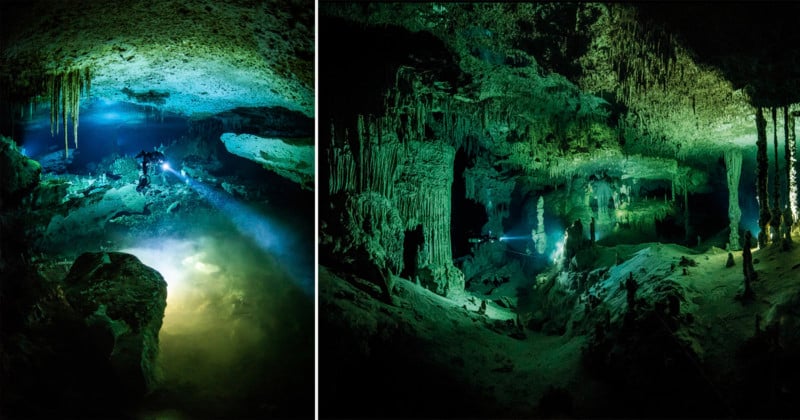 In the world of social media, it is unfortunately easy to take everything for granted, including the technical and logistical difficulties of making quality photos in the middle of the jungle or in remote villages.

Underwater photography in general, but even more so in cenotes, caves, or wrecks, requires a special kind of effort along with the most demanding safety standards; lighting in such environments is, except very rarely, artificial and must be set up by a pro all the while coordinating (non-verbal in the silent world) with the photographer. The model thereafter must place themselves in the indicated area, have an impeccable buoyancy, make sure not to exhale under the decorations (stalactites) nor have any physical contact whatsoever with the cave or surroundings.

Editor’s note: A cenote is a large sinkhole or cave, usually found in sedimentary limestone rock, that has filled with cool, clear groundwater and rainwater over time.

In our case, we are fortunate to have Mauro Bordignon: a one-man light crew with 120K lumens in various big blue dive lights, a rebreather, and all the experience required to model underwater.

And so our adventures begin: Departure from the east coast of the peninsula towards the center, first stop in a cenote recommended not far from Valladolid – one of the first cities of Mexico, with five centuries of history.

Early in the morning, we left the city for the South. It is a one-hour drive, half of it in the middle of the jungle, on a path built in Sascab (Karst powder path, used by the ancient Mayans and nowadays very common in ranchos and off-road, due to its low cost and its ease to filter rainwater).

We got a tip from a local lumberjack on the way out, who recommended that we go to a village half an hour away to “a lady’s house” (for reference: he described the house as the one with an almond tree and an orange tree in front: “you can’t go wrong”) and ask for access to her family’s property. Her, or a member of her family, or the neighbor, et cetera (the exact details here remain unclear to this day, but permission was given).

Indeed, everything was worth the detour, and the experience: the cenote was indicated to us with approximate yet accurate directions, save for the depths. We discovered after going down that the 24-meters we were told to expect of the entrance of the cave is actually closer to 30-meters, which was slightly problematic for our calculations of consumption and decompression.

The cave was absolutely divine, and the pictures, after a few minutes of the setup of our lamps, come out clear — another stroke of luck after three hours of searching and driving around in 38-degree Celsius heat. 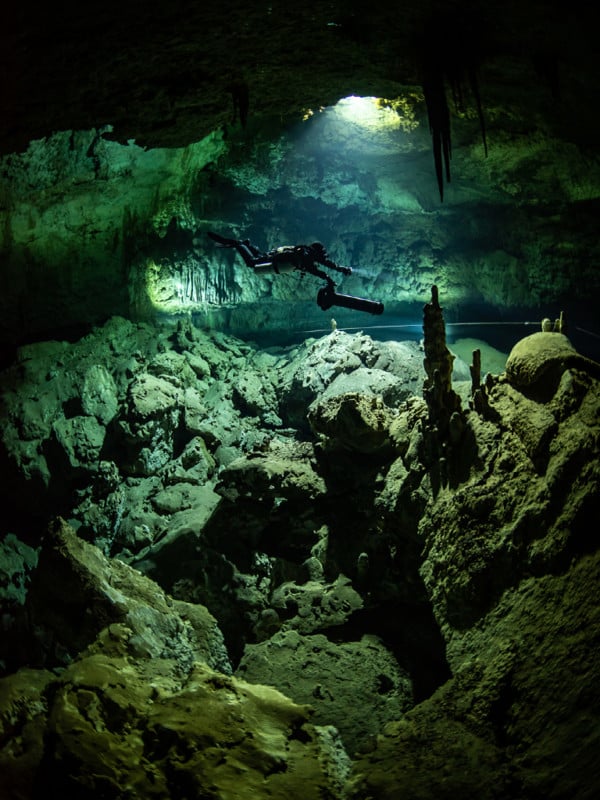 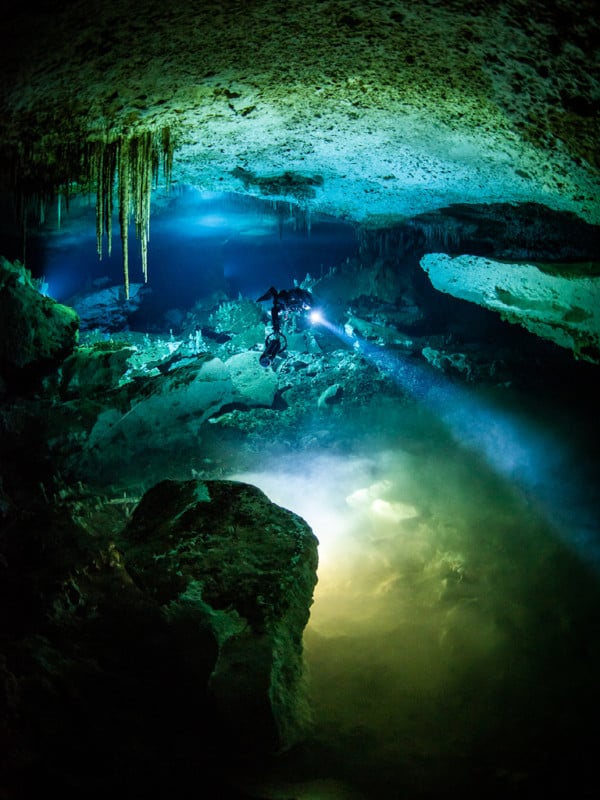 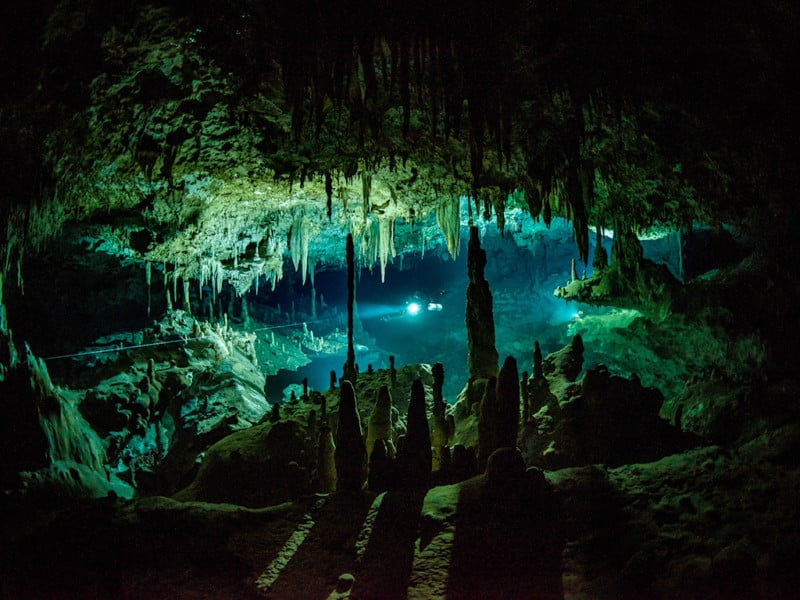 We returned the second day, but it was much less fruitful. We explored three additional cenotes, but none of them were among those which had been recommended to us, and heavy rain made access unpleasant and difficult. We finished a third day empty-handed between two tropical rainstorms, a long road, empty tanks, and nothing to show for it other than a great breakfast and the memories.

Disappointing, but an opportunity to return! 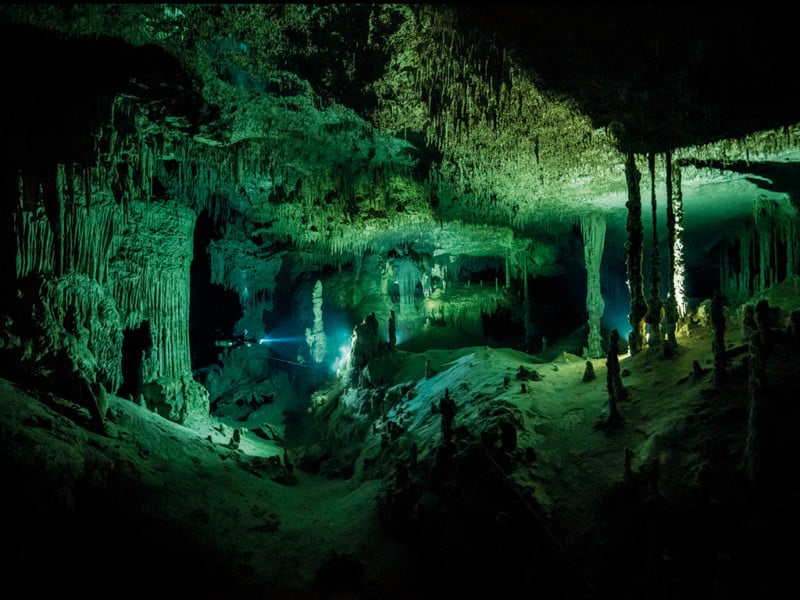 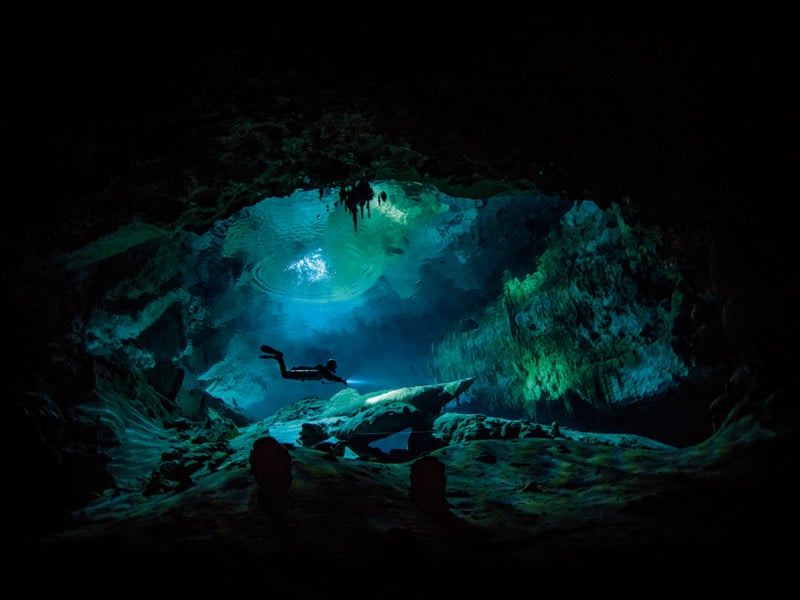 Background: The photos above were captured for the Festival Xiimbalil-Ja by MalixArt and Joram Mennes, who will host a presentation of the photos in Mexico City in January of 2022, on Paseo de la Reforma at the feet of the Angel of Independence. The goal is to share visuals of the underwater landscapes that are not easily accessible to the majority of the population and raise awareness about the conservation of precious freshwater resources and maintain their beauty which is more often than not taken for granted.

Xiimbalil Ja Festival, Kaxan Ts’ono’oto’ob (from Mayan – strolling through Water, Discovering the Cenotes), is a private artistic initiative by MalixArt, with the support of the Yucatan State Government, Secretaría de Fomento Turístico.

About the author: Joram Mennes is a professional cave and cenote photographer. His photos have been published by National Geographic and exhibited in Moscow, Berlin, Mexico City, Izamal, Merida, and Valladolid. He currently resides on the east coast of the Peninsula where he teaches cenote photography workshops and guides divers. More of his photography can be seen on his Instagram.