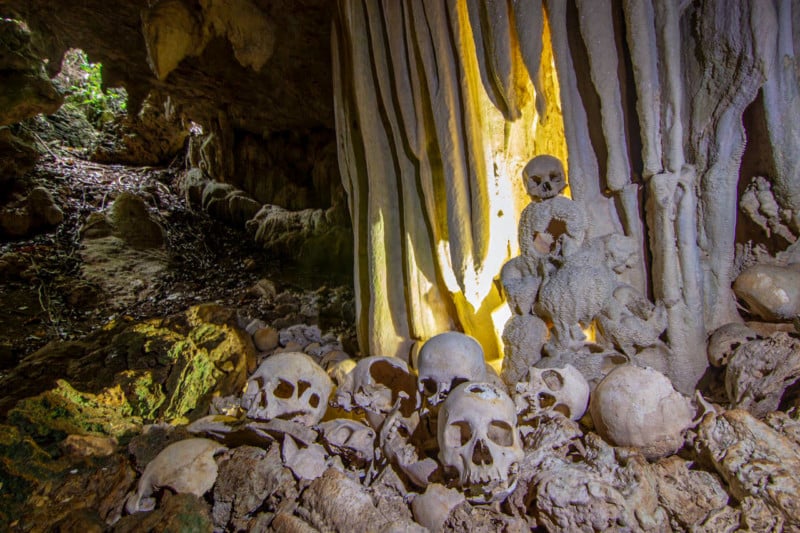 Jeff Milisen, an underwater photographer and ocean nerd, was holidaying in Papua New Guinea when his guide offered to walk him through caves full of skulls. Animal skulls, you mean? No, human skulls!

“These were once the heads of real people with lives and families and aspirations,” says Milisen. “On the other [hand], you aren’t going to get this sort of experience while vacationing in Hawaii, or Disneyland, or anywhere else for that matter.”

An Unprotected and Mysterious Photo Location

“As a westerner, it is crazy to think that the caverns have no special protections or restrictions. Caves stacked with human skulls aren’t all that unusual in a country that embraces its recent past with cannibalism. Even though Papua New Guinea has since shaken that aspect of its culture, it remains a wild place to foreign eyes.

“The images evoke a mysteriously dark mood. Nobody knows who the skulls belonged to, only that they are from roughly 100 years ago. The assumption is that they were somehow the result of cannibalism, but there were no other bones, just skulls.

“The head is the place of consciousness, knowledge, and personality. Photographically, the face and eyes, in particular, are the gateways to forming an emotional connection. They should be the focus of any portrait. This connection certainly played a role in whatever ritual formed the sight, to begin with, in the same way, that it draws the viewer into the final image.”

Milisen saw two caves on that day. One of them merely had skull pieces scattered around, but the other was different — it had intact skulls arranged around a beautiful limestone pillar that had a bone-like quality. Milisen, who mainly shoots underwater, dealt with it like a CFWA shot.

Close Focus Wide Angle (CFWA) is a popular technique in underwater photography. These photos are often shot with ultra-wide-angle lenses at about two feet from the subject.

The photo was shot with a Canon 7D Mark II DSLR and a Tokina 11-17mm lens.

“The cave was a black, blank canvas, so I got to paint the image with whatever light I wanted,” explains Milisen. “Primary and fill lighting was provided by two cheap off-camera flashguns, and a third backlight was provided by a 10,000-lumen static light placed in the limestone pillar.”

Milisen feels that the environment and human remains deserve respect. The skulls were very delicate, and many were showing signs of weathering to the elements, and any disturbance would have been disastrous.

“Even though nobody has any recollection of who these people were, no remains were disturbed, moved, or touched,” says Milisen. “In a few years, photos like these will be all that remain of these people. As photographers, we want to tell a story, but that story is never more important than preserving the areas where we work.”