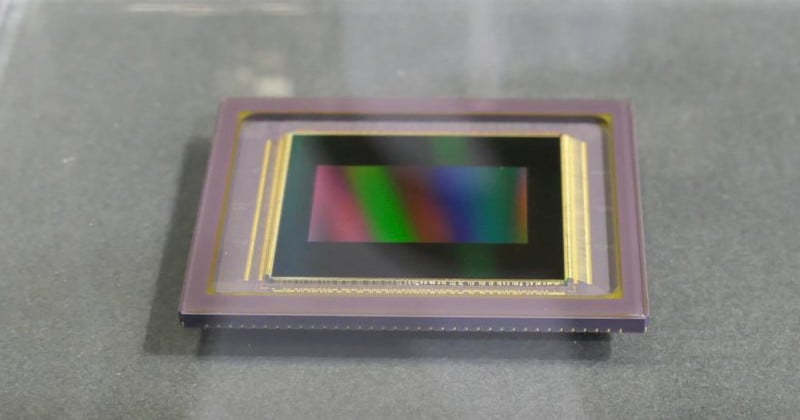 Panasonic claims that its currently in-development Organic Photoconductive Film (OPF) CMOS uses a unique structure that will allow it to achieve high resolution, wide dynamic range, and a global shutter. Basically, it would be a game-changer.

The company recently showcased the OPF sensor during the 4K/8K Video Technology Exhibition in Japan where the company says that the super-35 sensor (which features a resolution of 8,192 x 4,320 pixels and up to 60 frames per second capture) uses a “unique structure.” That structure is made up of an organic thin film that performs the photoelectric conversion and a circuit unit that stores and reads out those charges, but different from previous sensors, those two structures are completely independent.

“Our unique technology that changes the OPF sensitivity by switching the voltage of the OPF on or off realizes a global shutter that needs no charge storage node to temporarily hold the signal charge in each pixel,” Panasonic says.

“By leveraging our unique layered structure, we have developed in-pixel gain switching technology,” the company continues. “Switching between the high-gain mode (45 ke-) and the low-gain mode (450 ke-) makes it possible to capture images with wide dynamic range according to the scene.”

Panasonic says that this unique technology also allows for the seamless adjustment of neutral density values, which would eliminate the need for an optical ND filter in the camera.

In the diagram below, the company shows how the structure of its sensor is different from a backside-illuminated CMOS, a design that is common in modern digital cameras. 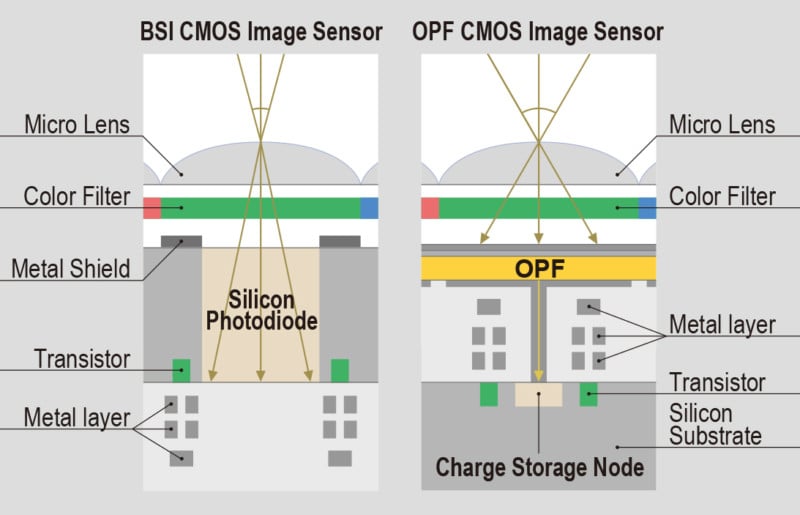 The company says that it has embedded its high-speed and low-noise readout circuit technology in a wide circuit area of each pixel. By adopting an organic material with a high light absorption rate, the photoelectric conversion layer is thinned to a fraction of that needed in a silicon photodiode, which in turn allows a wider light incident angle than the conventional silicon photodiode. Panasonic claims that this enables faithful color reproduction without “optical crosstalk” while efficiently using incident light from a wider angle.

Panasonic also says that it will be able to capture clear and accurate images even in high-contrast scenes.

“Conventional silicon sensors with a global shutter function require a capacitor to temporarily hold signal charges in each pixel, so the photodiode cannot be made large and it is difficult to widen the dynamic range,” Panasonic explains. “However, due to our unique technology that allows all the pixels to be shuttered at the same time by controlling the OPF’s sensitivity, the OPF CMOS image sensor does not require a capacitor to temporarily hold signal charges. This results in a much wider dynamic range. This technology realizes both global shutter and wide dynamic range characteristics at the same time.”

The technology behind the OPF sensor sounds promising, but it’s not the first time Panasonic has promised this sensor. In fact the company has been showcasing it on and off over the last eight years, as noted by Fuji Rumors.

“At this moment, the implementation of this sensor to LUMIX is not yet determined, though we are studying possibilities,” Panasonic tells PetaPixel.

Panasonic says that it has made recent developments that have advanced its ability to put the OPF sensor to some practical uses, but it’s unclear how much longer it will take to make enough progress to bring this sensor to market. Given Panasonic’s statement, it’s probably safe to not expect it any time soon.