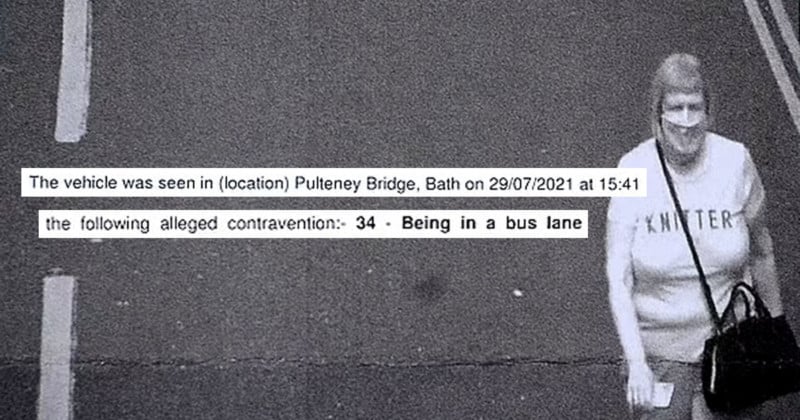 Cameras with AI image recognition are found everywhere these days, from the smartphones in our pockets to factory floors. But whenever artificial “intelligence” is part of the equation, there’s a chance for hilarity to ensue.


The Daily Mail reports that a 54-year-old UK man named David Knight from Dorking, Surrey, recently received a £90 (~$125) fine. His offense: driving down a bus lane in the city of Bath 120 miles away.

He had not been driving down a bus lane in Bath, so Knight looked closer at the photographic evidence printed on the notice. He was surprised to find that it didn’t show his car at all, but rather a woman walking down the road.

It turns out the traffic camera had mistaken the woman for a car due to her shirt, which had the word KNITTER across the front. Knight’s car has the license plate KN19TER, and it seems the woman’s bag strap caused the camera to see “KN19TER” as the “car’s” license plate.

A perfect "WTF?!" story for a Monday morning…

Couple with KN19 TER number plate hit with a £90 fine after an ANPR camera snapped a pedestrian walking in a bus lane wearing a 'KNITTER' t-shirt: https://t.co/KbCWBKtsRF

Luckily for Knight, the local government agreed to cancel the fine as soon as the error was brought to their attention.

“The fine had already gone up from £60 to £90 because we hadn’t paid within 30 days,” Knight’s wife, Paula, tells the Mail, adding that the government staff member on the phone “burst out laughing” when she learned what had happened. “Obviously no one had looked at the picture and it had been computer generated.”

If you need a smile today… Paula and Dave received a fixed penalty notice in the post. A CCTV camera had caught "them" driving in a bus-lane in Bath. Except it wasn't their car. In fact it wasn't a car at all. #BBCNews @BBCPointsWest @BBCRB pic.twitter.com/5rks7xsbcx

Another recent example of an AI camera failing humorously is when a soccer tracking camera mistook a referee’s bald head for the soccer ball and began following the ref around for broadcast viewers instead of the action.

Computer vision technology has transformed modern life, but stories like these are a good reminder that artificial intelligence aren’t a perfect replacement for human eyes and minds… yet.