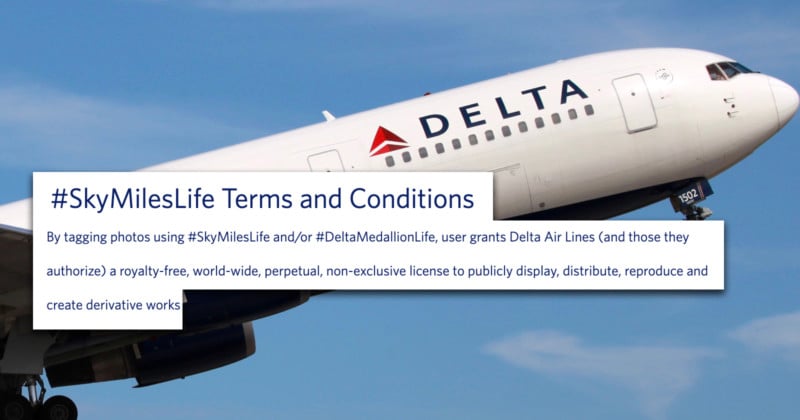 Delta Airlines is the latest in a long line of companies who have egregious overreaching rights grabs baked into a program that uses Instagram hashtags. The company claims massive rights to any images that are tagged using #SkyMilesLife.

Corporate overreach into the rights of photographers is not uncommon and has occurred numerous times over the past decade. In 2015, the New York Times published an article that brought awareness to the situation where brands will publish this kind of user-generated content without explicit permission by hiding detailed and complicated terms behind fine print and leveraging social media hashtags to do so.

In 2019, Hilton Hotels was caught in a similar situation. The Museum of Modern Art (MoMA) likewise recently solicited photographers to share photos on Instagram under monthly themes, but claimed significantly more rights than it appeared at first glance.

This time, Delta Airlines has asked its customers to share photos of their favorite moments and tag #SkyMilesLife for a chance to be featured by the company’s social media presence and “inspire” others to take trips around the world.

On the surface, this is a pleasant and harmless gesture, but Delta — who has advertised this program on billboards in airports as seen by David Bergman via an Instagram Story — backloaded the call to share with fine print that says Delta would gain substantial rights to those images:

By tagging photos using #SkyMilesLife and/or #DeltaMedallionLife, user grants Delta Air Lines (and those they authorize) a royalty-free, world-wide, perpetual, non-exclusive license to publicly display, distribute, reproduce and create derivative works of the submissions (“Submissions”), in whole or in part, in any media now existing or later developed, for any purpose, including, but not limited to, advertising and promotion on Delta websites, commercial products and any other Delta channels, including but not limited to #SkyMilesLife or #DeltaMedallionLife publications. Delta reserves the right to use or not use content tagged #Skymileslife and/or #DeltaMedallionLife and user will not be entitled to compensation if photo is used.

User grants to Delta (and those they authorize), the irrevocable and unrestricted right to use, re-use, publish and re-publish, and copyright his or her performance, likeness, picture, portrait, photograph, in any media format, in whole or part and/or composite representations, in conjunction with my name, including alterations, modifications, derivations and composites thereof, throughout the world and universe for advertising, promotion, trade, or any lawful purposes.

The above are just two sections from a rather detailed set of paragraphs that hand over rights to photos in a way that most photographers who don’t read or don’t see the fine print will not expect. At the time of publication, 107,185 photos were listed under the #SkyMilesLife hashtag.

In the past, PetaPixel has sought the input of NPPA General Counsel Mickey Osterreicher regarding hashtag rights overreach, who said that photographers who see this kind of language have every right to be alarmed. The terms grant unlimited permission to use the photo in any way the company chooses without any remuneration, and also place all the liability for any improper use on the photographer and shifts it away from the company.

“Unfortunately, this is the typical overreach that we see far too much use of online,” Osterreicher has said. “It is a rights grab that is often not read or understood. It not only harms those who submit their work for free and then makes them liable for the possible misuse of that work but also undermines those who do value their work by licensing it.

“In a supply and demand economy, this virtually destroys the market with a glut of free images. The contract could certainly be written differently but that will only happen when people stop agreeing to these unfair and onerous terms.”

The company might argue that it is simply trying to protect itself, but the key point here is that Delta does not need to phrase the “contract” to have such overarching rights to images, but unless the company and those like it are repeatedly called out for the overreach, none of the entities have any incentive to change policy. Additionally, Delta’s fine print says the photographer is not entitled to any compensation if the photo is ever used.

“Clearly if there wasn’t value to these images, why would they be asking for them and these rights?” Osterreicher has told PetaPixel.

Delta Airlines did not respond to PetaPixel’s request for comment.

“Just as people would not agree to buy a car, lease an apartment, or purchase a house without understanding the terms of those written contracts, so too should they read and understand these online agreements,” Osterreicher said. “If the car payments are too much, the lease too long, or the price of the house too high, commonsense dictates that you try to negotiate better terms or walk away. These online uploading or #hashtag ‘opportunities’ are no different.”