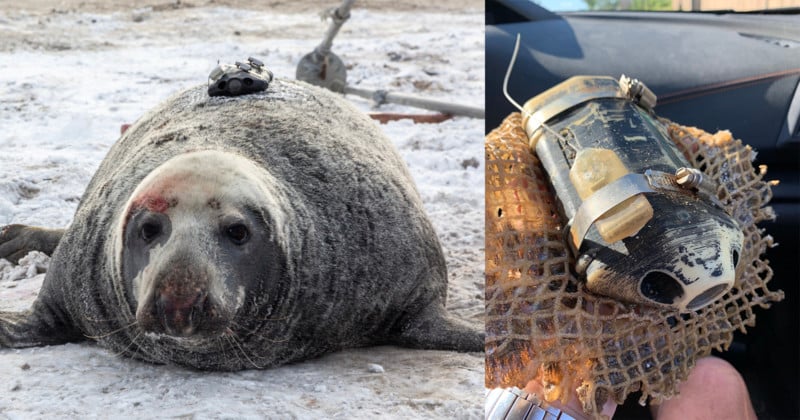 A scientist from Halifax, Canada, has recovered a seal-mounted research camera lost in the ocean three and a half years ago. The camera was found to hold 19 hours of valuable research footage he never thought he would see.

Department of Fisheries and Oceans biologist Damian Lidgard tells CBC News that he had attached the small camera device to a young male grey seal on Sable Island Canada on December 31, 2017.

The camera, which is valued at $10,000, is used as part of an Ocean Tracking Network research project that follows the movement of grey seals that are part of a large colony near Sable Island. The goal of the project is to gather as much information as possible about how the seals move, where they go, and what they eat.

The plan was to wait for the seal to come back to shore so he could recover the device — which includes a camera as well as another meter that records dive depth, water temperature, acceleration, and other research data — but Lidgard says he never found the seal again.

“Basically for the next three or four weeks, every single day, I searched Sable looking for that male and never found him,” Lidgard says.

It is speculated that the camera fell off when it molted in the spring. Lidgard believed the camera was lost forever, until this past summer when it was pulled off the ocean floor by a Clearwater Seafoods ship called the Arctic Endurance that was fishing for surf clams.

A crew member contacted the manufacturer of the camera — Customized Animal Tracking Solutions (CATS) — who put him in contact with Lidgard.

Lidgard says that he was “shocked” that the camera was recovered and even more surprised to find that it still works and can be redeployed next month for another research stint.

“There were some marks on the camera, but generally it was in very good shape,” he says. “My first impression was that it’s survived remarkably well, given that it’s been at the bottom of the sea.”

The camera was sent to the manufacturer in Australia who was able to download the data from its onboard memory storage. While Lidgard had not expected to find much, the camera had 19 hours of video footage stored on it, broken down into 20-minute clips. He received the full batch of files a few weeks ago and is still going through the data.

“The camera worked remarkably well and managed to keep that data for three and a half years,” Lidgard says.

The video shows information that is not available from other sensors: the footage shows that the seals appear to sleep at the bottom of the ocean near the floor, rolling gently with the current.

“The dive profile of a sleeping seal is like a U-shape,” Lidgard says after watching the footage. “The seal goes down to the bottom, spends time at the bottom, then comes up to the surface. That is a remarkably similar dive profile to a foraging seal. So without video, you can’t say if you see it as foraging or if the seal is sleeping. But now we can based on this video footage.”

While other technologies like satellite transmitters and time-depth recorders can be helpful, a lot has to be assumed. But with a camera, he and other researchers can actually watch what is happening and confirm behavior.

“With the video camera, I can sit at my desk and actually watch this animal out at sea, behaving, diving deep, foraging, chasing females,” Lidgard continues. “I don’t have to make assumptions about what the seal is doing.”

Lidgard says that the camera will be redeployed next month when it is attached to a female seal, which will return to shore to give birth. At that time, it will hopefully be able to be retrieved again. The predictability of the pregnancy and birthing habits will hopefully provide a more predictable and less stressful means of assuring the camera’s return — this time without a three-and-a-half-year wait.