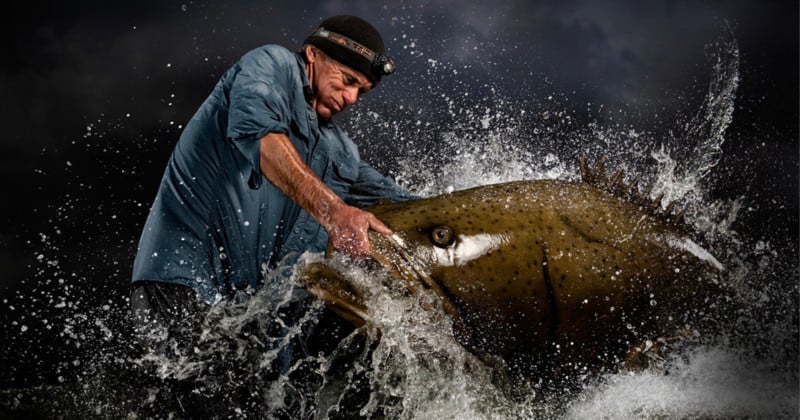 Lighting as a thought process is fundamentally easy to apply to schemata. Water is not. Sure there are the physics that govern the drops via gravity and pull them back to Earth properly, but the abstract way that this is done is a logistical nightmare when combined with good ole electrons. Sure water makes for dynamic imagery when lit well, but what doesn’t get seen is the grey hair that the photographer grows as a result of the set.

When the call came from Discovery to shoot the ad campaign for their show River Monsters, I was thrilled. The concept was strong and the comps that we were to key off made visualizing the final image easy. However, creative potential and potentially dangerous walked hand in hand on this campaign. The idea was to have the show’s host Jeremy Wade wrestling a giant fish in the shallow waters near South Beach, Florida. Now by giant, I mean the kind fish that hangs out with the Stay Puft Marshmallow Man on the weekends… probably having a glass of wine with its flippers and talking about the delicacies of krill. Where things get complicated is that we wanted to have Jeremy and mega fish in the water thrashing around…. lit. Obviously, we didn’t want a bathtub with a toaster situation, so safety would come first, creativity second, after all electrocuting an actor is not a good way to land another job (the industry tends to look down on these sort of things).

Knowing that this set would be determined by the quality and work ethic of the people on it, I flew assistants in that I had worked with on previous shoots. We approached the lighting situation with Photoflex Tritons, for their safety, weight, and flash duration (we would be freezing splashing water). We had a scout look for beaches with long gradations to the shore line and went to multiple locals just to walk into the water to his waste level. Background would not be important, as we would fade to black behind the subject. For cameras, I brought both the Nikon D3x and D3s to back it up. Never on a shoot had I expected to destroy a camera more than this, so redundancy would play key to making sure I came home with the shot, even if the camera was a paperweight. 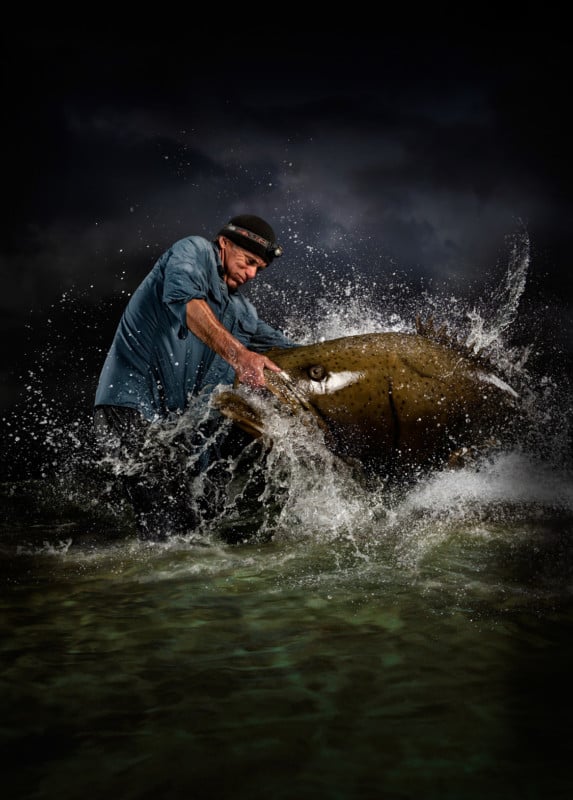 While planning lighting on a napkin is a fun practice as a thought experiment, it really it tough to account for the dynamics that water brings into a shot, both for drama, and for lighting. Essentially water turns every light on set into a specular highlight factory, where reflections abound when it is heavily placed behind the subject. While I have shot a number of times with large water elements (like on the Deadliest Catch). The River Monsters photoshoot was a bit different because the shot would be partially submerged in the water and I needed to have the angle on the kickers nailed perfectly for the image to pop. In order to prepare myself for this, I devised a plan to practice the set while in Arizona, so there would be no surprises on set. To do this, I went over to my assistant’s house at over the span of a couple of nights. He has a black hibachi grill in a very open backyard that we pretended was the fish from the photo. I would set up lights over and over again, and he would stand there with a garden hose, watering the grill so that we could measure the angle we needed for the water to be its most dynamic. While it made for a lot of mud, it also taught me that the lighting ratio for water is significantly different than one would shoot in the studio-based off the key light’s power. With a bare head light behind a splash, you are essentially not losing any power.

After three nights of practice, We had settled on a lighting schemata that played up the drama, yet didn’t overwhelm the frame. We would have Jeremy lit by a large octabox and filled by a small strip with a white bounce on top of it. From there, the sides would each have a light with a medius strip dialed very low to give the image depth. Finally we would blend a pair of lights behind him with a standard reflector for one and a small octabox to soften up the highlights.

With lighting, safety and concept behind us, it was up to Jeremy to make the action, and he did it masterfully. Often he would bring advice and reality to the table that we could not have thought of in our wildest dreams… mostly because I have yet to catch a 350 lbs. grouper, and also because I don’t fish. However, one comment amongst all the others stood out to me… All of us (7 people, 1 fish) were waist deep in the water at night in the Florida ocean and Jeremy looked up at me and said, “you know, these are perfect conditions for a Bull Shark….” to which I replied, “haha, and when’s the last time you caught a Bull Shark?!?!”…. he replied, “I caught one here….. last night”. At that point, without any direction from me, the entire set moved about 10 feet closer to shore.

We shot for only a couple hours, not due to a time crunch, but because Jeremy, the creative director, and rest of the crew worked so well together that in two hours we had a solid 30 images that would work for the ad. Since we were in the ocean, laptop previewing would be impossible, but seeing the shots out of the back of the D3x, the CD was able to see that we had the shot directly out of the camera. Although this image was not the final one chosen because of the main subject’s address to the fish, it shows the strength of a RAW file, and gives an idea to the situation around us: 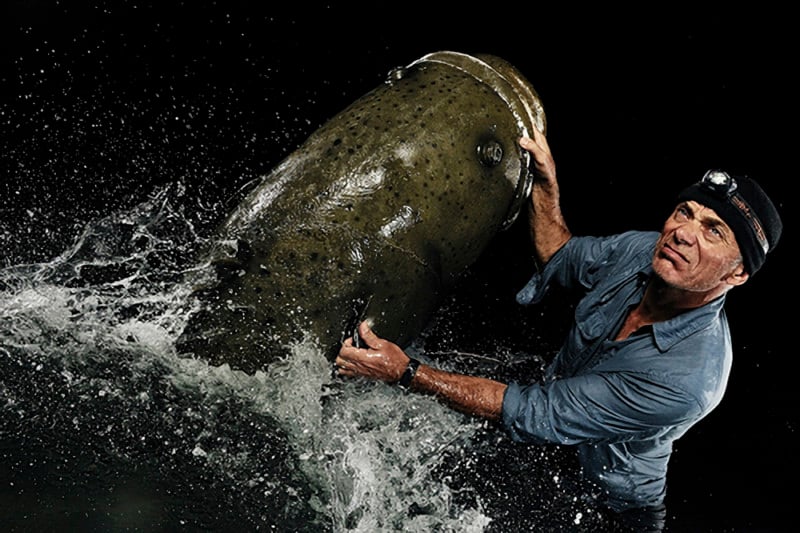 I wish I could take 100% credit for this shoot, but, as in every shot, it is the quality of the people around you that make the image. So, Jeremy, Mike, Linas, Bryan, Matt, Grant, Paul and Lisa, here is your shot and thank you.