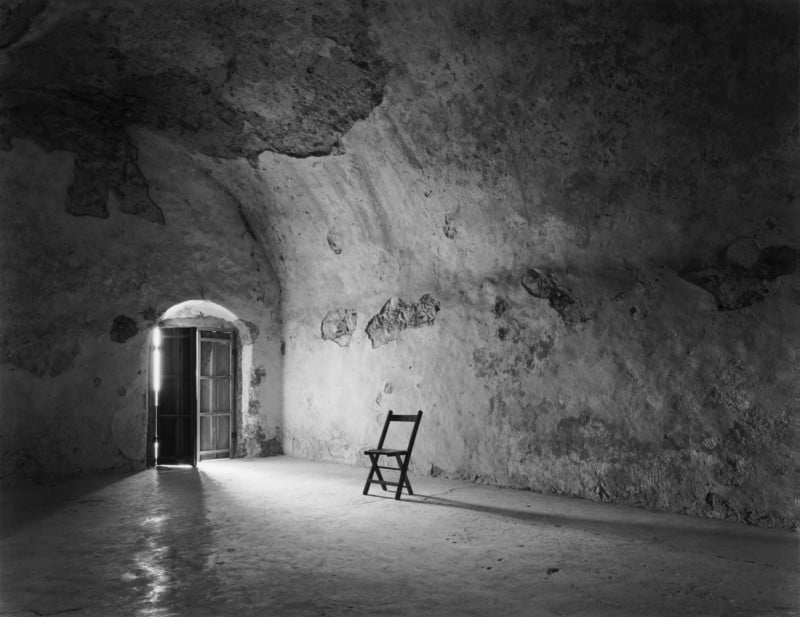 I believe it would be fair to say that I am known mostly for my landscape work, from broad “grand landscapes” to abstracts in the slit canyons. But throughout most of my career, I’ve also photographed human-made settings extensively. On a workshop I presented in the Yucatan Peninsula of Mexico in 1994, I took the group into the Convento San Miguel in the village of Maní.

Maní is so small that it doesn’t even appear on maps of the area. It lies between the famous Mayan ruins of Chichen Itza, in the center of the peninsula, and Tulum, on its east coast. I discovered it by chance on a scouting trip for the workshop in 1993, driving from one major Mayan ruin to the other. But Convento San Miguel, which is bigger than the village, is the real attraction at Maní. Its construction began in 1562, shortly after Cortez’s Spanish conquest of Mexico. Today it is a school, a church, a ruin, and a village meeting center. It is in use daily. Amazingly, the authorities gave us full permission to wander anywhere in the structure and photograph whatever we liked.

In the 1994 workshop, I wandered around working with problems or questions from students but also looking for photographs myself. I incorporate that as a teaching/learning tool during workshops, inviting students to see and discuss what I find is a worthwhile image. Of course, students are scattered around during the field sessions, so only a few can take part in such discussions when I make an image. Consequently, in those days, I also made a 4×5” Polaroid image of each negative I exposed, to show students who had not been there so we could discuss any aspect of the image that interested them. At the end of each field session, as we boarded the chartered bus that took us from place to place, I would pull out the Polaroids I had made that day and passed them around the bus so they could discuss the imagery.

During the field session in Convento San Miguel, I wandered into the room where the image was made. It was a bare, rectangular room with a barrel-vaulted ceiling from end to end, peeling plaster on all walls, one door into the room on the side of the room (the one which I entered), and another door on the shorter wall of the rectangle leading out to a balcony. There were no windows.

Several students were working on compositions in the room, which contained folding chairs scattered randomly. At one point, after working with one student, I looked up and saw the chair and its shadow exactly where it was in the room. It may have been moved, perhaps several times, by students prior to my entering the room, or even while I was working with a student, but I had not touched it. And yet, the moment I saw it, a whole story unfolded in a flash before my eyes: the great classical cellist, Pablo Casals, had been sitting in that chair practicing the Bach cello suites. He had just finished, gotten up, and walked out of the door leading to the balcony (the one admitting light into the room), and I could still hear the music echoing in the room.

Instantly, I yelled out, “DON’T TOUCH THAT CHAIR!” That chair, together with its shadow, in that bare room, told a full story. But the door was swinging wildly open and closed due to strong winds. So I first set the tripod where I wanted to place my camera, then walked out onto the balcony to find a small piece of plaster (such pieces were everywhere) to shove under the door, as an anchor to prevent it from moving. I found the right-sized piece, and carefully placed it so that the door blocked bare light from streaming toward my lens from the fully opened door. (You can see it under the door.)

Then I made my exposure, knowing I would eventually print it in 11×14” size. I also made a Polaroid of the setting. The Polaroid was usually a rather poor example of what I had pictured in my mind as the final image, but this one was rather good (I used a very low contrast Polaroid film for that exposure). I discussed the image with some students who were still in the room, even encouraging them to make an exposure of it, or any variation of it, if they saw fit.

That was it. That’s the story behind the image. But there are two follow-ups I feel are of such integral importance that they each need further discussion. The first is that upon returning to the bus at the close of our session at the Convento, I pulled out the Polaroids I had made and handed them to the first student in the front seat so they could be passed around the bus for discussion. At the back of the bus was a student who had come with his wife, who was not a student in the workshop (but welcomed, like any non-participating wife, husband, relative or close friend) to join in the fun and discoveries of the workshop. When the Polaroid came to her, she stopped at the one of the chair and shadow, burst into tears, and cried out, “I’ve got to have the photograph.” I was stunned. I pointed out that I hadn’t even developed the negative yet! But she again said, “I have to have the photograph.”

I said, “How about this: When I return home, I will develop the negative and print it as an 11×14” image. If I like it, I’ll send it to you. If you like it, please pay me. If you don’t like it, please send it back.” She agreed. It took weeks, but I developed and printed the image … and liked it. I mailed it to her and received a check.

Quite honestly, I don’t know exactly what struck her as so moving that it elicited tears. I never asked. But it was obvious I had made an image that provoked a strong emotional reaction. I think it says something about the emotional power a photograph can have.

The second follow-up occurred about three years later. During a workshop at my home/studio I was showing prints one evening, discussing questions students had about any aspect of each image. One of the images was this one. I put it up, saying nothing (as I usually do as I show images), waiting for students to make comments or ask questions. One student rose from his chair, walked slowly up to the print, and said, “I can see Pablo Casals sitting in that chair practicing the Bach cello suites” and then he continued to describe what he saw in that image, ending up by saying, “And when he finished, he walked out of that door, and I can still hear the music.”

I stood there dumbfounded! He had described exactly what I had felt, even using the exact words I had used to describe my feelings. He had never been to a prior workshop, and I had yet to write about this image in any magazine or other venue. He came up with those words solely on his own!

What does this say? To me, it harks back to the opening words of my book, The Art of Photography: “Photography is a form of non-verbal communication.” Apparently, I had communicated something, and apparently, it was communicated so effectively that the receiver (the student) used my exact words to describe what he got out of the image. To this day, I shake my head in disbelief.

The article courtesy of Medium Format Magazine. The Medium Format Magazine is #1 magazine dedicated to the finest medium and large format photography. Inside you will find an exclusive and in-depth interviews, articles and imagery by the best photographers in the world such as Edward Burtynsky, Christopher Burkett, Nick Brandt, Dan Winters, Cooper & Gorfer, Robert Ascroft, Tim Tadders, to name a few. Use the PETAPIXEL20 code for a 20% discount off the annual subscription.