A Canon patent application has been published that shows a radical pass-through design integrated into a full-size camera. The goal of is stated to be one that would make it easier to grip the camera from different positions.

Originally spotted by Asobinet and Canon Rumors, the patent describes a design that would aim to secure a good grip in any of a horizontal position and a vertical position. Because of what Canon describes as an “L-shaped opening,” the design would hold much like a steering wheel. According to the company, the design would make it easier to take photos without the risk of dropping the device when changing from a vertical to a horizontal position, or back. 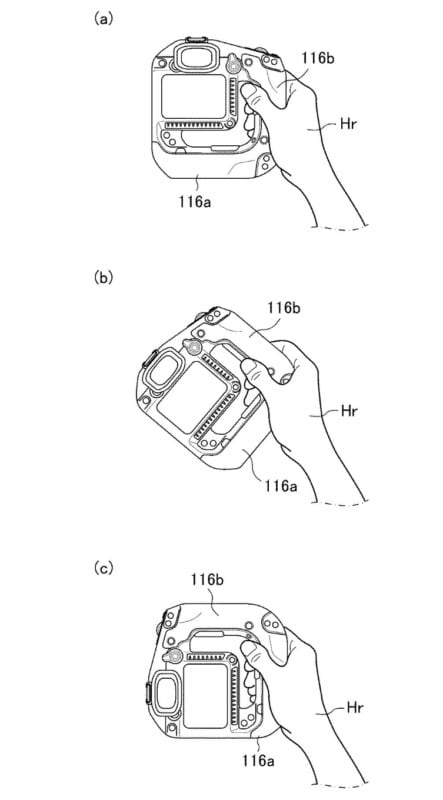 The provided images in the patent show a square-like body shape that was used by the 1D series but is also shared by the forthcoming EOS R3. The patent illustrates multiple angles on how the camera could be held as well as where Canon would place different buttons and access points. Of note, around the right side and bottom of the rear LCD, Canon points to what the patent drawings make look like cooling vents (marked as 120a and 120b in the diagram above), but they are instead “touch sensors” that would be adjacent to the opening around the grip. The bar-like nature of the description draws a direct correlation to the Touch Bar on the EOS R, a feature that many described as a good idea on paper that did not quite translate to real-world use.

“I have yet to find a perfect way to integrate the Touch Bar into my workflow, but I have to say that it’s a solid idea and the customization you can do with it is impressive,” Jeremy Gray said in his review on Imaging Resource.

The issue with the Touch Bar was sensitivity: either it was too sensitive and would easily be hit unintentionally, or it wasn’t sensitive enough and did not make any of the features that could be programmed into it any easier than a button or a dial. The amount of touch space shown in the patent above is multiples larger than the one on the EOS R, and perhaps Canon learned enough from its first experiment to make a second-generation more useful.

The parts marked as 111a and 111b are described as an “operation unit” integrated into the grip, but details on what that might mean are absent. The rest of the design looks very similar to what would be expected out of a camera launched today, minus the hole in the body: it still has a typical viewfinder, rear LCD, multiple buttons on the back, top, and parts of the grip, and card slots on the side opposite the grip. 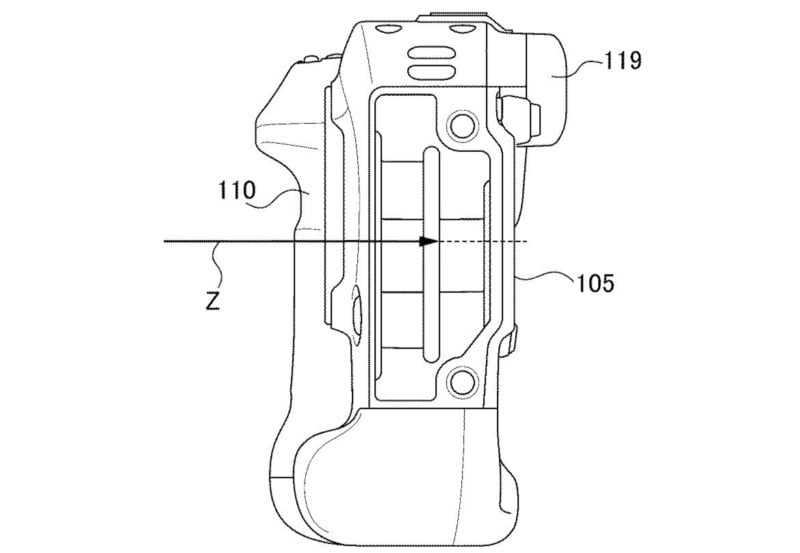 This design shows a huge departure from how cameras have been typically designed. While there have been multiple unique camera designs proposed in the past, the “rectangular box with a grip” has been the longest-standing choice for camera manufacturers the world over. While this patent doesn’t stray from that general idea, adding a hole into the body certainly would classify it as unusual, unique, and unexpected.

The full patent can be viewed on JPlatPat.