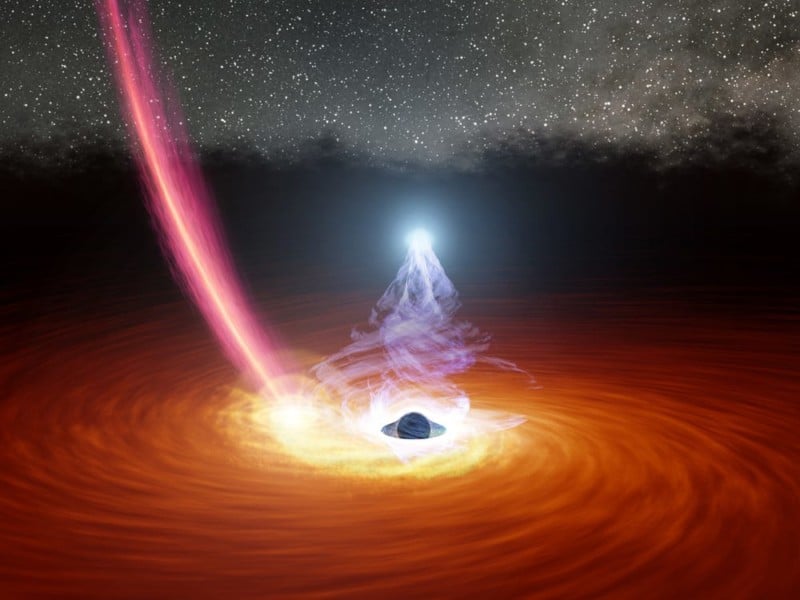 Astrophysicists have successfully observed light coming from behind a black hole. This observation is the first of its kind and proves Albert Einstein’s theory that huge objects can warp space since no light can pass through a black hole and come out the other side.

Stanford University astrophysicist Dan Wilkins noticed a series of bright flares of X-rays, which by themselves are exciting but not unprecedented. But his telescope then recorded something unexpected: additional flashes of X-rays that were smaller and in different “colors” than the bright flares.

These secondary light “echoes” were consistent with X-rays that would be reflected behind the black hole, but as Stanford’s Taylor Kubota explains, even a rudimentary understanding of how black holes work tells the average observer that seeing light behind the massive gravitational objects should not happen.

Researchers observed bright flares of X-ray emissions, produced as gas falls into a supermassive black hole. The flares echoed off of the gas falling into the black hole, and as the flares were subsiding, short flashes of X-rays were seen – corresponding to the reflection of the flares from the far side of the disk, bent around the black hole by its strong gravitational field.

“Any light that goes into that black hole doesn’t come out, so we shouldn’t be able to see anything that’s behind the black hole,” Wilkins says. “The reason we can see that is because that black hole is warping space, bending light and twisting magnetic fields around itself.”

This discovery, which was published in a paper on Nature on July 28, is the first direct observation of light that is coming behind a black hole. To this point, the possibility was theorized by Albert Einstein but never proven. According to Einstein’s theories of general relativity, massive objects — such as black holes — will warp the fabric of space-time and curve paths, rather than linear ones, that objects travel.

Wilkins says that he was not intending to prove Einstein’s theory, but was just trying to learn more about the features of certain black holes, specifically one called a corona. In this case, coronas are formed around black holes as material falls into them and creates some of the brightest continuous sources of light in the universe. This light is “bright” only in the sense of how much light there is, as it is X-ray light and not visible to the human eye. It is nonetheless captured and logged, so while it is not a traditional “photo,” the data can be analyzed and used to both map and characterize a black hole.

This observation was, therefore, not traditionally photographed like what would be seen out of visible light spectrums captured by telescopes such as Hubble. Instead, the X-rays that were observed can only be charted and rendered, such as this one published by Wilkins. Other charts and figures of the observation are included in the Nature publication.

Black holes themselves have been photographed in the past, however. In 2019, the first photo of a black hole was published after years of international collaboration between over 200 international astronomers.In March of 2021, the same telescope used to capture the first image was used to create an even more detailed photo that was able to show the black hole’s magnetic fields.

“Fifty years ago, when astrophysicists starting speculating about how the magnetic field might behave close to a black hole, they had no idea that one day we might have the techniques to observe this directly and see Einstein’s general theory of relativity in action,” said Roger Blandford, a co-author of the paper Stanford professor of physics and SLAC professor of particle physics and astrophysics.

The research just presented will not be the end of the study. Wilkins and Blanford will continue their research with future observations using the European Space Agency’s Athena telescope that will launch into orbit around earth in 2031.

“It’s got a much bigger mirror than we’ve ever had on an X-ray telescope and it’s going to let us get higher resolution looks in much shorter observation times,” said Wilkins. “So, the picture we are starting to get from the data at the moment is going to become much clearer with these new observatories.”’