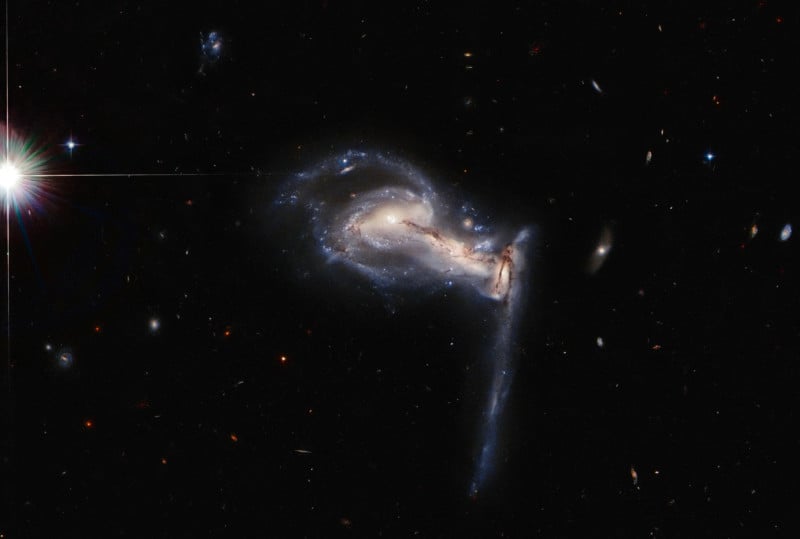 NASA has published a spectacular image that was photographed by the Hubble Space Telescope that shows what the space organization describes as a three-way tug-of-war between interacting galaxies.

Hubble captured the dramatic triplet of galaxies — which is known as Arp 195 — and is featured in the Atlas of Peculiar Galaxies, which is a list that shows some of the stranger and weirder, though no less wonderful, galaxies in the universe.

That Atlas was written by Halton Arp and published by the California Institute of Technology in 1966 and contains a total of 338 galaxies. The entire purpose of the Atlas was to show photographs of different kinds of odd or unusual structures found in galaxies in the universe. While there are many photos of unique galaxies found in that Atlas, this latest photo shows Arp 195, which is located in the Lynx constellation about 747 million light-years from Earth.

After the Hubble team successfully turned on backup hardware aboard the telescope, the observatory got back to work over the weekend and took these galaxy snapshots.

Hubble’s team originally posted the black and white version of the photo on July 19 which was featured as part of the celebration of the satellite’s return to full functionality after it went offline for over a month due to a software error. On June 13, 2021, Hubble went offline due to a glitch in its payload computer and NASA’s team spent weeks attempting to fix it. The error almost took down the legendary satellite for good, but scientists were able to bring Hubble back from the brink on July 16.

Observing time with Hubble is extremely valuable, so astronomers don’t want to waste a second. The schedule for Hubble observations is calculated using a computer algorithm which allows the spacecraft to occasionally gather bonus snapshots of data between longer observations. This image of the clashing triplet of galaxies in Arp 195 is one such snapshot. Extra observations such as these do more than provide spectacular images – they also help to identify promising targets to follow up with using telescopes such as the upcoming NASA/ESA/CSA James Webb Space Telescope.

This #HubbleFriday view shows a triplet of galaxies, called Arp 195, caught in a gravitational tug-of-war game.

It’s featured in the Atlas of Peculiar Galaxies, which showcases some of the weirder galaxies in the universe: https://t.co/3hYBoCsc66 pic.twitter.com/SDSHazfgYc