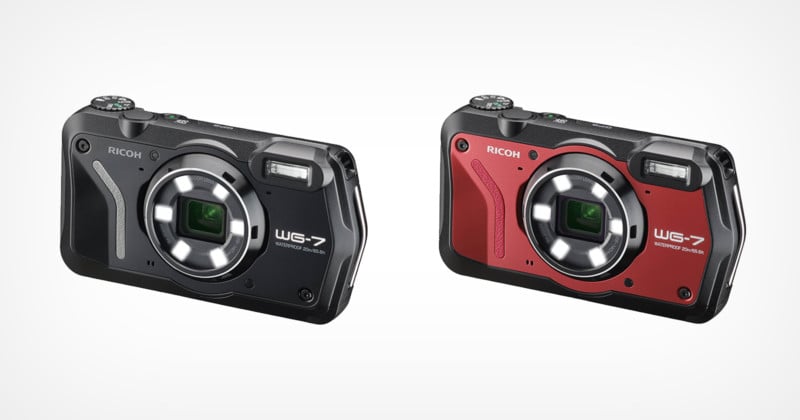 Ricoh has announced the WG-7 waterproof compact camera that it touts as capable of continuously recording for two hours underwater at a depth of up to 20 meters (65 feet). Ricoh also positions it as a webcam and it even comes equipped with a built-in ring light. Unfortunately, it appears exclusive to Japan.

Spotted by Pentax Rumors, The WG-7 is touted as a “high grade” tough and rugged camera that is both waterproof, dustproof, and freeze-proof down to -10 degrees Celcius. As noted, it can continuously record video for up to two hours at a depth of 65 feet, survive drops of up to 2.1 meters (about 6.9 feet), and can sustain up to 100 kilograms (about 220 pounds) of force. That tough body has what Ricoh calls an easily gripped shape that makes it easy to hold both bare-handed as well as gloved, and the operation of the camera supposedly follows suit.

The 3-inch, 1.04 million dot rear LCD has adjustable brightness and designed to allow monitoring in any weather condition. It also has an anti-reflective coating applied to reduce glare. 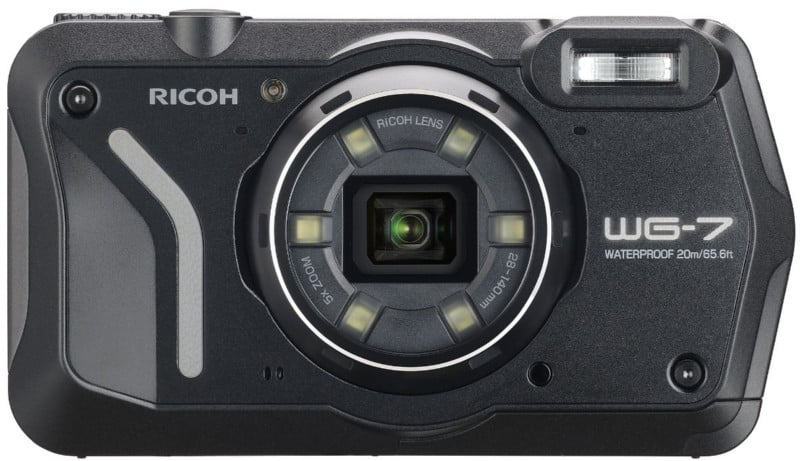 The 20-megapixel 1/2.3-inch sensor has a maximum ISO of 6400 and is equipped with what Ricoh calls “super-resolution” technology that it claims will result in clear, high-quality images with better resolution by combining multiple images that are taken in quick succession and combining them in-camera to create an image with “less blurring.” It also features a handheld night view mode.

That sensor is capable of capturing 4K video at up to 30 frames per second that can be stabilized with digital shake reduction. Ricoh says that it is possible to reduce shake even when the camera is experiencing intense movement, “like a gimbal.”

The variable 28-140mm lens (five-times zoom, and focal length is a 35mm equivalent) is comprised of 11 elements in nine groups and is surrounded by six large variable ring lights that are designed for close-up photography. These are designed to allow for faster shutter speeds to reduce camera shake when photographing subjects that are close or at a very short distance away. Additionally, Ricoh says that the amount of LED light is more powerful by a factor of 10 compared to the standard WG-70 model.

Ricoh positions the WG-7 as great for not only adventure and use in tough environments like construction sites, but also for standard office use thanks to its built-in webcam functionality. The camera is currently supported for Zoom, Skype, Microsoft Teams, Google Meet, Cisco WebEX, and Facebook Messenger.

The Ricoh WG-7 is available in black or red for 49,800 yen, or approximately $450, from Ricoh Japan. It does not appear as though the camera will be available outside of Japan at the time of publication, but it may come to international markets at a later date.

Equipment, News
crushproof, dustproof, pointandshoot, ricoh, ruggedcamera, splashproof, waterproof, Webcam
Related Articles
Discussion
Trending Articles
Mars Curiosity Rover Snaps Photo of ‘Doorway’ on Mars
May 16, 2022
Crocodile Dad Gives Over 100 Babies a Ride on His Back
May 15, 2022
Navy Fighter Jet Seen with ‘Shockwave Lines’ as It Nears Speed of Sound
May 16, 2022
The Science Behind Why Watches are Set to 10:10 in Advertising Photos
May 17, 2022
Astronaut Captures Lunar Eclipse from the International Space Station
May 17, 2022