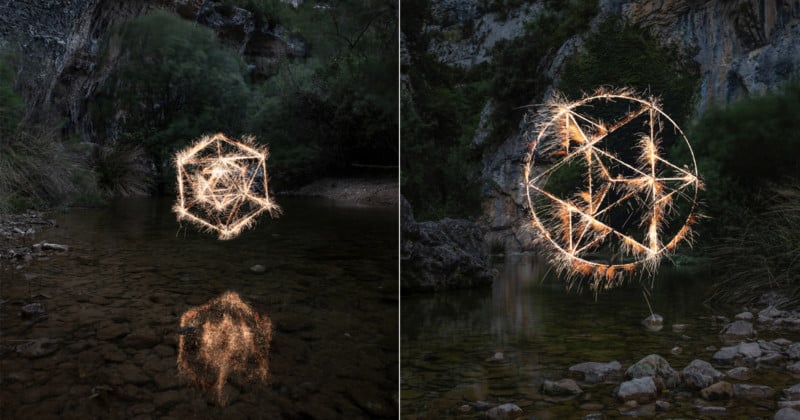 As a photographer, when you produce a series of photos that goes viral and you close sales and license deals because of it, it is tempting to simply continue doing the same and hopefully keep receiving the attention you had in the first place.

But you know that has an expiration date, and the sooner you reinvent yourself, the better. In late 2015, after “going viral” with my work Impermanent Sculptures, which I continued to develop quite actively through 2016, I thought it was time to move on to the next level.

In late 2016 I produced a new body of work applying similar techniques of long exposure but instead of “painting” with fire sparkles, I changed to water. To make the water trails colored, I had an assistant change color filters in front of two continuous light sources during 12 seconds exposures and also fired a strobe once or twice during that period (see minute 1:25 of the video below).

This series is called Maya Rainbow, and I was pretty happy with the result, even though it didn’t go viral, but it was also harder to produce, and involved assistants, a backdrop, continuous lights, models, and a proper place outdoors that offered electricity and running water. 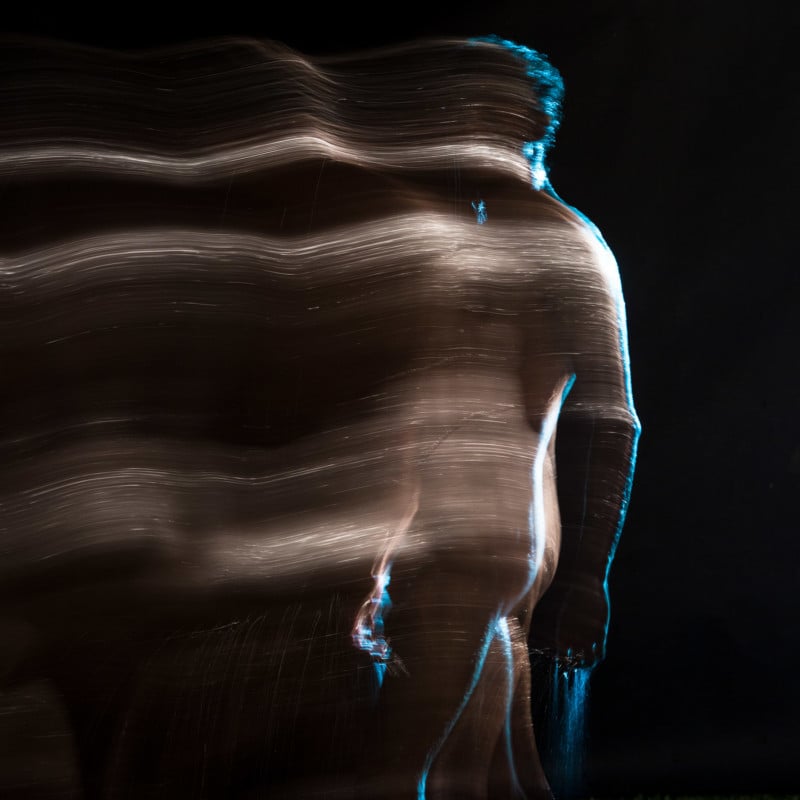 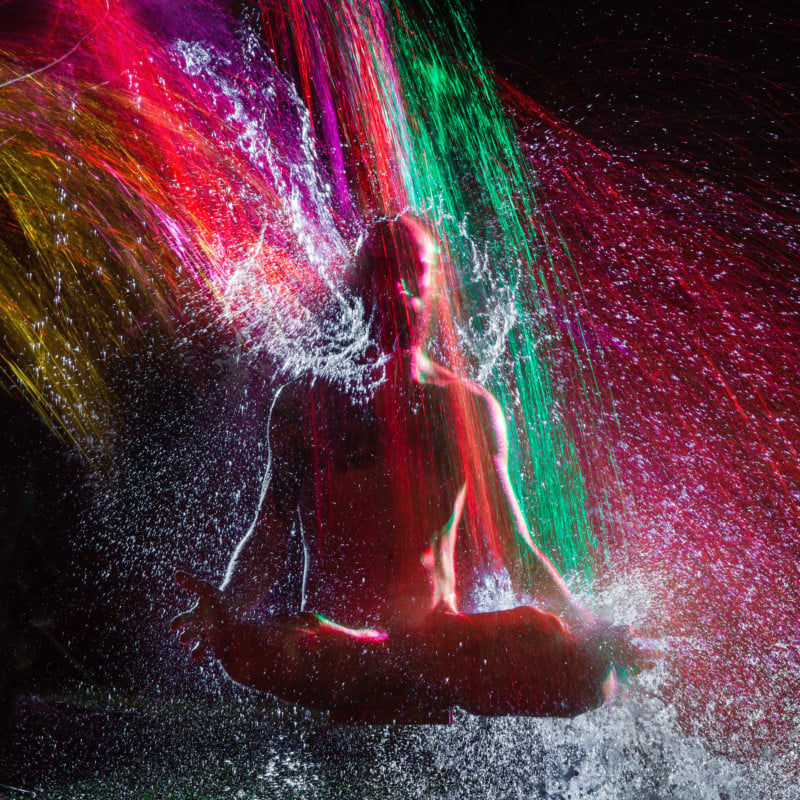 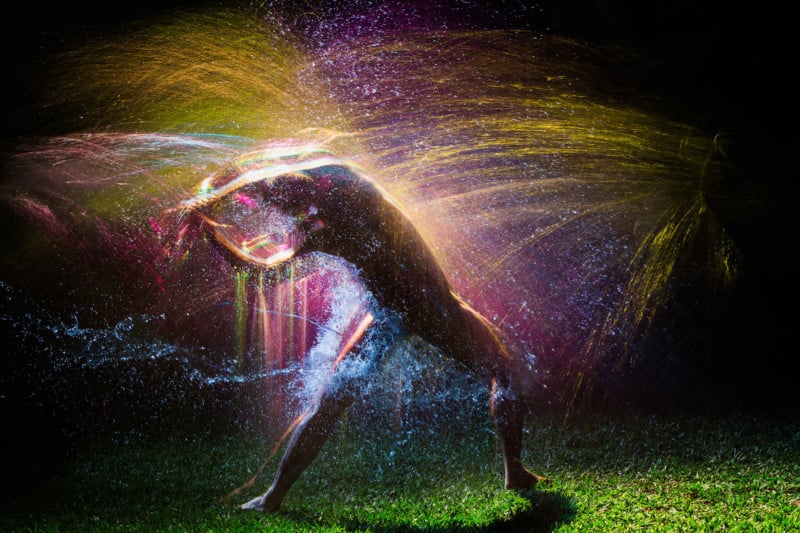 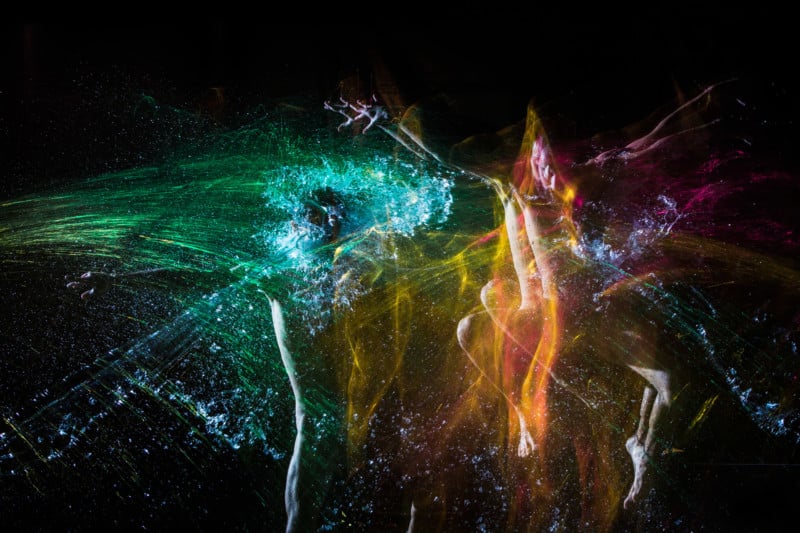 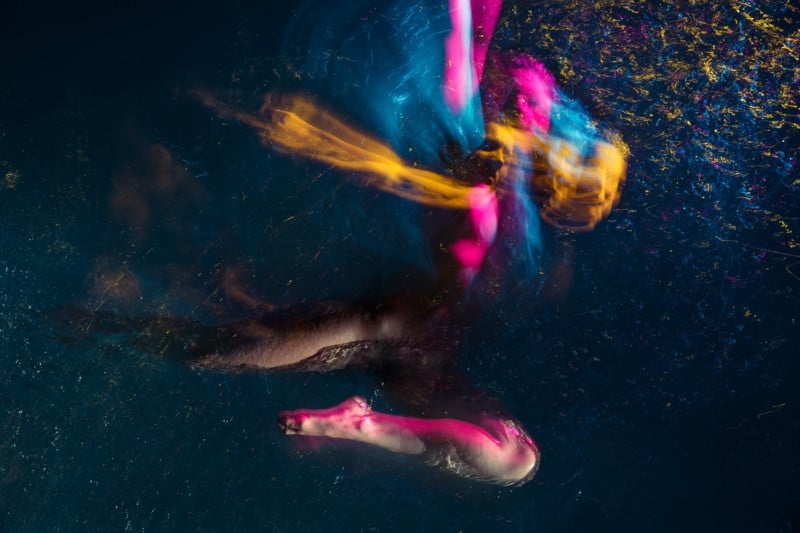 In the following year — 2017 — I moved from Brasilia, Brazil, to Barcelona, Spain, and here Maya Rainbow would have to be put on pause. I believed it was time to go back to further develop Impermanent Sculptures in a new environment, but I soon found out that the “fire sparklers” I could easily buy in Brazil’s firework stores are not available in Spain, as here the regulations for that kind of firework are more strict. The closest I could get was the kind that you mount on a birthday cake.

I then understood better the many people who had contacted me asking what kind of sparklers I used and how apparently they couldn’t find similar ones in their countries. Now I was going through that limitation too, and since importing fireworks across the Atlantic Ocean didn’t really seem like a good option both legally and financially, I had to work with what I had.

The birthday-cake sparklers that I found in Spain (and which I believe are available in any country) create sparkles that are much shorter in size and duration, so rather than creating the cascade effect from before, they will highlight the movement of the sparkler source across space and concentrate the viewer’s attention there.

I got the idea to deal with that light source as if it were light in a spray can, and as if it would imprint patterns in mid-air if filtered through a stencil plate. Since the whole concept of the project discusses the idea of invisible energies and I was familiar with the concept of sacred geometry, I vectored 2D geometrical shapes using Adobe Illustrator and had wooden boards cut by lasers to create these stencils that emulate a three-dimensional shape.

I produced different sizes of plates in different wood densities (lighter was easier to carry around but also more fragile and heavier were, well, the opposite, so there is a sweet point in between) and also tried different sized gaps for the outlines of the drawing and had them all painted black (using an actual black paint spray can). 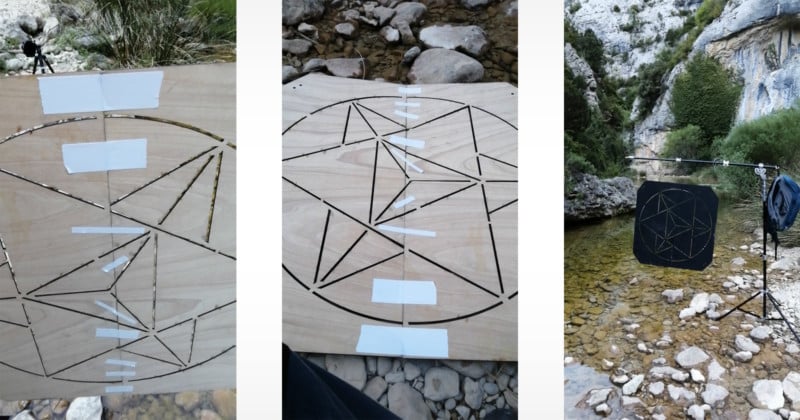 For it to work well, the plate has to be still while I ran the sparkler behind the gaps. I found that mounting it on an extension arm held by a sturdy tripod was the ideal scenario, which I managed to carry and mount in a couple of exterior locations (which not easy).

In some situations, to avoid the wind tossing the plate around during the exposure, I secured it with rocks attached to a string on the bottom part of the plates. The result you can see on the two latest additions to the series, Sacred Geometry in the Valley #1 and #2 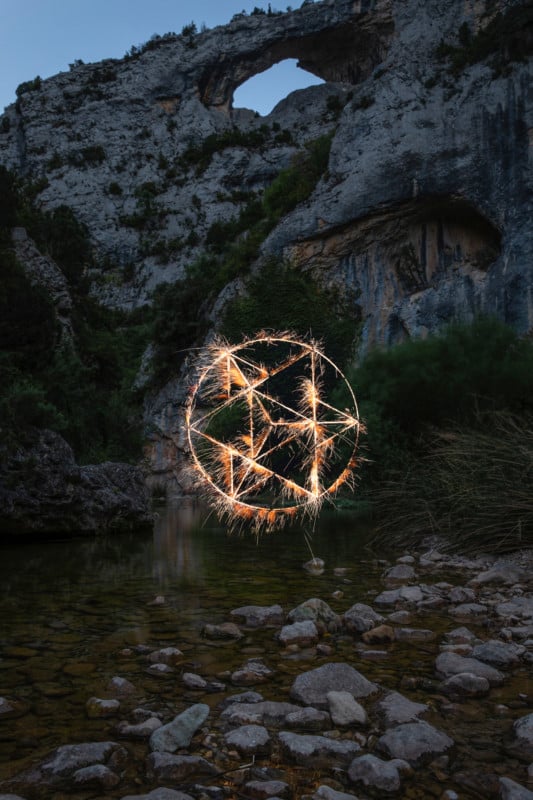 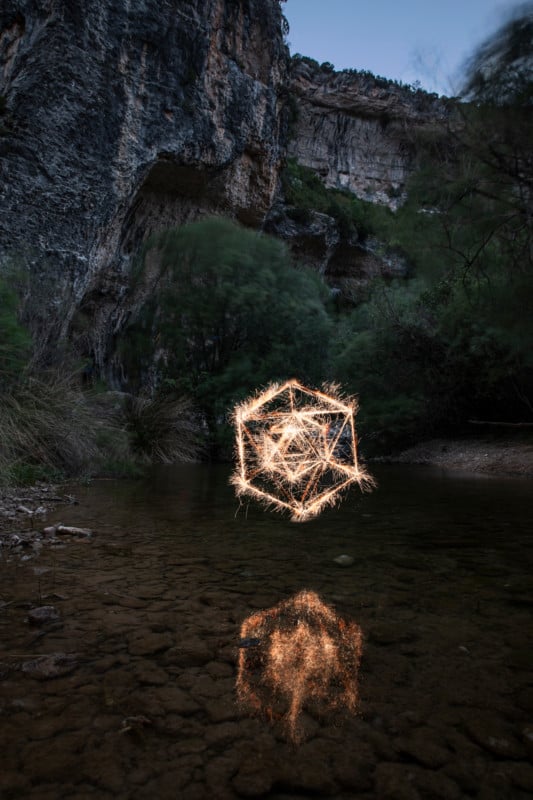 Another possibility is to hold the plate with one hand while drawing with the sparklers with the other. Although the result will be much less precise, I was positively surprised with how close it came to the picture I produced in Ibiza in 2019. 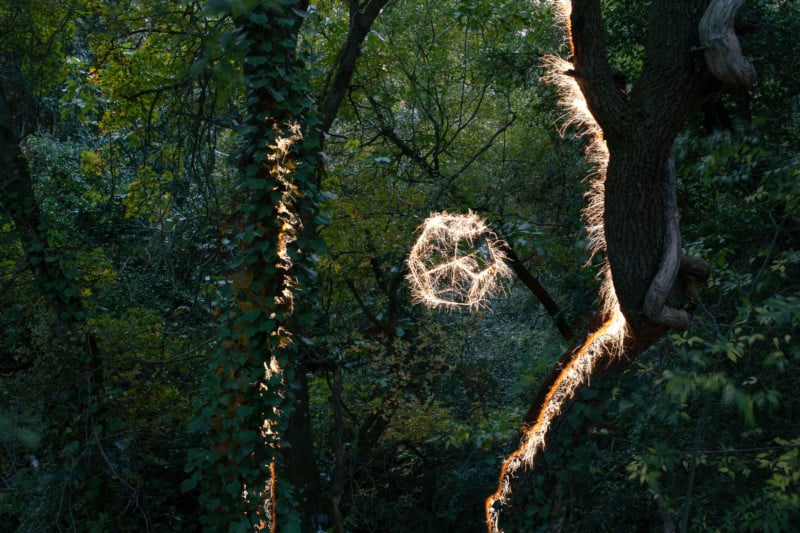 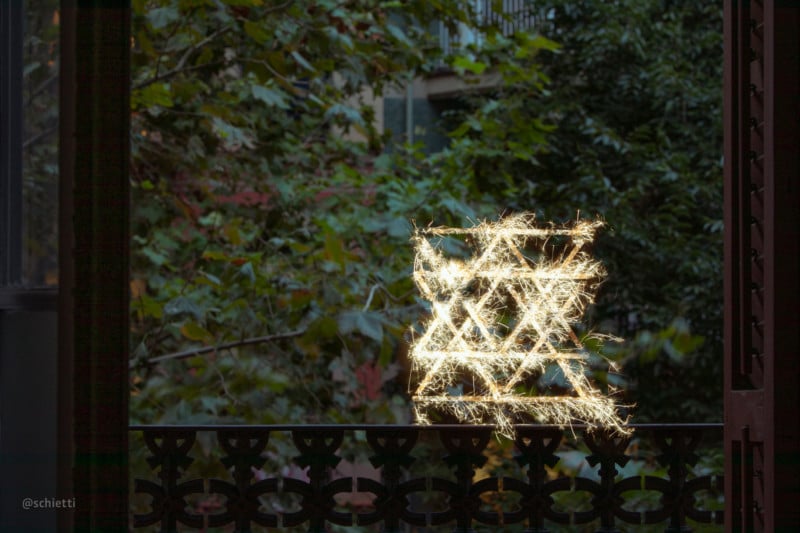 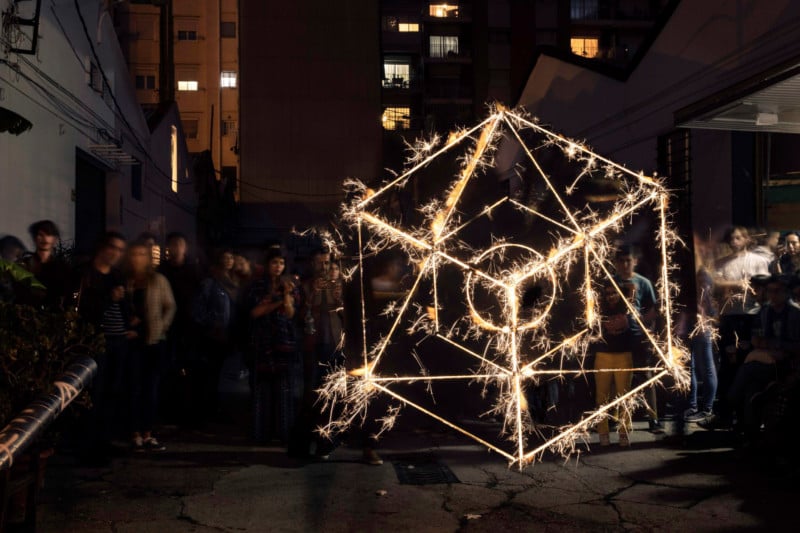 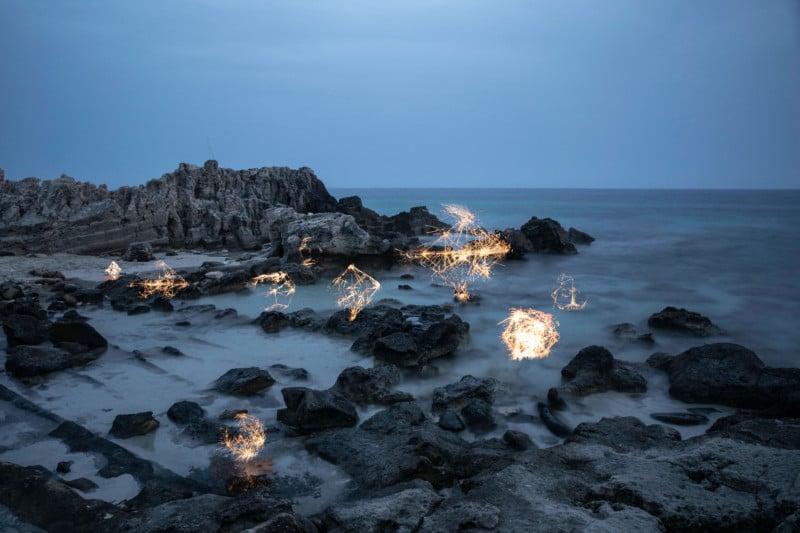 I still have a couple of plates that haven’t been successfully used (that is to say, there are images that I’m not happy with and didn’t make the selection for the series), so more of it may come soon.

This year I visited Brasília, my home city and where it all started, and it felt good to have the long sparklers available again. I couldn’t avoid doing more Impermanent Sculptures in trees as I had done five years ago: 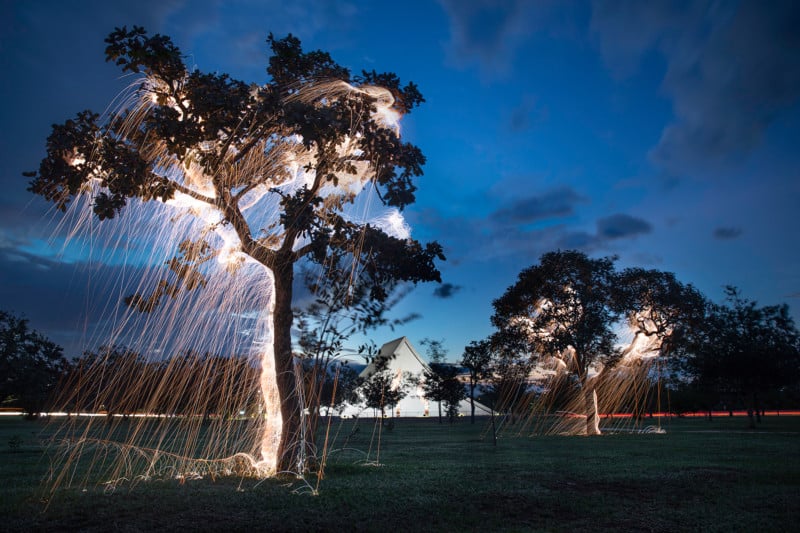 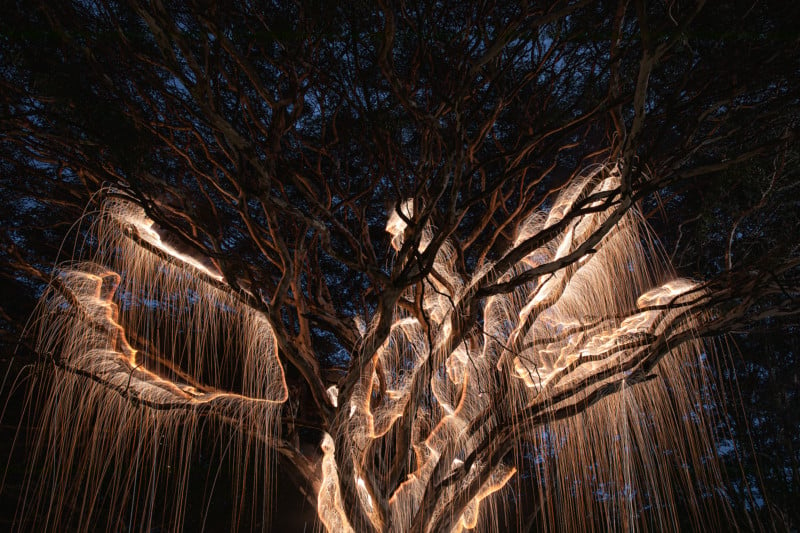 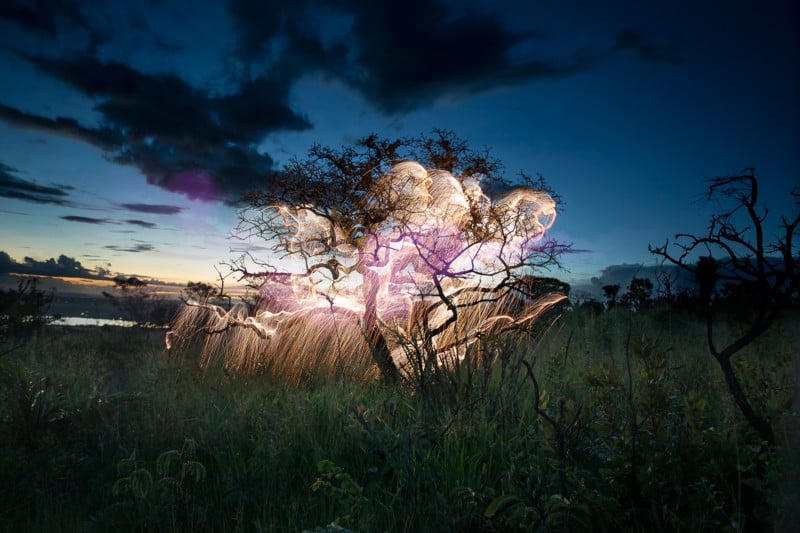 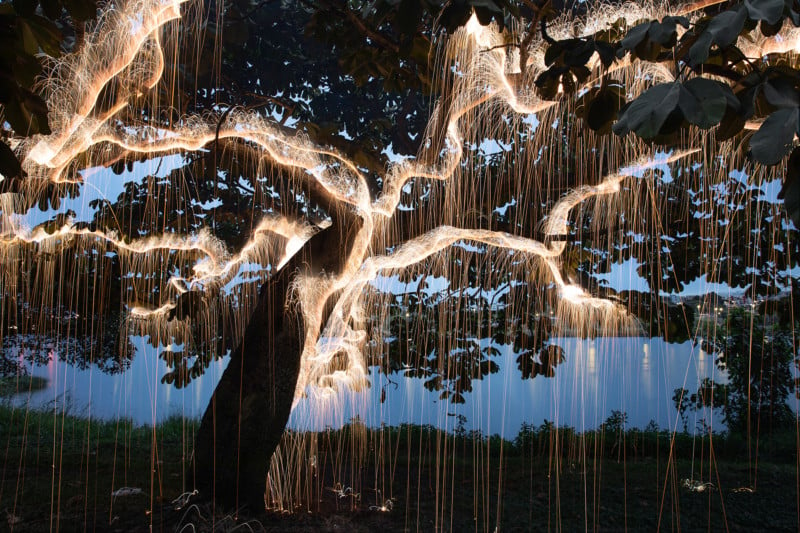 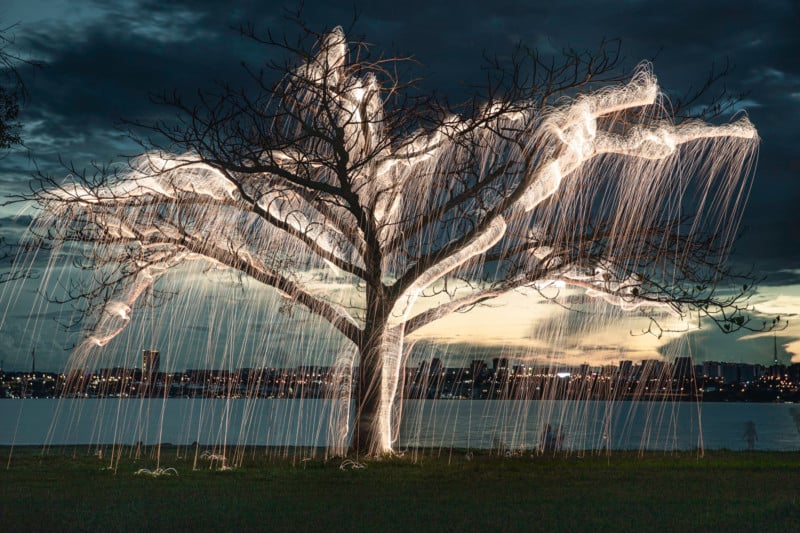 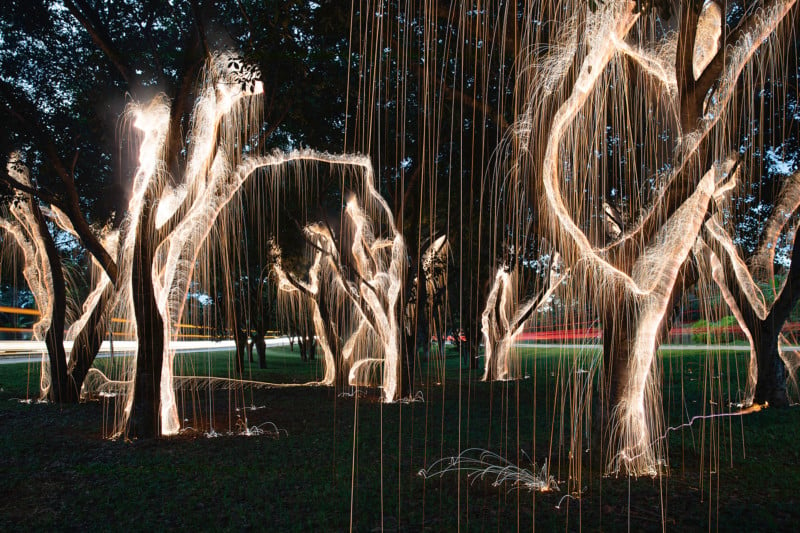 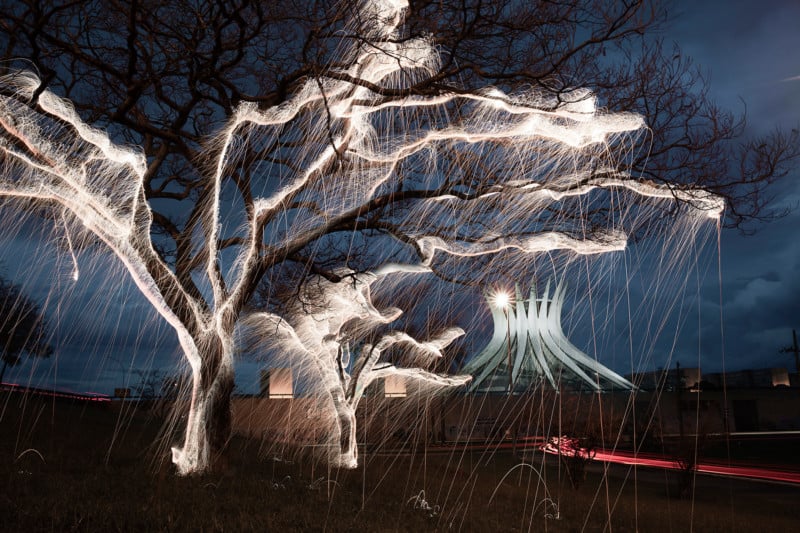 I also experimented with colored smoke, which turned out good in the image “Soft and Vivid Lucid Dream” but not in a couple of others that I tried. The making of video from this latest season can be watched below.

You can also look at the entire series as well as my other works on my website here.

Editor’s note: As mentioned in the past, working with fireworks and sparklers in photography is highly dangerous for both the environment and for the photographer. Schietti exercises a high amount of caution when creating his work.

About the author: Schietti’s work is dedicated to the visual representations of dreams and memories as building blocks of one’s identity. His motifs go from landscape to portrait, often applying long exposure and light-painting techniques. Schietti has a Bachelor’s degree in Social Communication from the University of Brasilia (2004-2009) and studied cinema in NYFA in Los Angeles (2010). In 2011 he founded Schietti Fotografia, a photographic studio specializing in advertising and art photography. He moved to Barcelona in 2017, where he was the manager of Espronceda Institute of Art Culture until late 2020. He’s passionate about rock climbing, human connections, and the vegan cause.