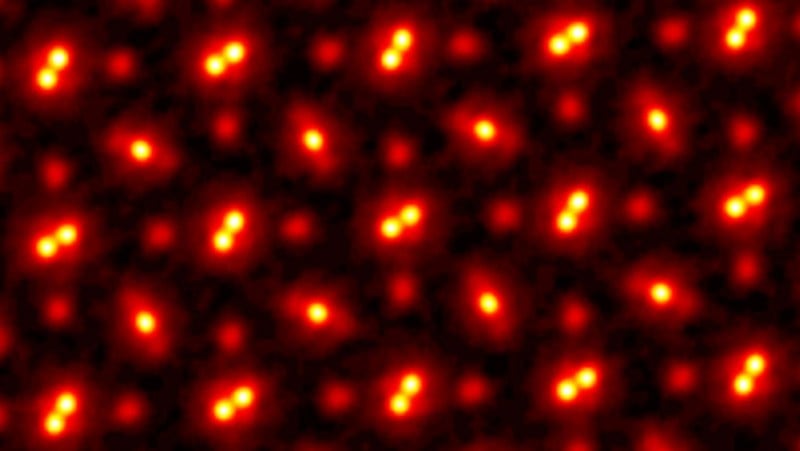 In 2018, Cornell researchers built a high-powered detector that set a world record for the highest resolution state of the art electron microscope which, at the time, tripled the previous resolution it could capture. Now, they’ve beaten their own record by a factor of two.

Cornell University’s David Nutt writes that as successful as the first approach led by David Muller — the Samuel B. Eckert Professor of Engineering — in 2018 was, it was flawed. It only worked with “ultrathin samples that were a few atoms thick.” Any thicker, and the electrons would scatter in ways that could not be disentangled.

However, on March 20, 2021, Muller again led a team that has beaten its own record with what is described as an electron microscope pixel array detector (EMPAD) that has an even more sophisticated 3D reconstruction algorithms and whose resolution is so finely tuned that the blurring visible in the finished image is due only to the motion of the atoms themselves.

The resulting photo (above) depicts an electron ptychographic reconstruction of a praseodymium orthoscandate (PrScO3) crystal, zoomed in 100 million times. The results of this experiment have been published in a full report here.

“This doesn’t just set a new record,” Muller says. “It’s reached a regime which is effectively going to be an ultimate limit for resolution. We basically can now figure out where the atoms are in a very easy way. This opens up a whole lot of new measurement possibilities of things we’ve wanted to do for a very long time. It also solves a long-standing problem — undoing the multiple scattering of the beam in the sample, which Hans Bethe laid out in 1928 — that has blocked us from doing this in the past.”

The microscope captures images using a computational method of microscopic imaging called Ptychography. It generates images by processing multiple coherent interference patterns that have been scattered from a particular object and looks for changes in the overlapping regions. By seeing how the pattern changes, the researchers were able to compute the shape of the object that caused the pattern.

“With these new algorithms, we’re now able to correct for all the blurring of our microscope to the point that the largest blurring factor we have left is the fact that the atoms themselves are wobbling, because that’s what happens to atoms at finite temperature,” Muller continues. “When we talk about temperature, what we’re actually measuring is the average speed of how much the atoms are jiggling.”

It is possible that the researchers could again beat their own world record by using material that is made up of heavier atoms, as they wobble less, or by cooling down the sample which also reduces the movement of atoms. It is theorized that atoms stop moving at absolute zero, but it has yet been impossible to reach that temperature. As a result, any lowered temperature that the researchers could reach may not reduce the movement of the atoms by a noticeable amount.

“We want to apply this to everything we do,” Muller says. “Until now, we’ve all been wearing really bad glasses. And now we actually have a really good pair. Why wouldn’t you want to take off the old glasses, put on the new ones, and use them all the time?”

ACLU Challenges Ruling Where Woman Was Arrested for Filming Police