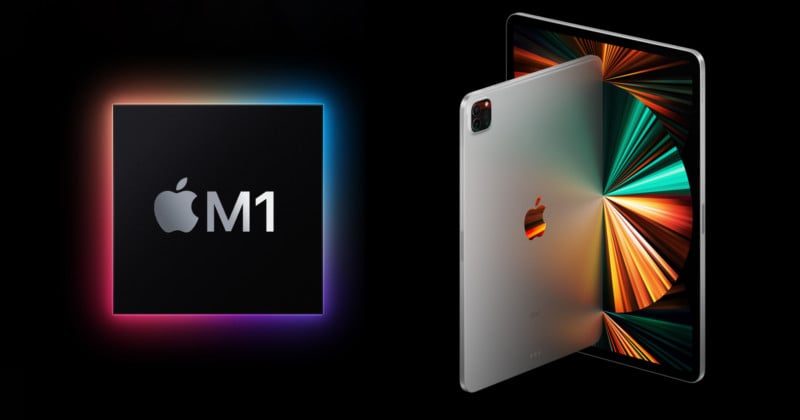 When Apple announced that it would be adding its M1 computer chip into the iPad Pro, the idea of what the iPad is or could be immediately changed. Apple doesn’t appear to want to add its macOS to the tablet, but developers are still excited about what it means for the future of the device.

As part of its M1 on iPad Pro announcement, Apple promoted its efforts by featuring a host of prominent developers. One of those was LumaTouch, a software company founded in 2013 by Chris Demiris and Terri Morgan and whose most well-known product is the video editing platform LumaFusion. Even on older iPads, LumaFusion provides an impressive number of features and is designed specifically for the touch-based interface of the iPad.

Does Apple’s inclusion of M1 in its latest tablet mean that macOS and iOS are about to become one? The answer isn’t simple.

“Apple has been heading in this direction for a while by using the best possible chipsets in both platforms,” Demiris said to PetaPixel. The touch interface of the iPad versus the desktop are two totally different worlds even though they’re slowly becoming equal in power. Apple is doing some work to make them feel compatible.”

Demiris and Morgan believe that the expectations of the two operating systems becoming one should be tempered, at least for now.

“I would find it very unlikely that Apple would just dump something on a platform just because they can,” Demiris says. “I can almost guarantee that we won’t see that anytime soon. Will Apple slowly bring the two in more conjunction with one another? I’m sure. They’re already doing it with Big Sur and little by little, they’re doing that.”

Demeris adds that the first iterations of Catalyst apps — a first step in moving the two platforms together — weren’t very good.

“They felt like shoehorned iPad apps,” he says. “I think they’ve learned from that and so have we that in order to bring things across you have to do a redesign. Putting a desktop app onto a platform that is touch you have to get it to feel right.”

Morgan says this is probably why Apple hasn’t released a version of Final Cut for the iPad. From their perspective, LumaTouch agrees that just porting over software that was designed for a touch interface onto a desktop — and vice versa — just isn’t a great user experience.

“When you design for touch, you get a different process where you get different results than on desktop,” Morgan says. “If you try and just port software, it won’t have the right experience. If we do a desktop version, we would have to go and redesign everything for that platform. It’s about the interaction, and you can’t replace one thing with another.”

Both Demiris and Morgan believe that the reason Apple has not added touch functionality to its desktop or laptop computers the way Microsoft has with its Surface products and support through Windows is that the way such an interface is implemented is important.

“Right now I have an iPhone, an iPad, and a desktop computer and I use all of them for different workflows. If I was a company making software for each. would I merge them? No way. I want things that work perfectly for the situation of my user,” Morgan says.

Morgan says that this idea of a “perfect experience” may be lost on Apple’s competitors, or at least not as heavily emphasized. When the touch functionality was made available on Windows, Morgan admits she initially considered what that might mean for LumaTouch. 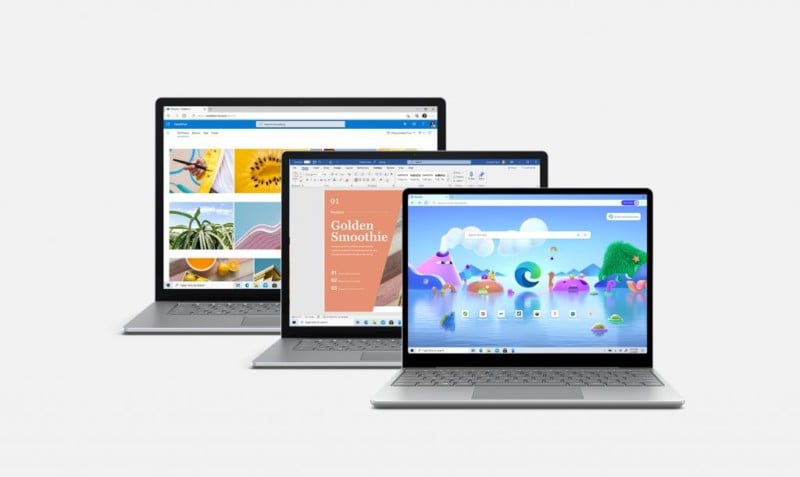 “I feel like what you see when you open a Surface is indicative of this: The touches aren’t quite right,” she says. “I thought to myself would LumaFusion work on that? I said no, it just doesn’t have the right feel.”

So while Microsoft’s marketing has been quick to jump on Apple for being “behind” or somehow “lesser” for not implementing touch, Demeris and Morgan at least understand Apple’s mentality.

LumaTouch argues that just because a company can enable touch functionality does not mean it should.

“What’s the motivation to do that?” Morgan posed. “Right now, I have an iPhone, an iPad, a desktop, and I use all of them for different workflows. If I was a company [making these devices] would I merge them? No way. I want things that work perfectly for the situation of my user.”

At present, companies like Adobe have openly embraced both the Windows touch experience as well as expanded its iOS app functionality for iPad. As far as a Windows experience goes, however, the company really only treats touch as an extension of mouse and keyboard rather than spending time rethinking how a touch user would engage with the app. Both Morgan and Demeris seem to think this is the wrong way to approach software design for creative users, and while both stopped short of specifically speaking to what Adobe is doing, their line of thinking is clearly divergent.

LumaTouch may have a point. When Adobe announced Photoshop for iPad, initial reception was poor: it simply did not do enough. Early reviews were terrible and most agreed that Adobe should have waited to release the app when it was more complete.

Adobe declined to speak with PetaPixel on this topic.

While Apple is staying the course of keeping its operating systems and applications separate for now, Demeris says that bridging the remaining gaps between iOS and macOS — namely touch — isn’t off the table for Apple.

“Somewhere down the road, I wouldn’t be surprised to see it,” he says. “But I don’t think it will be as soon as people think it is. Apple only does something when they think it’s ready, and I think that speaks to how Apple does things: when it is absolutely right.”

On their end, the LumaTouch co-founders approached the development of LumaFusion from the same angle, and explain why the application is only available on iOS.

“What we have created in LumaFusion feels so different than editing on a desktop,” Demeris explains. “It’s more than the power of the platform, and we’ve taken a step back so it’s not so much about the hardware and more about easier to use. The iPad enabled that. Because we had to start on a platform that did not have a keyboard and mouse and was purely touch, so we had to simplify it to something everyone could use. Now with a keyboard. Touchpad, and more power that have come over time we have been able to add more features that are desktop-like. But we wanted to make something different than what is available on desktop.”

But now that LumaTouch will have access to so much more power because of the M1, what it can do dramatically expands. Recent reports indicate that the iPad Pro with M1 is up to 56% faster than the previous iPad Pro.

Both Morgan and Demeris expressed excitement about what it means for their company’s future. While LumaTouch was focused on making its iOS application as great as it could be, by introducing the M1 into that equation, Apple is allowing its developers to branch out beyond those comfortable walls.

“We are looking actively at what would a desktop version of LumaFusion look like,” Demeris says. “We want to bring the right experience across and that will take time to get right. We think we have more in LumaFusion than just touch, but touch is a big part of it. Making it feel as fun and personal on desktop as it does on iPad is important.” 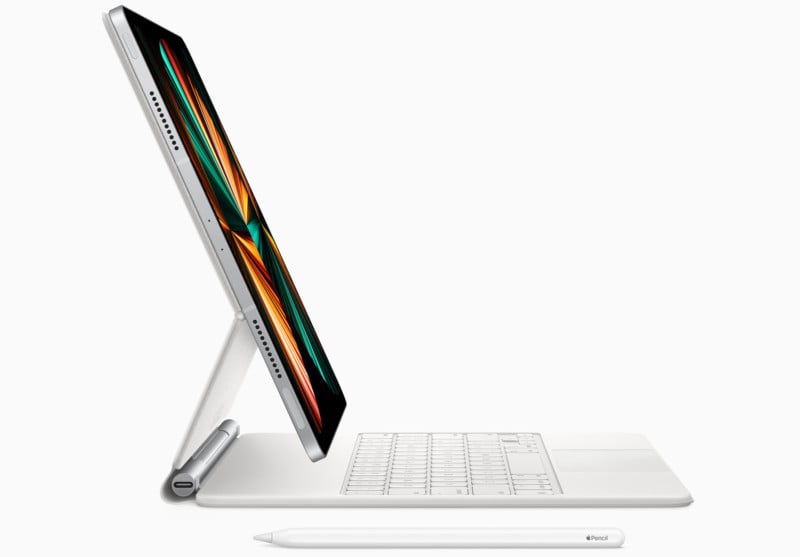 Morgan agreed and reaffirmed her belief that if she and LumaTouch do something, the key is to do it right.

Demeris says that its work specifically with Apple is both because of the popularity of the company’s products, but also because of Apple’s support. Because of that, LumaFusion’s app will continue to work great even when the iPad is powered by a wholly new processor.

“LumaFusion is built on an all Apple interface, and because of that, we get an immense amount of their optimization for free. Their team specializes and optimizes for the new chip and we get that magically,” he explains. Now we build on top of that, and so we can make a great editing app and not optimize for a particular chip that is coming out. But we don’t have to do anything particularly special for the new chip, which is actually one of the best advantages we have.”

When asked about how LumaTouch will grow its apps on iPad thanks to M1, Demeris says he and his team are excited to bring new features and functionality to the application.

“Probably one of the biggest ones is the new Thunderbolt port because you can edit live off an external drive. This really enables those kinds of workflows more than before,” he says.

Still, Demeris says that the M1 chip is only speeding up what was already in place.

“We’re looking at technologies that we can leverage now that the power is there, but all of it could be done just a little more slowly on existing devices,” he says.