Photography is the art of telling stories with light. Millions of photographs evoke emotions and photographs have dramatically changed history, but there is something dishonest about photography. Something that begs the question: Is this a lie?

Over the years, photography has become synonymous with truth. In court, photographic evidence is deemed very strong. Rarely do people doubt the reality of an image. Sadly, some of the world’s most famous photographs have a dark side to them. Some were staged, while others are a misrepresentation of the events.

Fashion photographers are guilty of this too. Retouching takes some photos too far, while others praise it for the versatility it offers. But does Photoshop create false beauty standards in the eyes of the audience?

Where is the difference between lies and creative storytelling? Are all photos that have ever been made lies?

Let’s go back to the start of photography. The simplest methods available to photographers at that time were framing and subject direction. For the sake of the example, we will exclude camera settings, light direction, etc. The first photograph ever was a cityscape/landscape photo, and it was framed and shot. In that framing, some parts are excluded and others are included. That is interesting from the sense of composition. Was the choice to have leading lines deliberate? I like to think yes.

Is Composing a Lie?

I think no. While that’s just my personal opinion, there must be a certain level of rationalism to this. By composing a photo, painting, or anything else, the artist makes active choices on what is in and what is out. There is no easy way out of this. Picking angle, focal length, and other parameters is just how photography works at the moment. It’s a 2-dimensional representation of a scene.

Movie sets are not built to be real, but to represent reality in the frame. In a way, that renders the things outside of the frame useless, but so be it.

There are instances where composition can be a lie. One example would be in documentary photographs. Civil unrest and protest coverage are very good in showing that. Certain newspapers crop images in one way or another to convey a message that resonates better with the readership.

Here’s how two different UK newspapers covered the toppling of the Colston statue. The two are on opposite ends of the political spectrum, which is quite interesting as the crops of the seemingly same photograph are different. One shows more of the crowd, while the other is centered on the statue. The editors are not leaving out an element per se, but they are guiding the readers to view things a certain way by cropping the image differently. 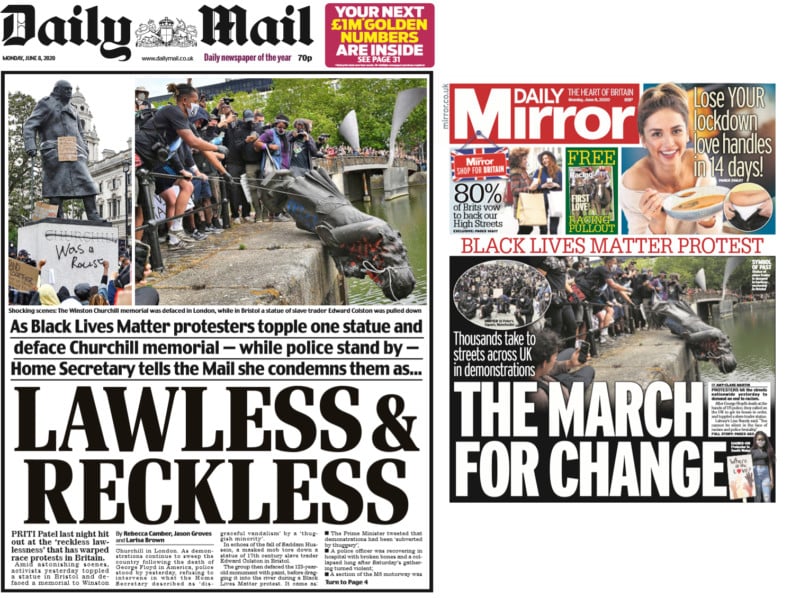 Humans lie: as sad as it sounds, it’s true. Photographers are no exception, with the most famous example being one of the most celebrated war photographs ever taken. You’d ask, how can the community hail this photo as a documentary photo if it’s telling a lie? Isn’t documentary about truth? You’d be right to question other work Robert Capa produced. I do too.

The story behind “Falling Solider”, the photograph in question, is hazy, but it’s agreed upon nowadays that the photograph was staged, meaning Capa lied to the world. Phaidon, one of the most respectable book publishers, published the image claiming what Capa said. Is Phaidon to blame for it? No, Capa is.

Staging scenes goes against what people believe photography is: a method of capturing the truth.

Stalin and Photoshop in the 1930s

Photography is a powerful tool in propaganda, and it’s often regarded as the whole truth and not questioned. Stalin was a soviet dictator whose regime killed more than 20 million people (a figure that’s disputed), and the part of his chapter in history that interested me as a photographer is how photographs of him were manipulated to look real in order to portray Stalin as someone better. “Documentary” photographs were in fact careful propaganda manipulations.

Here’s an example of someone who was deemed unfriendly to the regime disappearing from the image:

As a side-note, the other people left in the photo got a 1930s makeover and airbrushing. Who doesn’t like asking good retouchers for a favor?

I mentioned Photoshopped photos. This is where I would like to talk about fashion photography.

While this sounds like a rabbit hole that doesn’t have a bottom, I’ve come to the conclusion that fashion photography is about clothes and how models interpret the clothes. Retouching is a way to enhance the image, not to make the image.

In the past, Photoshop was less intelligent and it had fewer tools available. Most campaigns from the early 2000s will look cheesy if not unrealistic. However, that is changing. Frequency separation is no longer the go-to technique for retouchers. Having an alien face on your models probably makes your work look cheap and amateur. What is popular now is light and natural-looking retouching. Natural retouching is more to do with keeping faces “real.” The 90s heroin-chic era is gone, as is the 2000s airbrushed face. “Keep it real” is the motto.

Retouching Is a Creative Tool, Yet Not Always

Someone can argue that retouching is a lie photographers can tell when they are lazy to get it right in camera. I know for a fact there are haters of Photoshop who think photography died when people stopped using large format view cameras for everything. I disagree with that.

Photoshop is a creative tool that, if used properly, enables artists to take their work further and bring out more in their work. Misuses of Photoshop creates lies in photography, while correct uses creates art. Which one is which? That’s for you to decide and argue either way.

So, what are photographic lies? Well, there is no clear answer, but I’ve come to think that if a photographer knowingly lies in their image to make it more visually appealing in a situation that does not permit such manipulations, that photographer is a liar. A photographer that acknowledges that manipulation was done and is clear about it is not a liar. An image is only a lie when it was intentionally created to be one, not because the concept of photography is a lie.

About the author: Illya Ovchar is a fashion photographer based in Budapest, Hungary. The opinions expressed in this article are solely those of the author. You can find more of Ovchar’s work on his website.

A Most Unscientific Personality Study of Photographers