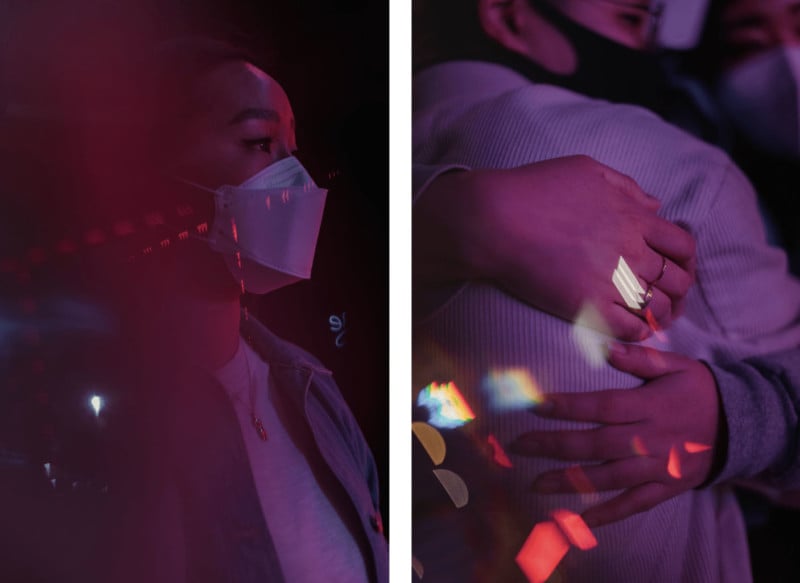 While overall hate crime dipped in 2020, hate crime against Asians increased dramatically in a number of cities around the country. That trend has unfortunately continued into the early parts of 2021, most visibly manifesting itself with the killing of 8 people (six of whom were Asian) in Atlanta on March 16, 2021.

As the 24/7 cable news coverage receded, the Washington Post assigned Philadelphia-based freelance photographer Hannah Yoon to cover the aftermath with a more nuanced take on the lives of Asians and Asian-Americans in the local community. Her photos stopped me in my tracks because they looked and felt so different from other images I had seen.

I reached out to her via email to inquire about the assignment and her process. 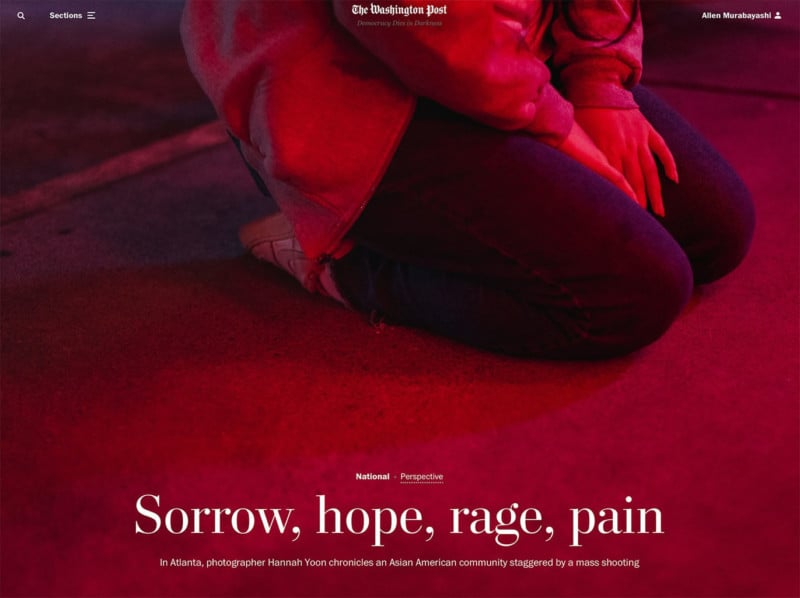 Allen Murabayashi: How did WaPo come to hire you for this story in Atlanta? Did you work with writer Jada Yuan?

Hannah Yoon: The day after the Atlanta shooting, I shared a personal post on my Instagram. The images were a bit different from what I normally share, but I wanted to share it because I like to use photos as a way to connect with others. Karly Domb Sadof at the Washington Post saw them and asked if I’d be willing to go to Atlanta to cover the story on the community in a similar fashion – using what we, as Asian Americans, were feeling during that time. I only connected with Jada after I had finished photographing.

You spent four days and five nights covering the aftermath of the murders – a long assignment in many regards. How did the duration of the assignment affect your approach?

It was a long time to spend on this but it was just the right amount of time. I arrived late on Friday and finished photographing by Monday evening. I spent Tuesday working on putting photos together and speaking with Jada. I was able to take things a lot slower than if I had one or two days to work on this. Karly made sure I had enough time to focus on going to where I needed. She also allowed me to decide where I was going to go, who I’d meet up with and what I wanted to share.

I was really struck by the opening images in the package. The neon lights, window reflections, and the lead image of the woman in a kneeled position so effectively communicated the scene and the “Asian-ness” for lack of a better term. What was it like to be on-scene?

The first night I arrived, it was quiet other than this big TV crew. The flower memorial was already growing. It felt serene and a bit surreal to be there. Serene might be a strange word, but it had that feeling despite the chaos and terror that had occurred just a few days earlier. It was also eerie because the lights were still operating, but the operations were closed. I think I was in work mode when I first arrived, so I wanted to moreso to feel out the place. I thought a lot about the women who died and who they were. At that point we only knew a little bit of their stories.

The WaPo article mentions that only one other news crew was there when you arrived. Did you have concerns about making good photos when the event was “over” from the news cycle perspective?

I should clarify that when I arrived there was only one news crew at Gold Spa, but there were still other news publications in Atlanta covering stories. But it was interesting to see who was still left around late at night.

I think I had a bit of a concern of not making the same images that I was seeing. I also wanted to make sure I was portraying a feeling more than what was happening. Though I covered the Atlanta rally on the Saturday, I was trying to focus on the overall sentiment of what the community was experiencing.

There’s been a tremendous amount of discussion in the photojournalism/documentary world about identity and who should photograph what. I was really struck by your comment about reading the notes written in hangul [Korean characters], and how it made the story more personal to you. Can you share your thoughts about being ethnically Korean covering a story disproportionately about Korean-Americans?

In some ways, it felt like a huge responsibility. It wasn’t meant to be just about the Korean community, however, four of the women that were killed were Korean. Seeing the Korean language, Korean churches, Korean community show up made it feel a lot more personal. I think if you’ve been thinking about issues regarding the Asian identity then this event would have sparked some type of big emotion.

When a friend and I were visiting some of the Korean and other Asian-owned businesses along Buford Hwy, there was a suspicion and fear among most of them. Even when we spoke Korean to some, a lot of folks were reserved. But there was one moment, where I walked into a Korean pharmacy and asked in Korean if we could photograph the space. They seemed reluctant to talk to us and kept glaring at us. I asked if I could photograph little figurines I saw at the front of the pharmacy, and one of the techs said it was OK. While I was photographing, I saw some vitamin packages that had BTS on them. I asked the pharmacy tech about the vitamins, and then we started casually talking in Korean about BTS. She broke down a little box for me that had a picture of the band on it, and gave it to me. Then she started to open up about how she felt about the shootings. We didn’t have to ask for a formal interview or convince her to talk. I can’t imagine someone that wasn’t Korean getting her to talk to them. The ability to speak a bit of Korean and share our mutual interest in something allowed her to open up.

I found myself having long and deep conversations with folks, especially within the Korean community, and I think it was possible because I myself was Korean. I also think folks were so open to taking me around, meeting with me, because I was Korean.

There are very few faces in the final edit. Hands and silhouettes play a large role. Was this intentional while you were taking photos, or was this an editing decision? Is this a visual commentary on the “invisibility” of Asian-Americans?

All of this was intentional. On one hand, yes it was a commentary about the “invisibility” of Asian American and how, for so long, what many have been going through has been either undocumented OR dismissed. I also didn’t want one or two people’s stories or experiences to represent a whole community. Though I was there in Atlanta, covering the community, I wanted this body of work to also reach the wider community across the country. My goal was to translate what some of us were feeling into photographs and hopefully stir up feelings in others. I wanted as many people to connect with the photos.

Maintaining neutrality and reporting dispassionately on an issue is the textbook approach to journalism. When I recently interviewed Rick Smolan, he told me that “photographers should use their skills to not dispassionately document…If they can help expose a situation…shock people, move people, get people to change the way they perceive something – they should do that.” You expressed strong emotions around covering this story. I’m not sure this is even the right question, but did you feel like the end product was “neutral”? Does neutrality even matter?

I don’t think I was going in as a neutral person. When I was hired, I was told “We want to see how Hannah would see all of this” so essentially, it was important that I was part of the process. I was bringing my feelings, my thoughts, my questions to every situation. I had no intention to be neutral. I was open, of course, to listening to what folks had to say and there was quite a wide range of emotions and responses to the shootings. Not everyone was angry or sad. Some even questioned whether the outrage was a bit too much. I think this is why I wanted the images to be subtle and soft. I don’t see them as angry or too sad. I feel like they are a bit more mysterious and ambiguous. I want tension. I also wanted the photos to challenge and have people ask questions. In some ways, I think that reflects some of what the Asian American community feels – a wide range of emotions that may sometimes be overlooked.

Hannah Yoon is a freelance photographer based in Philadelphia, Pennsylvania. Yoon is a member of Women Photograph and Diversify Photo and a founding board member of the Authority Collective. You can find her on her website, Twitter and Instagram.

The opinions expressed in this article are solely those of the interviewer and interviewee.

Image credits: All photos copyright © 2021 by Hannah Yoon and used with permission.