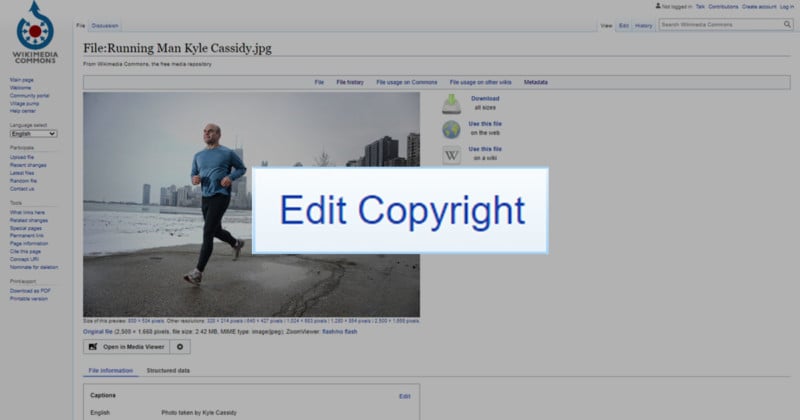 Heads up, photographers (and content publishers): scammers are apparently now changing the copyright ownership data on Wikipedia photographs in order to trick people who use the photos legally.

Photographer Kyle Cassidy took to Twitter yesterday to share how the scam works after being contacted by writer Eric San Juan about his photo. Eric had used a runner portrait that Kyle had shot back in January 2013 and shared on Wikipedia under a Creative Commons license.

I got an email from writer @ericsanjuan, he'd used my photo of @petersagal running in chicago on his blog. It's a lovely photo and you're free to use it…. https://t.co/X5fgzAd0Hs as long as you credit me ….

Eric was then contacted by someone going by the name “Aldwin Sturdivant” from Greencap Marketing, a business that provides “photographers with the tools to recover lost fees associated with unauthorized use of their work.”

A few days later, Eric gets an email from some dude with the improbably name of "Aldwin Sturdivant" who says "hey, you used my photo and didn't credit me…."

Eric shared a screenshot of the actual email he received in a blog post about this scam:

"Aldwin Sturdivant" says he is the content editor of some place called Green Cap Marketing (https://t.co/qLp2dAi8bF) which claims to track down photo thieves and make them pay royalties to photographers (nice idea)….

Eric believed he had properly credited the photographer according to the Creative Commons license, but upon double-checking on the Wikipedia page, he found that it had been updated to say that an “Aldwin Sturdivant” had captured it… with a point-and-shoot camera.

And Eric is like "oh heck! i thought i credited the photo properly!" so he goes back to wikipedia and he sees that "Aldwin Sturdivant" has actually edited the caption on the photo to say that he took it … ***with a Samsung WB35F point and shoot*** …

Kyle had actually captured the photo during an outdoor shoot using off-camera lighting.

Which is funny, because I took it with a Nikon d800, an off camera wireless strobe and two assistants….. pic.twitter.com/CywOhwRM2W

Upon further investigation, it seems that “Aldwin Sturdivant” had taken “ownership” credit for a large number of photos across Wikipedia.

I'm guessing https://t.co/PiCfd9Vav5 just rewrites wikipedia pages, claims authorship, and tries to sue people. So … if any of you are wikipedia editors and want to look into this … have at it and let me and @ericsanjuan and @petersagal know what comes of it.

This is sh!tty because it takes money from artists, & it takes money from people who are trying to do the right thing & credit artists. It's particularly disappointing because "Aldwin Sturdivant" hasn't bothered to take his own photos and contribute to society….

That caption was changed on November 23 by someone with the username Suzane.Rob2020 ; here are their other recent edits, looks like they've been busy:https://t.co/hkiVfoWBrh

In a follow-up email, “Aldwin Sturdivant” asked Eric to change his credit link to an affiliate link.

“So what originally looked like a copyright trolling scam, may be more of an SEO scam. Either way, it’s a scam,” TechDirt writes. “[O]thers have pointed out that this is a common problem, with people vandalizing photo credits […] Some Wikipedia editors have been reporting and banning users for engaging in this kind of scam.”

Our legal team is already looking into it!

If you’re a photographer who contributes photos to the Wikimedia Commons, you should make sure you always put your ownership information in the file’s metadata, and perhaps keep an eye on your contributions to make sure no one edited the pages to take credit for your work.

Thanks for sending in the tip, Albert!