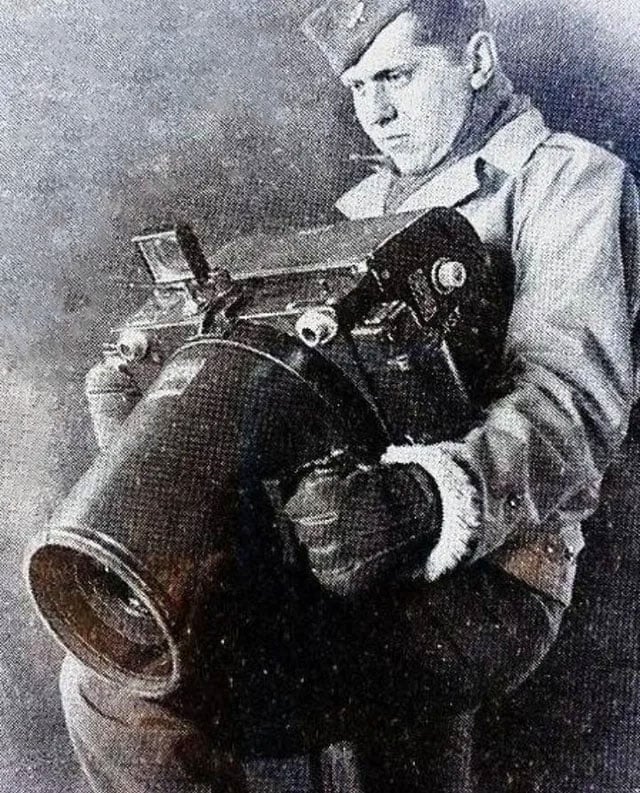 Check out this absolute unit of a camera that was used to do aerial photography during World War II. Mounted on the front of the camera is a massive 2-foot long 610mm f/6 lens.

This viral photo has made the rounds on the Web in recent years, and the camera has widely been misidentified as a Kodak K-24.

It’s actually a Fairchild K-17, which was designed by Fairchild Camera and Instrument and manufactured under license for the US Air Force by Folmer Graflex in Rochester, New York (Kodak’s hometown), in the early 1940s. 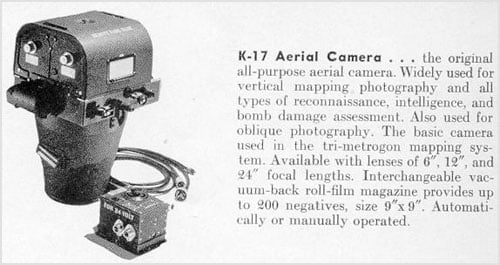 Shooting this camera handheld was not an easy task:

While these cameras were normally clamped into mounts, a pair of handles and a viewfinder could be fitted to K-17s and K-18s for hand-held operation. What “hand-held” meant is subject to interpretation, as these cameras were not lightweights. With a 200 foot roll of film, the A-5 film magazine used with the K-17 weighed 30 pounds. A complete K-17 with 12″ lens cone and a full magazine weighed about 55 pounds. With a 24″ lens instead of the 12″, the weight climbed to near 75 pounds. [Source]

So that camera you see being held by the airman above weighs a whopping 75 pounds — no wonder he looks like he’s straining to pose with the “handheld” camera. Thankfully, cameras these days (especially aerial photography ones) are generally much smaller and lighter.

Update on 11/21/20: Here’s a look at the kinds of photos that were captured with these massive aerial cameras.

ON1 Launches New Versions of its Four Professional Plugins