I think this comparison kind of makes sense when we take a look at the form factor of both “cameras” and the price points.

Now, just to be clear, the iPhone is probably going to beat the Ricoh as the better overall camera. It is definitely more versatile with its dual cameras and very good video specifications. However, when you buy Ricoh GR III you don’t buy it to film videos with it or for the zoom lens – which it doesn’t have. We Ricoh GR users use our legs to zoom in and out.

I dare say the majority of users are going to use this camera for one and one specific purpose only, which is street photography. It is a compact camera and it fits in your pocket so you can actually take it with you in almost any situations. That is where I see the iPhone as a close competitor. 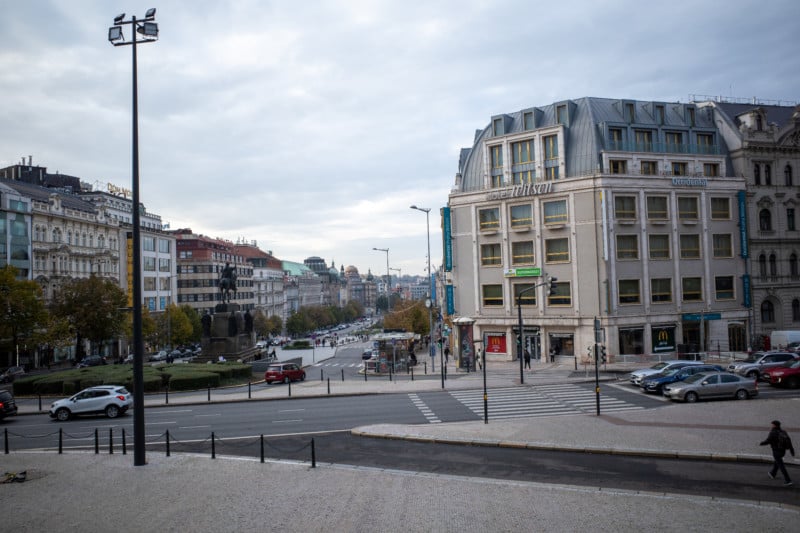 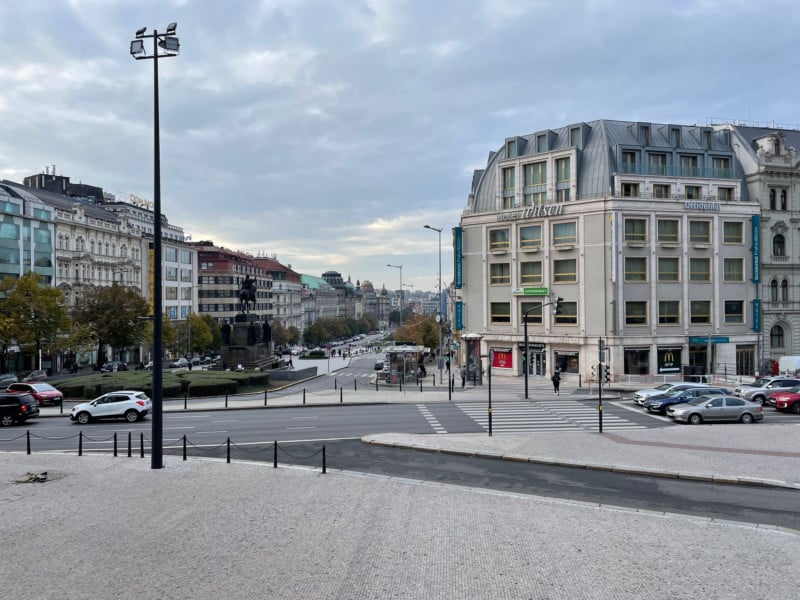 Ricoh GR III was released earlier in 2019. It has a 24MP APS-C sensor with an 18mm f/2.8 lens, which comes out to a 28mm equivalent. It has a 3-axis in-body stabilization system, touchscreen LCD, and it can be charged via a USB Type-C port.

The iPhone 12 is equipped with 2 cameras, a Wide and an Ultra Wide, which translates into 13mm and 26mm equivalent for us photography types. It has a new sensor-based image stabilization system and Apple claims you can take up to 2 seconds handheld exposures. That’s a bold claim… something I am definitely going to test out. There is also a feature called Night Mode that helps you to take better pictures at night.

Meanwhile, Apple’s new “PRO Raw” and the LiDAR scanner is something Apple reserved for the “Pro” version which I will hopefully be able to test out later this month. 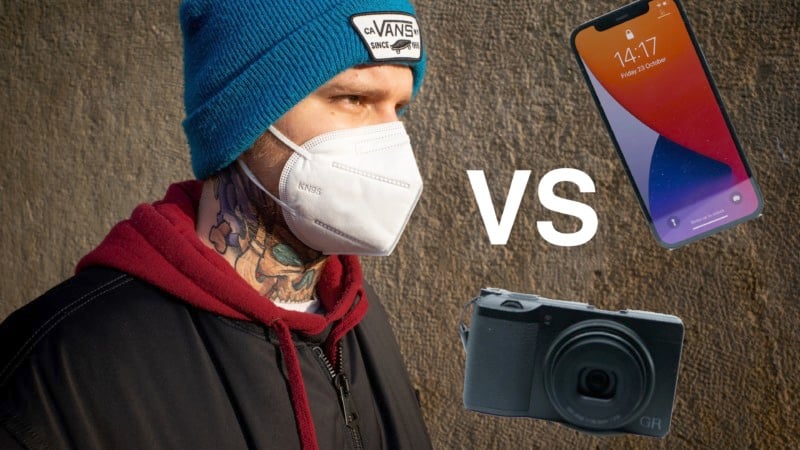 So let’s talk about controls. Right from the start we can see that Ricoh offers more photography settings because… well… all the settings are about photography. That’s great if you want the control, but can be a nuisance if you just want to shoot full auto and not worry about anything else.

What I love about Ricoh is that you can save 3 custom modes which you can adjust to your liking. My favorite function is the “highlight weighted” metering feature, which lets you expose just for the highlights—something you would need to download an external camera app to achieve on the iPhone. Another great feature of GR III is the ability to take a photo with a single tap on the LCD screen.

The iPhone, on the other hand, is the king of social media. But not only that. You will appreciate the option to simply share the photographs via iCloud and photo streams not only for your family events. With the iCloud plans you can basically take an infinite number of photographs without worrying about storage. With Ricoh. you have the option of 2GB of internal storage and, of course, a memory card slot. Which again can be a benefit or a pitfall depending on what you want.

The iPhone also has a beautiful OLED screen that’s twice as big as the LCD on the Ricoh, and it can also take HDR photographs. For casual shooter that can be a plus, but personally, I don’t think it’s something you really want or need if you do street photography. Finally, the iPhone is charged with the lightning connector which is annoying considering everything else uses USB Type C but you know… what can you do. 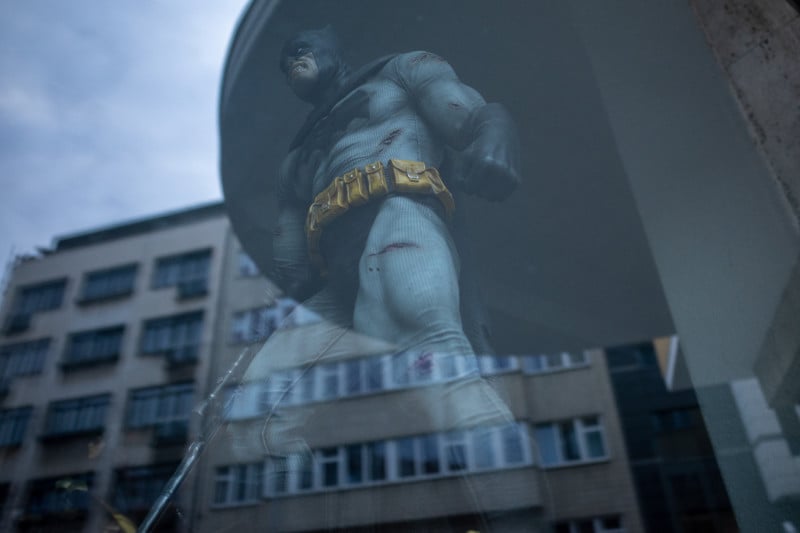 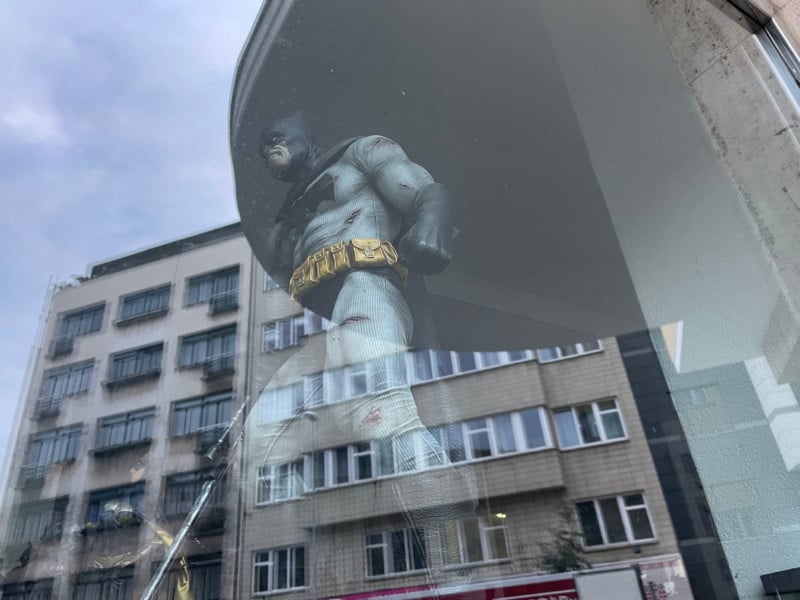 For this test I was using the default camera app and I have to say I was pleasantly surprised that it has been improved a lot. Where there used to be black bars on older iPhones we now have this transparent frame. Apple is probably using the ultra wide lens to show you the surroundings of your frame.

I have been saying for a while that LCD screen is the new viewfinder since you can easily see what is included or left out of your frame. With this new feature we are getting much closer to that. The ratio is still limited to 4 by 3 unlike in any “standard” camera, but I think in the end it is just a signature of that medium. When you see a square image you usually think of medium format. When you see 4 by 3 you know it was taken with a smartphone.

Now let’s talk about the image quality. I was surprised that the iPhone with a much smaller sensor is able to produce photographs with so much detail. When you check the file size the Raw photos from the GR are approximately 10x bigger, so they store far more data to work with. The iPhone, on the other hand, uses a powerful new CPU to drive Smart HDR and other computational photography features, helping to close the gap. This can be a plus for casual users and iPhone is going to be a killer for those family vacations. 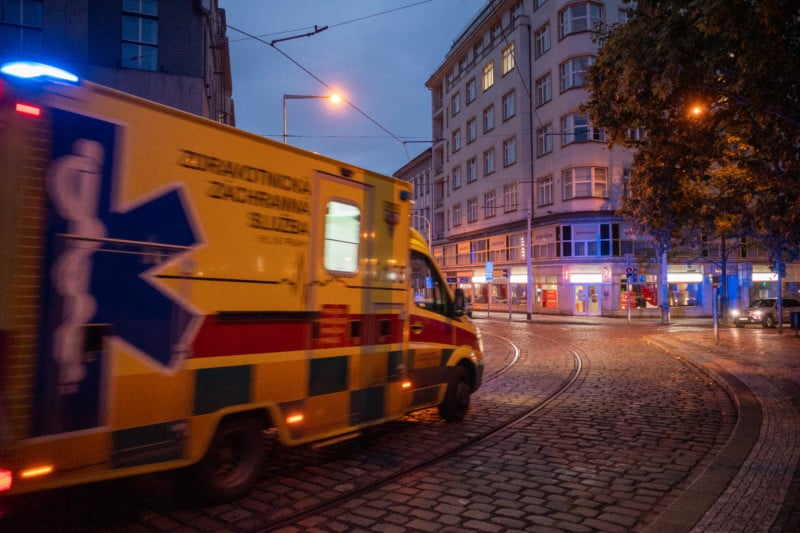 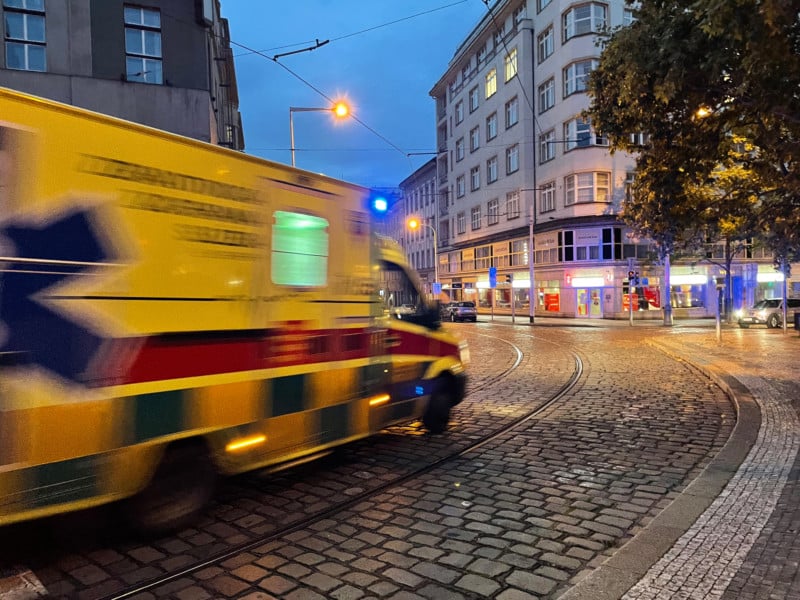 Ricoh on the other hand offers much more creative options. The resolution is approximately twice as big as on the iPhone. You would however have to print actually quite large prints to see the difference.

Even though the iPhone is equipped with an f/1.6 aperture, it hardly produces any bokeh naturally. I would say it doesn’t matter that much for street photography since, you know, unless you’re Thorsten Overgaard you don’t really shoot wide-open all the time. I usually end up shooting between f/5 and f/8 with my full-frame cameras. That being said, the iPhone has artificial bokeh in the Portrait mode, creating a depth map of the image and then artificially applying blur to make the background layers progressively more out of focus.

Interesting thing is it offers you f/1.4 “simulation” even though the lens is actually an f/1.6. This, of course, looks ridiculous but if you play with it you can find a sweet spot where it actually looks fine. I think this one works best at f/5.6. Apple also added a LiDAR scanner to improve both low-light focusing and Portrait Mode this year, but they saved it for the iPhone 12 Pro.

The night photography is fine. It uses something called Night Mode which combines multiple exposures via computational photography to produce a cleaner final image. This mode uses a little too much sharpening and contrast for my taste, but it’s far better than a single high ISO exposure from such a tiny sensor. I think if Apple can get to some kind of compromise when it applies its filters but still keeps the Raw file untouched to work with that would be great.

I played with iPhone 12 for one and half days so these really are just my first impressions.

Anyways, for actually photography process. the Ricoh beats the iPhone with the grip. Holding the phone is never as good as a tactile camera with “feedback” unless you’re going to buy some kind of grip for the iPhone, which hardly anybody will do. Also holding a phone while taking photos makes you look like… well… someone taking photos with the phone.

To sum it up I just want to share with you the pros and cons of each device.

The Ricoh GR III is a highly specialized tool that will not tick a lot of boxes. You can think about it like a particular type of knife in the kitchen that you will use from time time—it’s only useful for one or two specific tasks, but for those things it delivers in spades. It offers more settings, better image quality, and its higher resolution for those who want to print larger images; however, the image quality isn’t as different as I expected.

Overall, I would say The Ricoh is better for creative photography. 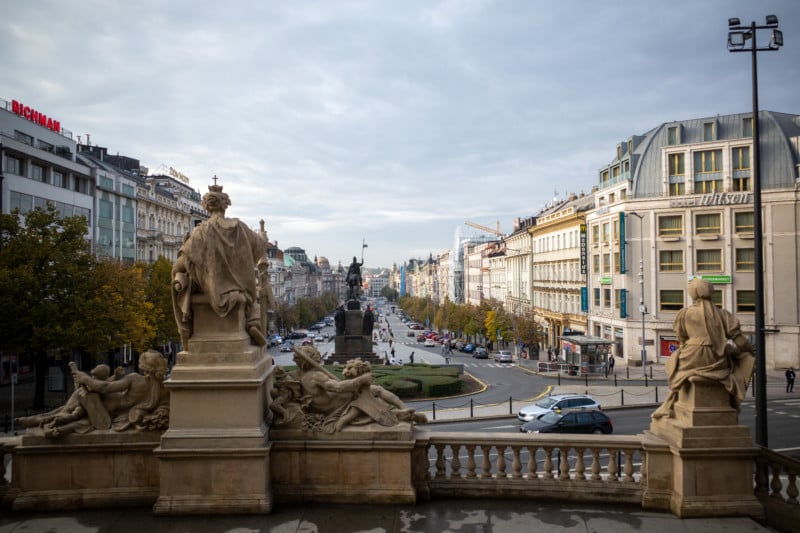 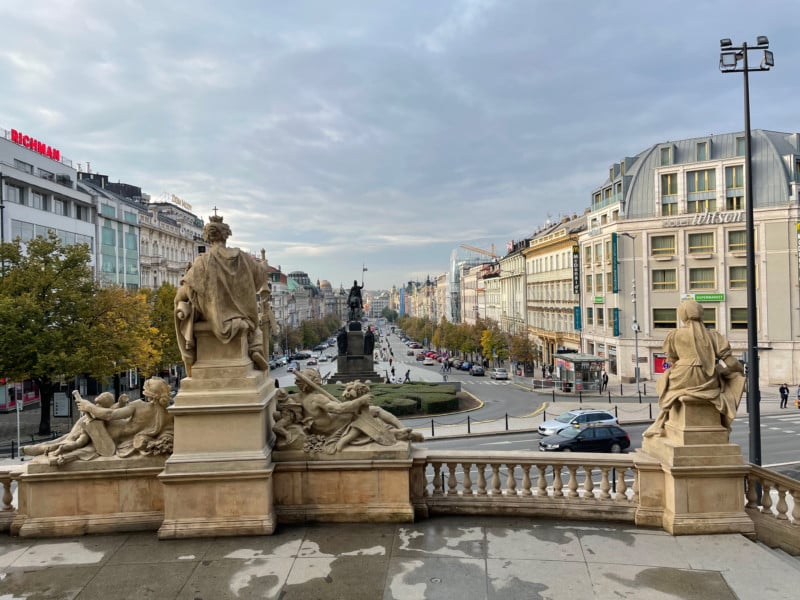 The iPhone 12 on the other hand is this Swiss army knife that can do a lot of things and do them all reasonably well. The computational photography is perfect for the times you don’t want to bother with photo-editing, but it also limits your creativity a bit. Maybe the Apple PRO raw and LiDAR will change that with iPhone 12 Pro.

I would say if you are complete beginner the iPhone, and especially iPhone 12 Pro, offer a great value. You get 2 (or 3) different lenses, everything is automated for you, the depth of field means you won’t ever have anything out of focus, it takes great video, and it’s a perfect camera to have around for family events. The image quality is worse than Ricoh GR but if you are only sharing on social media it is hardly noticeable.

I think it is exciting how much smartphone photography has improved over the past few years, and I find myself wondering what we are going to see next. When I was watching the Apple Event a couple of weeks ago, I was just wondering what would be possible if Apple produced a full-frame camera with such computational power…

Well anyway, check out the video for more images and video footage examples and let me know what you think about this comparison. Do you like the new iPhone lineup for street photography? And if you don’t, what is it that the phones are still missing?