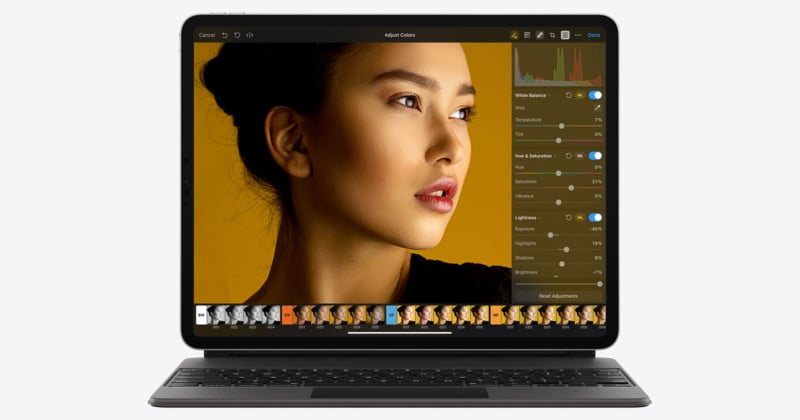 Pixelmator Photo—the iPad version of the popular Mac app Pixelmator Pro—has just released a major update with a new machine learning-based tool at its core. Called “ML Super Resolution,” the tool allows you to upscale (AKA “Enhance!“) your photos with just one tap.

The update is part of Pixelmator Photo 1.4, and it looks to be a direct port from the company’s desktop class editor. According to the Pixelmator team, ML Super Resolution “will allow its users to enlarge images—photos, illustrations, paintings, or designs—with just a tap, while at the same time preserving and even enhancing textures, edges, and other important details.”

The technology works by creating a “layered representation” of the photo that is spread over 100 separate channels in order to detect and properly enhance details such as “edges, pattens, textures, gradients, and colors.” To produce the best possible results, each of these channels are upscaled individually and recombined at the end.

You can see the feature in action in the video below:

Of course, AI-powered image enlargement isn’t new—Topaz Labs’ Gigapixel AI has been doing it for a while and there are a plethora of free online tools that will do the same. But Pixelmator claims their processing requires “up to 62 thousand times more processing power than traditional methods,” which makes it all the more impressive that they’re able to run it on a mobile device.

In fact, according to the Lithuanian company, this is “the first AI-powered image enlargement tool on a mobile device.”

Pixelmator Photo 1.4 with ML Super Resolution is available today from the iOS App Store as a free update for existing users or an $8 purchase for new customers. You’ll need iOS 11 or later and a compatible iPad in order to install it.