This morning, YouTuber Matt Granger—known for many years as “That Nikon Guy”—dropped a bit of a bombshell: he’s decided to sell all of his Nikon DSLRs and lenses. In fact, he already did it, and is now brand-less as he tries to decide what mirrorless system he’s going to go with next.

To be fair, Granger hasn’t gone by “That Nikon Guy” since 2013, but up until this week, the vast majority of his gear closet was still taken up by Nikon DSLRs and Nikon F-Mount Lenses… and not just because they’re bigger than their mirrorless counterparts. Which begs the question: why now?

We caught up with Granger over email yesterday, as he prepared to release this video, to find out. 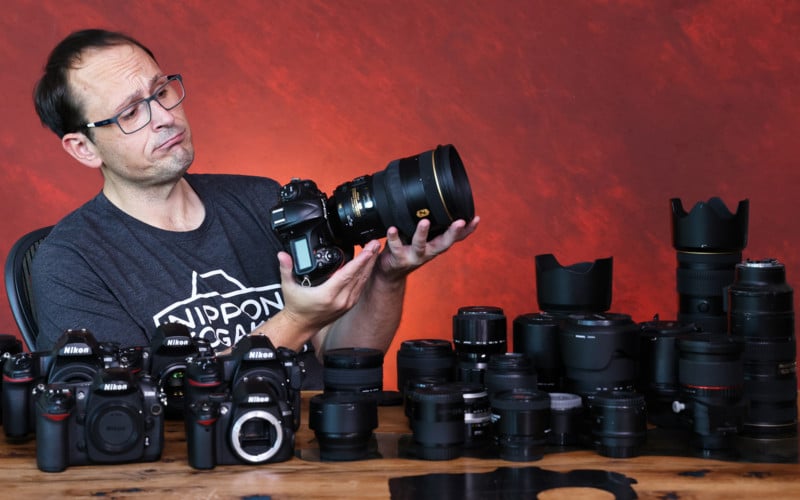 The first thing Granger wanted to make clear is that this is not his way of saying that Nikon is in trouble or that DSLRs are dead. If anything, he says, he’s held off longer than most because the “switch to mirrorless” craze came a couple of years early in his mind.

“I am probably a few years late on the ‘I sold X for Y’ coverage – it seems like every photographer and their assistant moved mirrorless years ago, and I may have appeared like a luddite or a contrarian for staying with my Nikons,” he told PetaPixel. “Truth is, the timing wasn’t right for me. The mirrorless options back in 2018 didn’t satisfy me preferences and professional needs to the point that the extra features justified the cost and upheaval of switching.”

But a lot has changed since 2018, and as companies addressed all of the concerns he once had, it’s gotten far more tempting to bite the bullet and make a change.

“Now in 2020 the camera and photography market has shifted significantly. EVFs are awesome now, build quality is up and more options are on the way,” he continued. “So with my DSLRs due to update soon, and them going unused now, it all came together.”

Believe it or not, Granger doesn’t say what brand he’ll be switching to; in fact, he goes out of his way to say that he genuinely doesn’t know what brand he’ll rely on next. After a lot of thinking, he just felt that it was time to move on from Nikon and the DSLR.

“I’m not doing this to get clicks or to just be flippant about it, it’s something that I take really seriously, and I sincerely don’t know what I’m going to buy next,” says Granger. “If the [Canon EOS] R5 that I’m filming on here fixes the overheating, that’s a killer camera with amazing lenses […] the Sonys have come so far… and if the a7S III is as good as it look on paper that’s a real potential option as well.”

Unfortunately for Nikon, one system he barely mentions is the Z-Series, so while he clearly hasn’t ruled it out, it doesn’t seem like Nikon mirrorless will be Matt’s next stop.

If you’re curious to hear all of this from the man himself, or see all of the gear that he’s just gotten rid of, check out the full video up top and keep an eye on Matt’s channel moving forward to find out what brand/lens mount ultimately wins him over.

Image credits: All photos by Matt Granger and used with permission.