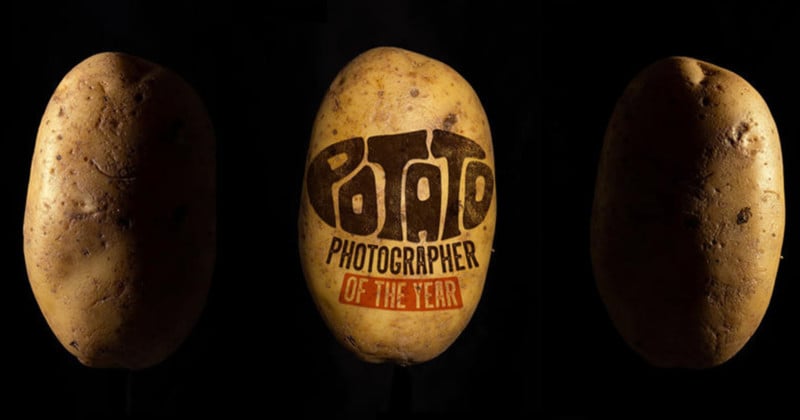 *Checks calendar* … Nope, it’s not April 1st. There really is a “Potato Photographer of the Year 2020” contest, judged by the likes of Martin Parr, and they really did just reveal the winners of the contest earlier this week.

Potato Photographer of the Year 2020 is a silly photo contest created in partnership with the contest platform Photocrowd to benefit the Trussell Trust food banks. The competition was inspired by photographer Kevin Abosch’s famous photo Potato #345 (2010), which sold for a staggering $1 million at auction in 2016.

This year, the honorary of Potato Photographer of the Year goes to photographer Ray Spence for his photo of a spud getting a haircut, titled “End of Lockdown.”

“This picture manages to introduce a topical lockdown obsession to the brief of photographing a potato,” says Nigel Atherton, Editor of the magazine Amateur Photographer and contest judge. “It takes a great imagination to see a sprouting potato as a head covered with hair, and there is a lot of humour in the way the picture has been executed.”

In addition to bragging rights, Spence wins a Fujifilm X-A7, one year membership to the Royal Photographic Society, a one-day workshop with photographer Benedict Brain in Bath, and a 3-year ‘master-level’ Photocrowd subscription. Not a bad haul given that submitting a photo cost him only a £5 ($6.50) donation to the food bank.

Scroll down to see some of the runners up, and if you want to see the full shortlist or read the judge’s comments about each winning photo, head over to the contest page on Photocrowd.

We’ll be honest: we’re not sure the idea behind Potato Photographer of the Year has the legs to become an annual thing. But if it does, we’ll hope to see a lot more entries like Spence’s winning image in the coming years.

To learn more about this year’s contest, the judges, and the charities involved, click here.