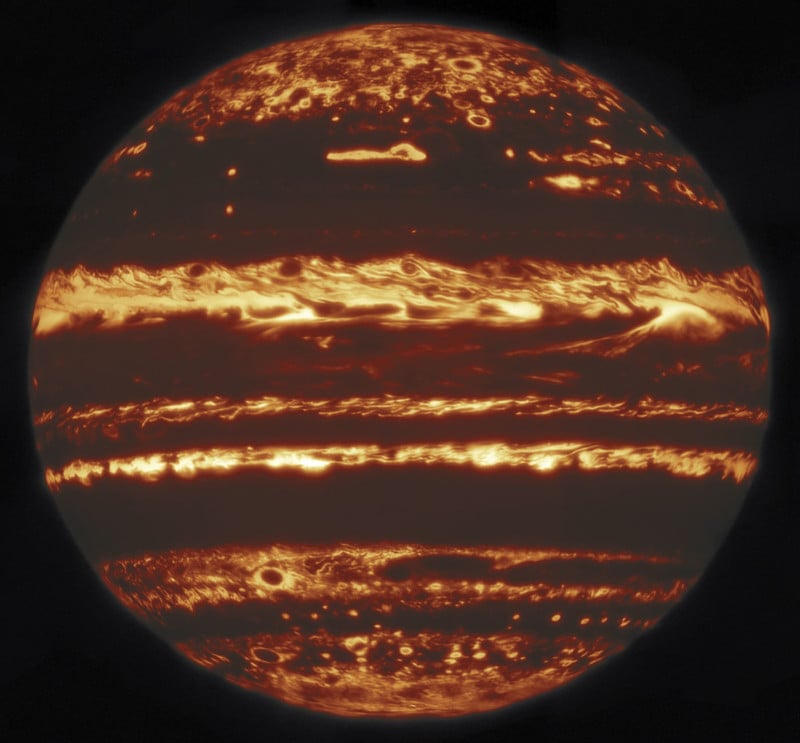 Scientists have created the highest-resolution photos of Jupiter ever captured from the ground, including this gorgeous infrared photo created by stacking a large number of exposures.

The photo above was created by shooting 9 “pointings” from the observatory with 38 exposures captured for each pointing. The sharpest 10% of each set was selected and stacked to create a sharp image of 1/9th of Jupiter’s full disk. Those 9 pieces are then combined to create the full view of the gas giant.

“Even though it only takes a few seconds for Gemini to create each image in a lucky imaging set, completing all 38 exposures in a set can take minutes — long enough for features to rotate noticeably across the disk,” the observatory writes. “In order to compare and combine the images, they are first mapped to their actual latitude and longitude on Jupiter, using the limb, or edge of the disk, as a reference.

“Once the mosaics are compiled into a full disk, the final images are some of the highest-resolution infrared views of Jupiter ever taken from the ground.”

“The Gemini data were critical because they allowed us to probe deeply into Jupiter’s clouds on a regular schedule,” says team lead Michael Wong of UC Berkeley. “We used a very powerful technique called lucky imaging. […] These images rival the view from space.”

When compared with optical and ultraviolet images captured by the Hubble Space Telescope, the infrared Gemini photos helped confirm that the dark spots in the famous Great Red Spot on Jupiter — a ginormous storm — are actually holes in the clouds rather than darker-colored clouds.

“It’s kind of like a jack-o-lantern,” Wong says. “You see bright infrared light coming from cloud-free areas, but where there are clouds, it’s really dark in the infrared.”

(via Gemini Observatory via Business Insider)

Photographers Turn Their Homes Into Cameras to Capture Pandemic Life