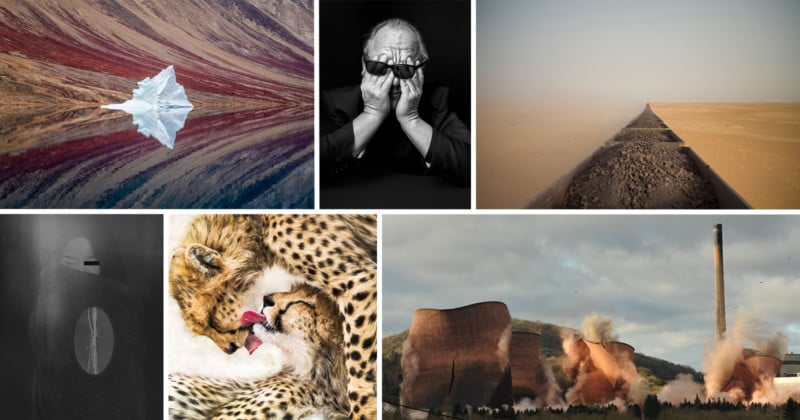 The World Photography Organization has revealed the category winners of the Sony World Photography Awards ‘Open’ competition for 2020—in other words: “the best single images from 2019.” From Architecture through Wildlife, 2019 produced some truly incredible imagery.

Over 100 photographers were shortlisted by the “Open” competition, but only 10 can claim the title of category “winner.” These include a Biblical group shot from an Iggy Pop concert, a charming cheetah portrait, a powerful protest photo from Colombia, and a striking photograph of a dead fish in a plastic bag that, tragically, won the “Still Life” category.

All ten winners will receive “the latest digital imaging equipment from Sony,” and will go on to compete for the title of Open Photographer of the Year, which will be announced on June 9th.

Image Description: Having returned to Sicily for the holidays, myself and a group of friends visited Fiumara d’Arte, an open museum showcasing sculptures made by contemporary artists, located along the banks of the Tusa River. Among these works is 38° Parallelo by Mauro Staccioli – a pyramid that stands at the exact point where the geographical coordinates touch the 38th parallel.

Image Description: This picture is from my series ‘Hua’, which means flower in Chinese. Flowers are often used as metaphors for life and eroticism in art. Hua explores the commonalities and connections between flowers and the feminine – in particular, emotional vulnerability and sensitivity. Qualities such as calmness, and emotions such as uncertainty, fear, anxiety and loneliness are translated into conceptual and artistic forms.

In Knot, I use a combination of light and texture to create strong visuals that heighten the senses. I like to use symbolic and metaphoric ingredients in my work, which I hope allows the audience to blend their own subjectivity with the objectivity of the photograph, leading to different interpretations and emotions.

Image Description: When audience members were invited on stage to dance at an Iggy Pop concert in Sydney Opera House, Australia, on 17 April 2019, it showed the warm welcome Aussies extend to overseas artists who travel long distances to reach them.

A woman’s outstretched arm lunges to touch Iggy. He seems unaware of her approach as the crowd presses around him. One of Iggy’s assistants, Jos (in the grey checked shirt) tries to make some space around Iggy. The scene is reminiscent of a passage from the Bible: ‘Because she thought, “If I just touch his clothes, I will be healed.”’ (Mark 5:25-34, line 28). The image has been likened to religious paintings by Caravaggio, and his chiaroscuro technique. It went crazy on social media, making 40,000 people, including Iggy Pop, very happy.

Image Description: Despite measuring 125 meters high, it took the four cooling towers of Ironbridge Power Station in Shropshire, England, just 10 seconds to be demolished on 6 December 2019. The towers had been a feature of the landscape for 50 years, but were brought down as part of a new development on the site.

The demolition had been a long time coming – the towers were close to a river, railway line and protected woodland, so their destruction had to be precise. This picture was taken from my garden, which is on the hillside opposite the site.

Image Description: These cheetahs had just eaten an antelope, and were licking the bloodstains off each other’s faces. It’s a very rare posture, and one that reminded me of the traditional Chinese Tai Chi diagram. The picture was taken in Botswana in January 2019.

Image Description: Photographers for MOJO Magazine enjoy a rare degree of freedom and trust with what is usually an open brief. This allows us to capture our own experience with very high profile musicians. However, when photographing famous singers, we are often painfully aware of how many times the sitter has, well, sat.

I like to acknowledge this and asked Charles (aka Black Francis) to show me the level of frustration photoshoots can generate. He offered up this perfect gesture of exasperation, and the image ran as the lead portrait for the feature.

Image Description: Each year, eight million tons of plastic end up in our oceans – equivalent to emptying a garbage truck into the water every minute. This is my protest against pollution.

In my language (Spanish), we use the words “Naturaleza Muerta” to refer to still life, which ironically translates as “Dead Nature.”

Image Description: In recent years, a number of protests have broken out across Latin America. Reasons for this unrest range from a proposed end to fuel subsidies in Ecuador to a rise in metro fares in Chile, and feelings of inequality and a general lack of opportunity in Colombia. In Medellín, north-western Colombia, workers and street vendors were taking part in a march when the Medellin riot squad dispersed them.

Image Description: At 2.5km long, the iron-ore train in Mauritania is one of the longest trains in the world. It covers over 700km on its journey from the coastal town of Nouadhibou to the Saharan wilderness of Zouérat. More than 200 carriages are loaded with rocks in Zouérat, before the train begins its long journey back to Nouadhibou.

I rode the train in both directions in July 2019. On the first leg of the journey I learned that in order to photograph the full length of the train I needed to stand on the rocks for height, position myself in a rear carriage to get the full view, and keep the sun behind me. Alas, none of this was possible until the morning of day three, at which point I had almost given up.

This shot was taken as I balanced on my toes atop a mountain of rocks, trying to remain steady as the train jolted from side to side.

10 Astrophotography Ideas You Can Do From Your Backyard