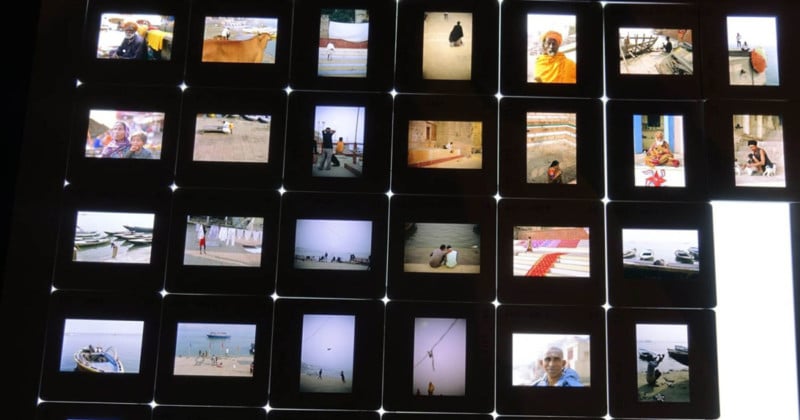 When I’m out photographing, my concentration is on making individual frames that matter, working the scene with my eye before shooting, and staying patient for the right moment. I’m not averse to taking multiple frames of the same scene, but I find it’s a better use of my time and film to put the work into getting things right the first time.

This usually provides me with rolls I’m satisfied with, but more often than not there are one or two scenes that stand out from the roll as being repeated shots.

This is more often than not the result of one of my worst film photography habits, something I’m very aware of this happening in the moment. What happens is that as I take a shot, I realize it probably isn’t that good, but instead of doing something drastic to fix it I take another frame with only very small changes made to the composition.

This means small sequences of iterations on a bad idea – essentially the same picture but with slight tweaks. The point at which this happens I’m no longer reacting to a moment, just over-investing in that failure. These really stand out in my contact sheets, to an annoying degree. I’ve been working on preventing this from happening, and one of the things I tried while in India was to set myself a simple challenge: to shoot a “perfect” roll of 36 exposures which are correctly exposed, correctly focused, correctly framed, and overall decent images. No repeated frames, every shot a unique idea.

For some, this may not be any kind of challenge at all and that’s sort of the point. It’s a small, largely inconsequential plan – just an exercise I wanted to work on so that my shortcoming in this area was at the front of my mind. I wanted all of the images to have merit of some kind, I didn’t want to end up with 36 snapshots — ideally a truly perfect roll would be 36 keepers.

It’s an arbitrary goal, and maybe a bit petty, but this is something that’s bothered me recently almost every time I wind on a new roll; how many frames am I about to waste? 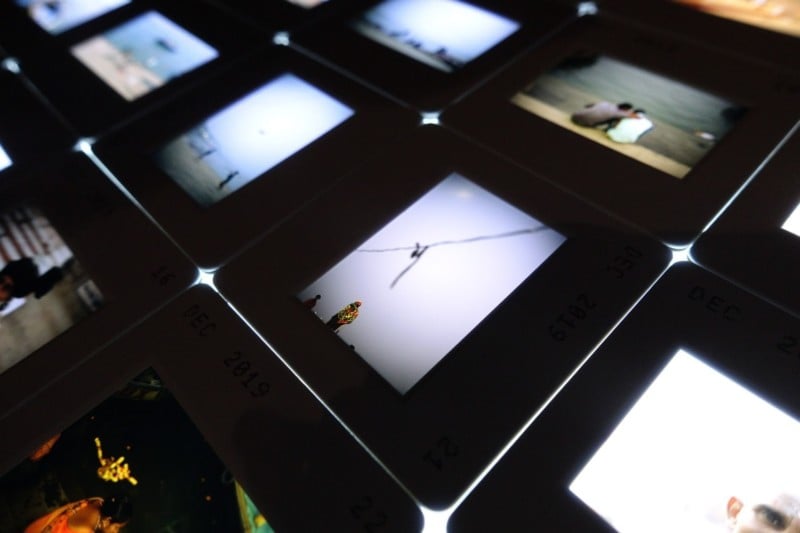 India gave so many opportunities, with so much happening, that I was a little unsure of how I should direct the intent of this exercise. I ended up deciding to dedicate a roll of Ektachrome as one of the few color rolls I shot there to portraits. Street portraiture is not my strongest area, but I did want to have at least a few to show for my time in India, maybe from an odd feeling of obligation. Putting this effort into one roll made sense as (in my mind) I would be able to spend a bit of time on it and then not have to worry about it afterwards. 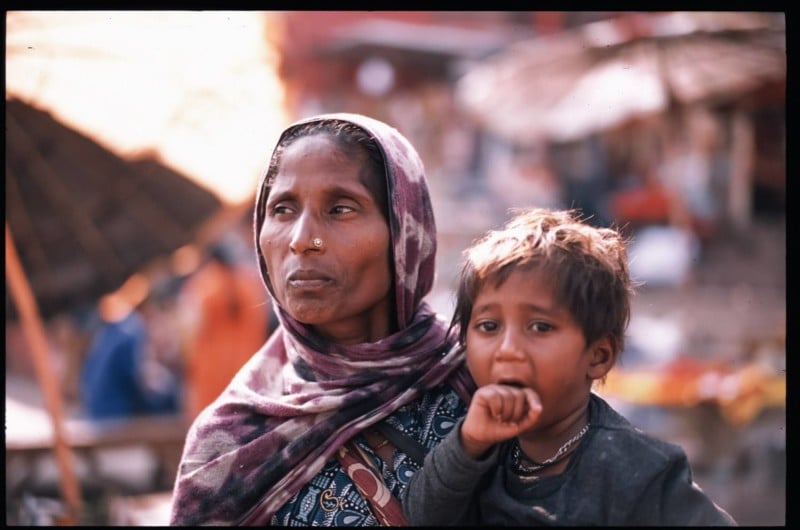 Portraiture is a nice repeatable format for what I wanted to achieve – I’m used to most factors being out of my control, but by approaching people and asking for permission I narrow down to only needing to worry about the technical aspects before clicking the shutter.

I loaded this roll of Kodak EKTACHROME E100 in the afternoon, while walking along the Ghats in Varanasi, and did my best to start searching for interesting characters to capture. It wasn’t difficult to begin with, but after not many frames I became distracted and decided to include a few street scenes into this roll – while still maintaining the goal of every frame being unique; I wasn’t as concerned about not fulfilling my portrait intent as I was with my original intent of using every piece of that film without waste. 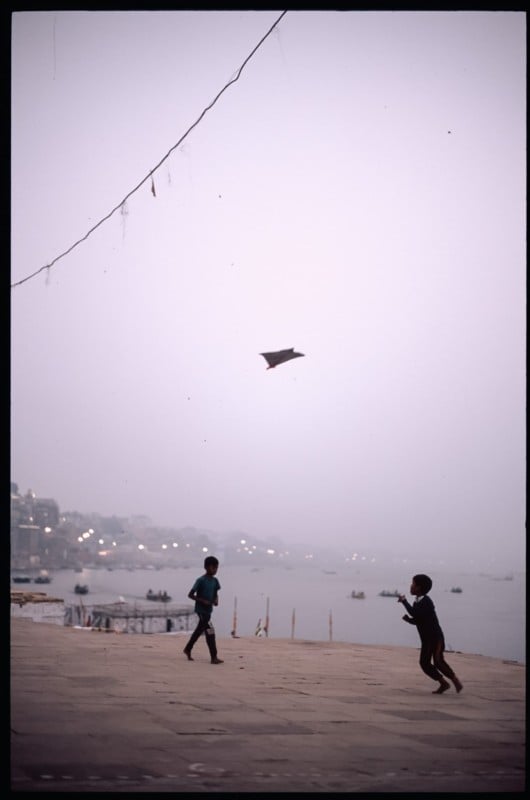 I think the pressure this exercise put on me was worthwhile, and something I’ll be trying to harness moving onwards. Nailing things in one frame caused me to really focus on what I wanted to shoot next, on being highly discretionary over what I wanted to end up on this roll.

It also kept my attention on mitigating possible contextual errors which sometimes occur – things like someone stepping into frame obscuring my shot – I was checking and double-checking my surroundings, maintaining constant vigilance over everything I had the power to control. However, this was only possible because of the slower subject matter I had chosen to work with and isn’t something I can always afford to spend time on doing, especially in faster-paced situations. 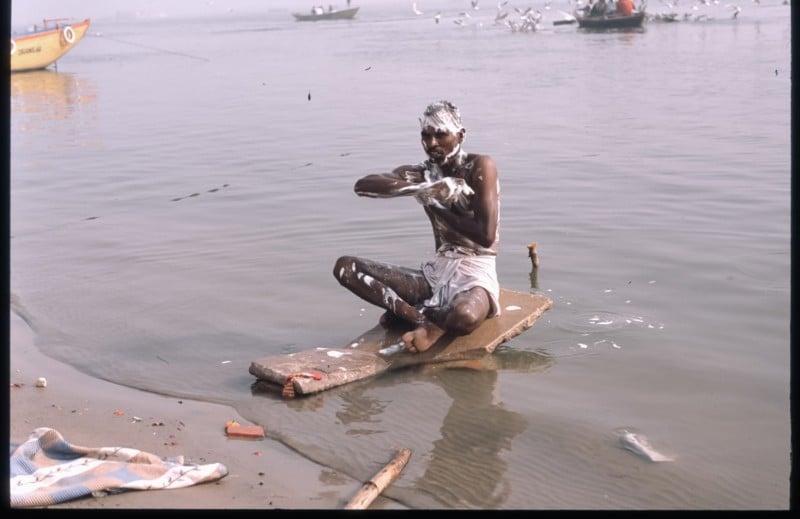 There isn’t as much that can go wrong for portrait work, but I still found a few frames where the subject blinked or looked away which would have been solved if I’d just slowed down, and maybe given my subject more notice that I would be shooting. My workflow for the portraits made with permission involved a friendly introduction before asking for a portrait. I didn’t have anyone say no, but I was limited by my desire to make images of interesting characters, rather than just settling on whoever was available in front of me. I would check my exposure before approaching, based on the light in the area they were standing, which meant that once they agreed I only needed to frame, focus, and click.

Other images were made candidly, which wasn’t an issue at any point in my trip – aside from the people who want money for an image my camera was more or less ignored (and anyone who would want money for a portrait isn’t usually the kind of person I’d want to photograph in the first place). I didn’t pose anything – my usual instruction for a portrait is to just ask my subject to relax their face, or to carry on doing what they were doing if I saw them performing an action.

You can definitely tell which were made as a portrait and which ended up being just another candid scene. I tend to make portraits fairly close, within a few meters, and I make sure to isolate my subject. Head and shoulders “passport” style headshots are something I’d prefer to avoid, I think environmental portraits make a lot more sense to me and fit better in my portfolio. I managed this quite well, but I think my inexperience in portraiture shows and is something worth working on for the future.

I am left with 38 original frames on this roll as intended, but only 6 that I would consider “real” keepers, and only 12 are portraits – the rest are street scenes. Of those 12 portraits, two are right out as the subject blinked, and a couple of others have uninteresting characters. Only one was a truly bad frame, with an unclear subject, a poorly executed idea. 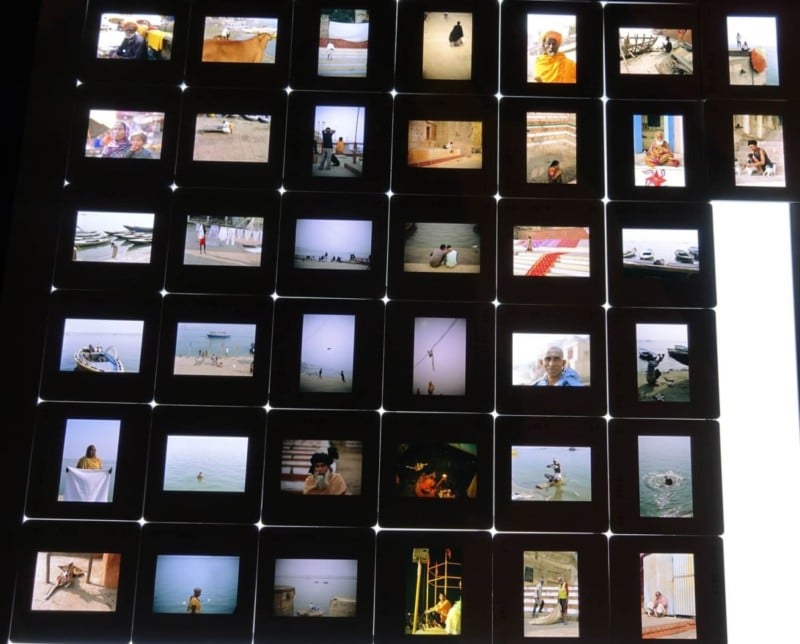 Something I didn’t really consider at the time, but which was very obvious when I reviewed the results, was that while portraits may be a nice, easy, repeatable shooting situation I don’t really see them as keepers. Portraits don’t usually interest me, especially when made on perhaps the most boring terms possible, so even if it had been a perfect roll of 36 wonderful portraits I wouldn’t really have anything to do with them. I wouldn’t have a good measure to judge their quality either, I’m simply not a portrait photographer as I said before – there would be zero meaningful keepers, so I’m happy in retrospect that I broke away from portraiture in the moment.

This means that while I’m happy I was able to make 38 unique images I’m less happy that some of those are unusable (to me) portraits. There were also those examples where my subject blinked or looked away, and a couple that are just boring images overall – saying this was a real success would be to lower my standards, and I don’t want to move my goalposts, so I have to accept that it was a good effort, but ultimately a failure. 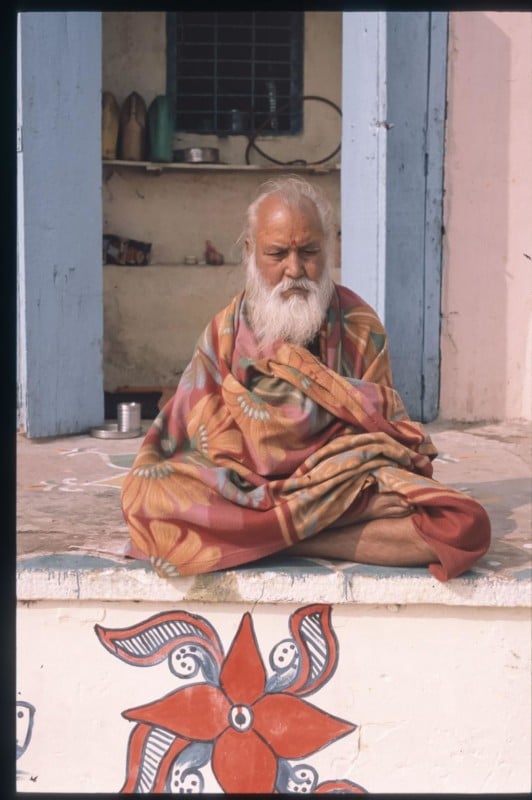 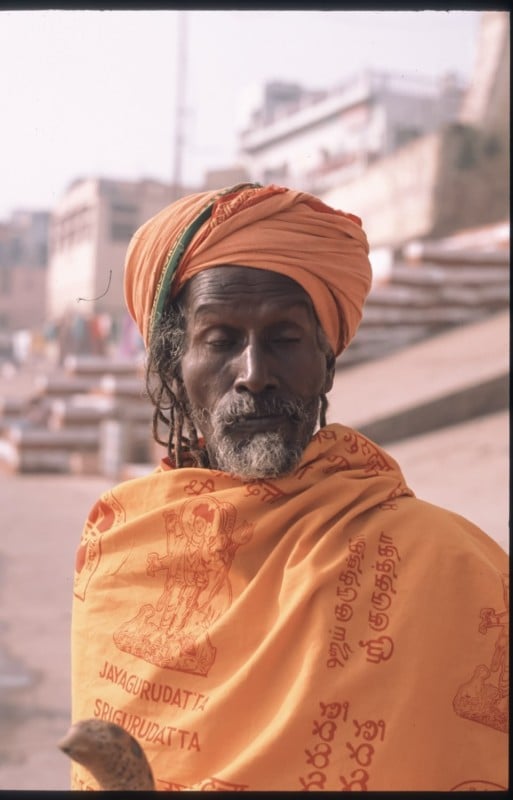 While this roll from Varanasi was loaded with specific intent, there are a few others from the trip which I feel are worth discussing. There was one other roll of slide film I shot there, loaded in Agra, but before I’d decided to deliberately work one frame at a time. Despite this, I actually only had a couple of scenes which resulted in repeated frames, but a reasonable number of keepers, and a collection I’m mostly proud of. 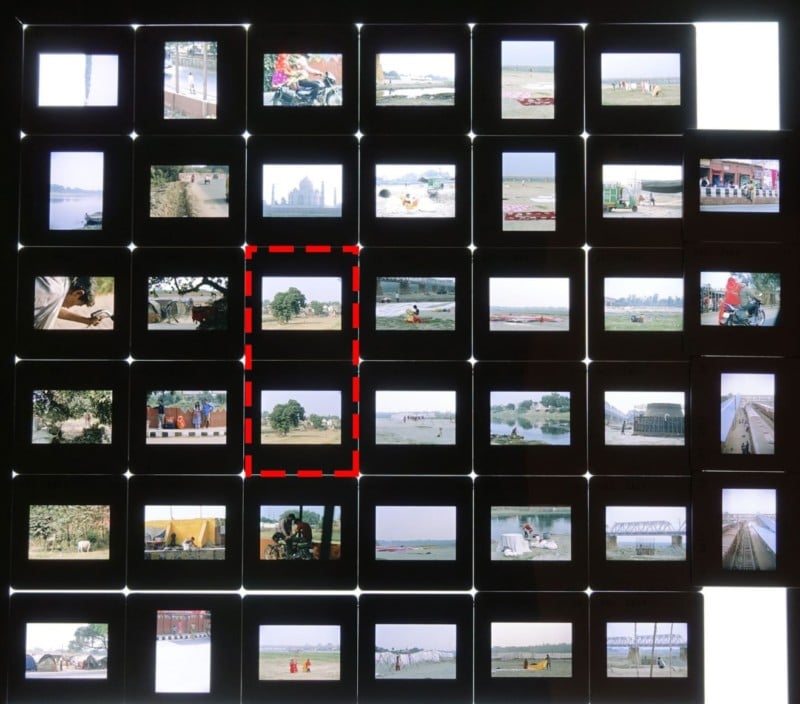 I think the expense of slide film coupled with the absolutely unique and distinct result it offers to my usual black and white negatives means that in my mind I am far more careful even without setting arbitrary limitations. 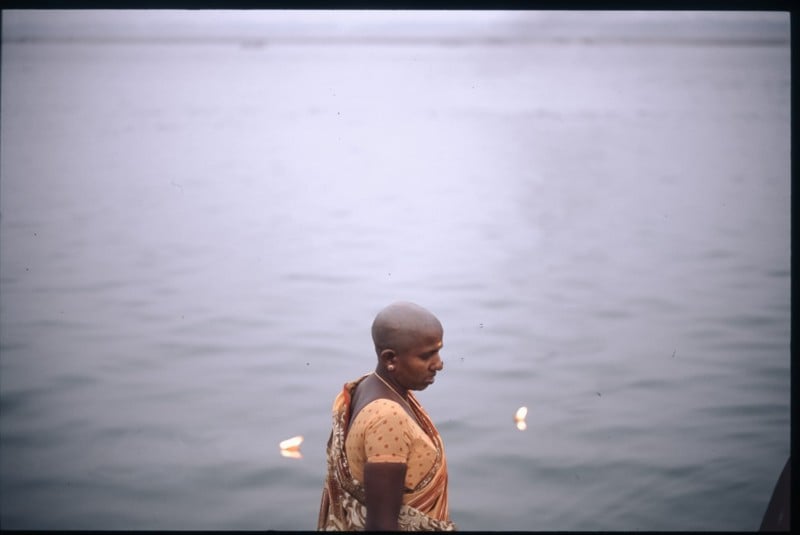 I would say that this is something I should try and harness moving forward, but I don’t know that it can be put down to the way I see slide film alone. Something that surprised me was that my snapshot rolls that went through the Olympus XA were actually some of the most unrepeated images of all. I think the faster, less considered way I shoot the XA means I don’t really care as much about dedicating my full attention to making that image — more thinking something is neat in the moment and reacting to it. This means far fewer “real” keepers by my standards, but all useable shots to contextualize the larger more serious body of work. I finished a roll of Fuji Venus 800 which was already in the camera, and then went through a roll of Kodak Portra 400 and Kodak Pro Image 100, and was pretty happy with the outcome. As color images, however, they have a lesser status and usefulness but definitely some things I can take from these rolls as lessons to take into my more serious photography.

In conclusion, by my standards, these exercises were overall a failure. I didn’t manage to produce perfect rolls at any point, but that doesn’t mean I’m entirely unhappy. I think reaching for perfection will almost always result in failure, but in doing so I did manage to accomplish some shots I really am happy with, and that’s what matters to me in the long run – perfect images as opposed to perfect sheets. I laid the groundwork for a path I will hopefully follow in my film photography, with efficiency and patience at the forefront of my workflow.

About the author: Simon King is a London based photographer and photojournalist, currently working on a number of long-term documentary and street photography projects. The opinions expressed in this article are solely those of the author. You can follow his work on Instagram. Simon also teaches a short course in Street Photography at UAL, which can be read about here. This article was also published at EMULSIVE.

How 10 Artists Are Staying Creative During COVID-19