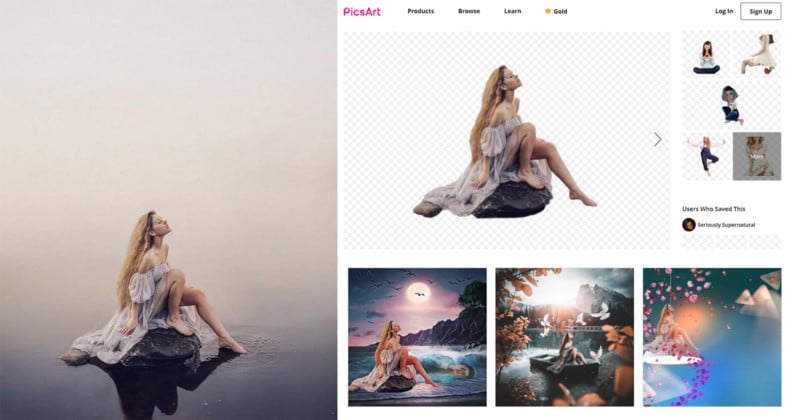 Photographer Rosie Hardy recently recently opened a pandora’s box of image theft and appropriation when she discovered that several of her images were being shared as “free to use” stickers through the PicsArt photo editing app. After a bit of digging, she found that her stolen photos had been used without permission, credit, or compensation over 1,500 times.

Hardy was first made aware of the theft by a user who had inadvertently used one of her photos to create a new work of art, sourcing the cut-out “sticker” from PicsArt.

“I found a photo I used one year ago as a sticker on my photo without knowing its [sic] yours,” wrote the Instagram user, fessing up to the mistake. “I use PicsArt to edit my photos and I found it there as a free-to-edit sticker.” 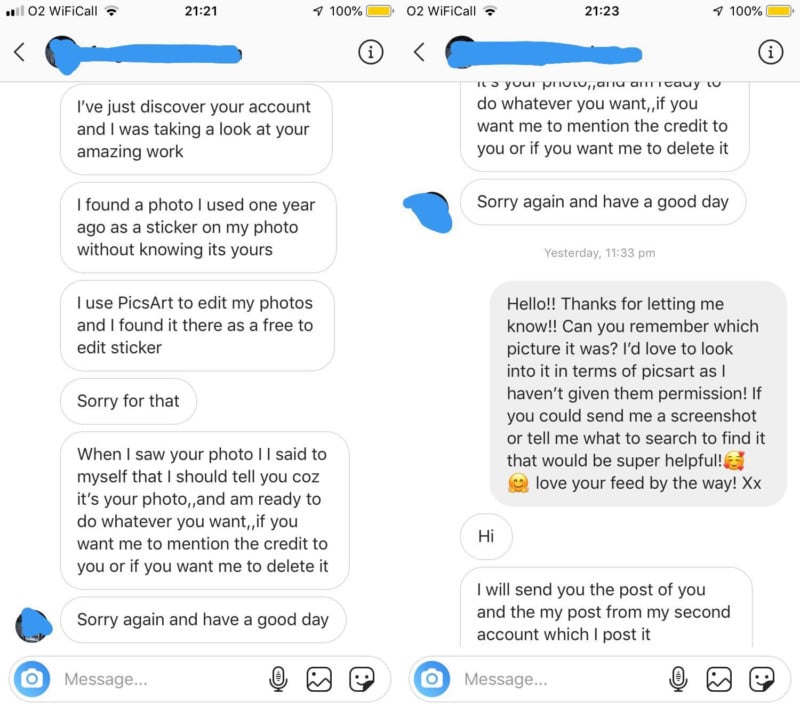 It didn’t take Hardy long to discover what the user was talking about. A few cursory searches on the PicsArt website revealed several of her photos—self-portraits, no less—had been used to create “free to use” stickers. The subject of each photo had been cut out and then shared as an asset for anyone who might want to use it, royalty free, without restrictions.

And it wasn’t just her photograph either, she’s discovered work by other, immediately recognizable names who shoot the same kind of surreal imagery. Photos by popular photographers and digital artists like @hobopeeba (779K followers), @The_Life_Of_Aivax (266K followers), and @Alexandriaslens (293K followers) had been stolen, with the subject of each image cut out and shared as a free to use sticker. 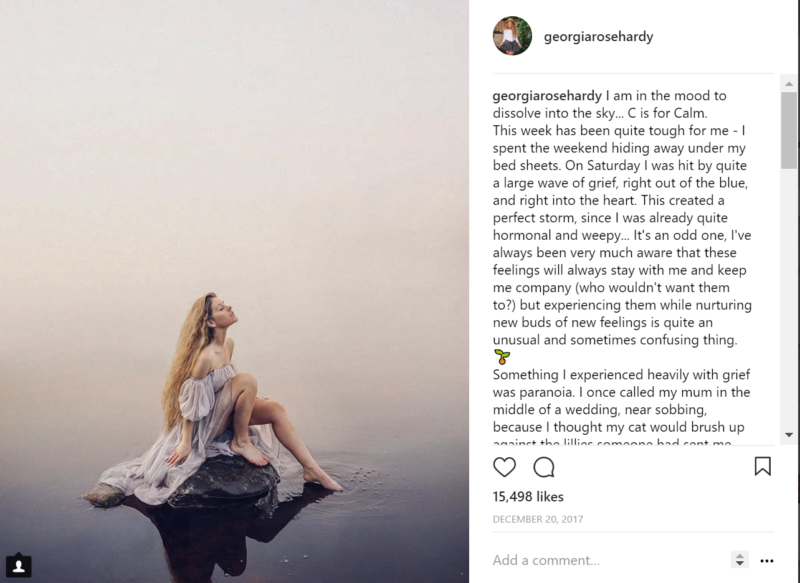 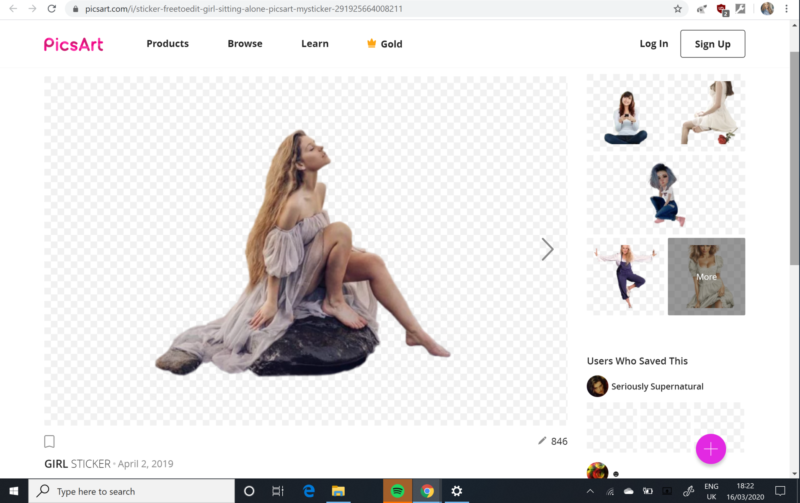 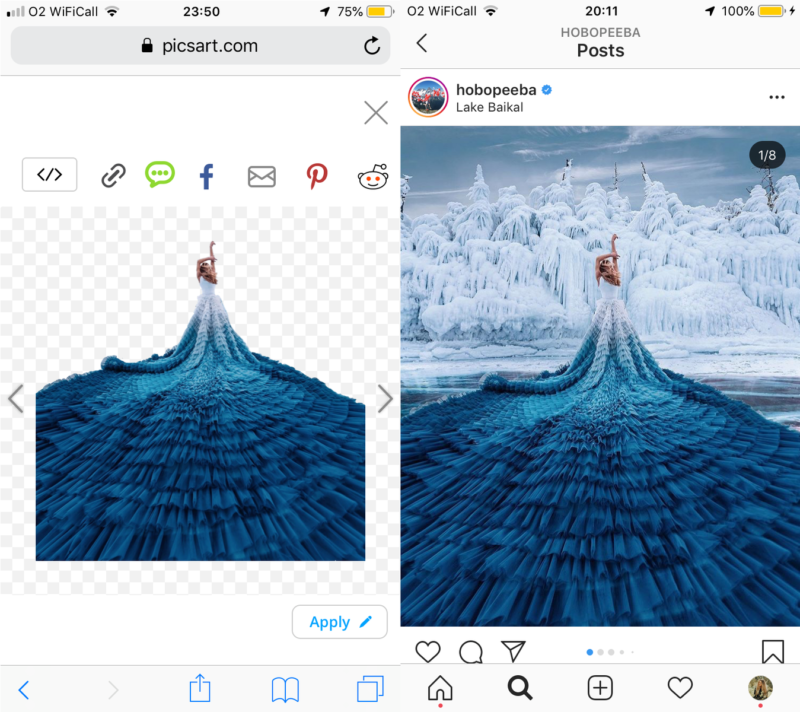 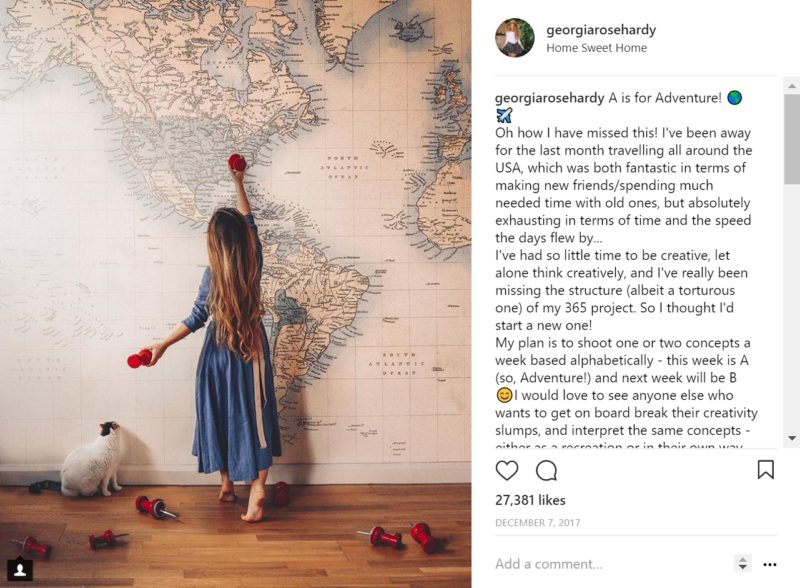 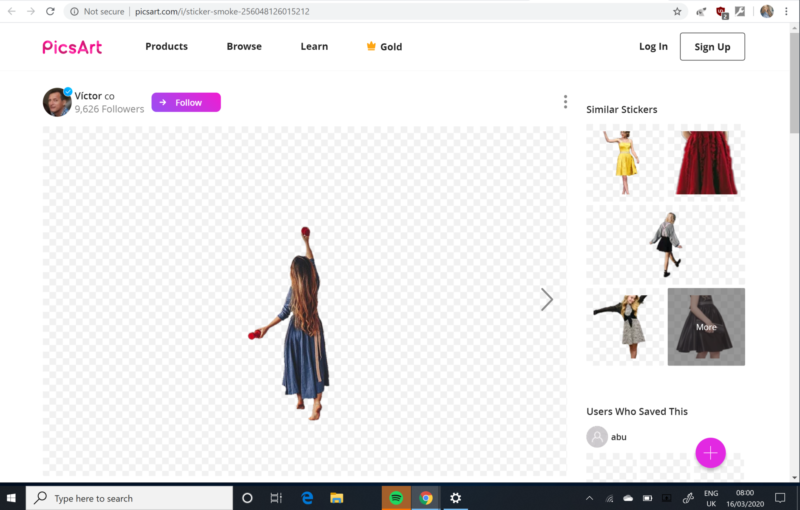 This is just a small sample, and each of these images has been downloaded and used by the app’s users, sometimes hundreds of times over, who use these stickers to create their own “remixes” through the app.

“My image, my likeness, my art has been churned into 846 new pieces of “art” – without my consent,” she writes on her blog. “Don’t get me wrong – I LOVE young people who want to learn to edit. I LOVE editing […] When I was 16, I copied ideas from the Internet left, right and center, and paid the price when it got frowned upon by the people I respected and looked up to.”

“But these aren’t just ideas – these are my actual pictures!” says Hardy. “How is this website not filtering these out?” 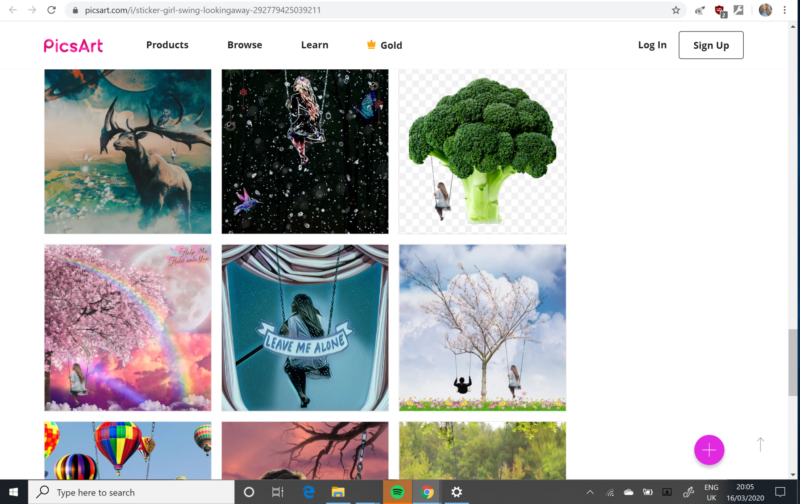 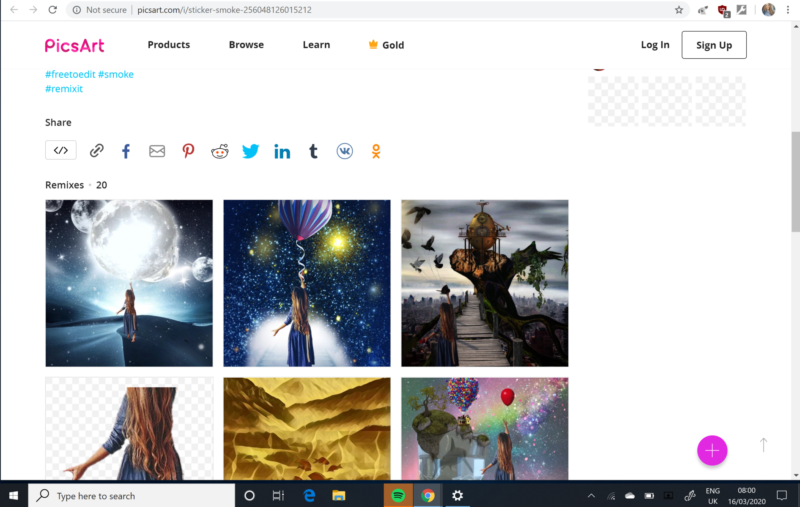 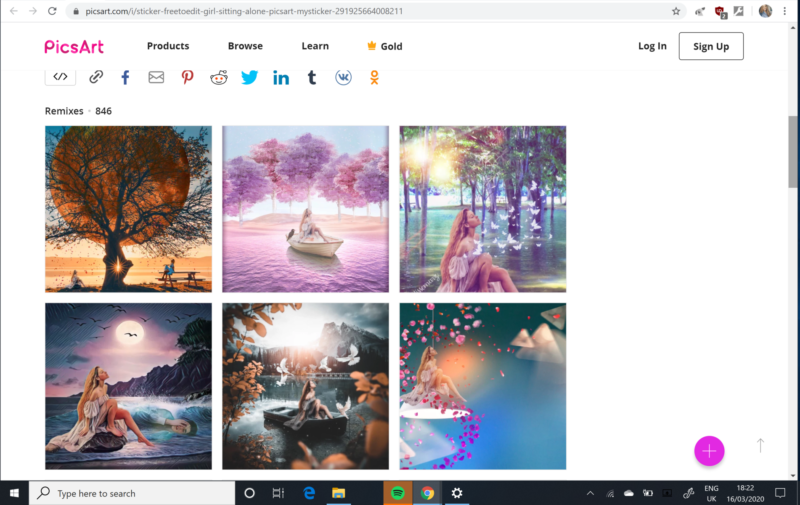 Worse yet, some of the Hardy’s self-portraits have been used in downright creepy creations like the two photos below: 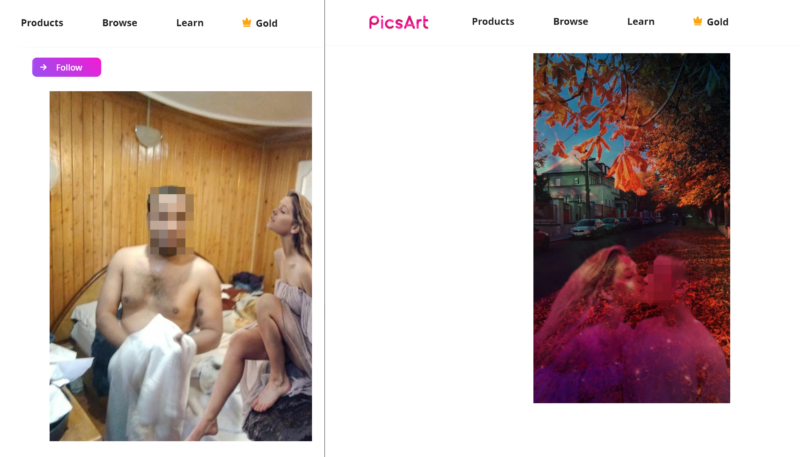 In all, after a single afternoon of sleuthing, Hardy found that her images had been used 1,547 times without her consent. And when she confronted PicsArt about it, finally reaching them through Instagram DM after several failed attempts, their response was basically to file a DMCA notice and police their site for them.

“We are sorry to know that some of our users downloaded your photos and made stickers of them,” reads the response, telling her to submit a takedown request and wait “a couple of days” for the team to take the photos down.

“As we have millions of users, we cannot keep track and on [sic] all of them to see whose photos they are using,” they continue. “We understand your frustration, but please note that those stickers were made by users, not by PicsArt.” 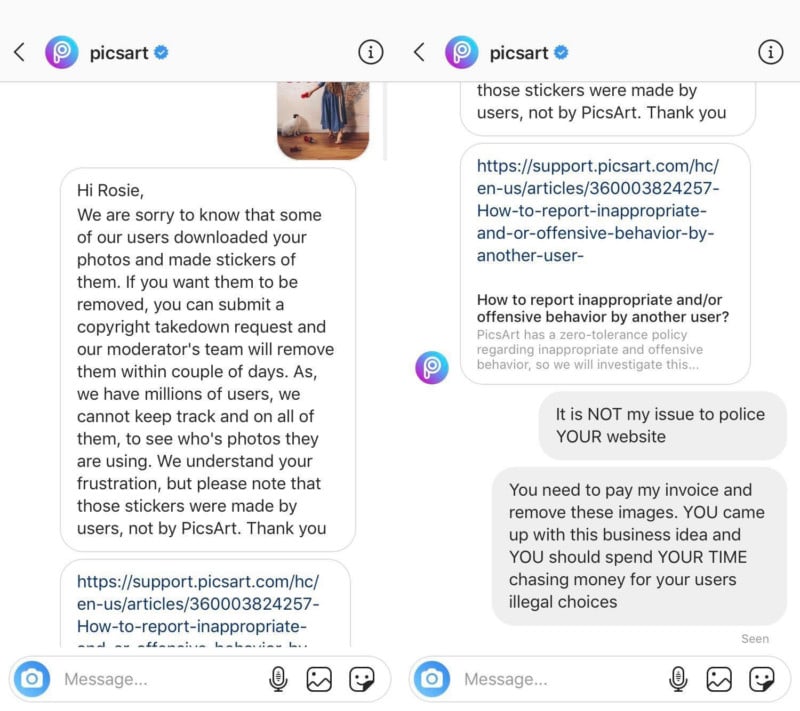 Unfortunately, Hardy tells PetaPixel that no progress has been made since her last communication with PicsArt. She also wanted to emphasize that it’s more important now than ever that self-employed creatives be compensated for the work that they’ve created, as the coronavirus “wipes out most of our incomes.”

It’s unlikely that her invoice will be paid, but Hardy hopes that, at the very least, PicsArt will make an obvious effort to mitigate the distribution of stolen photography.

“PicsArt is a Huge community. 2.2 million followers on Instagram, and in their own words ‘millions of images’ uploaded to their distribution platform,” says Hardy. “For an app so high up in the ranks, why are there no measures in place to filter copyright content? Why is there no simple checkbox upon uploading, to remind users of their duty to ONLY share images to which they hold the copyright?”

To read the full story from Hardy herself—and see more evidence of the stolen photos that she’s found on the platform—head over to her blog. You may also want to visit the PicsArt website and search for your own images there as well.

We’ve reached out to PicsArt’s press contact for a statement regarding the widespread image theft that’s being perpetrated by some of their users, and will update this piece if and when we hear back.

UPDATE: PicsArt has responded to our request for comment with the following over email:

PicsArt, which is used by millions of people mostly for our robust photo and video editing features, values artists’ original works. We do not condone uploads by users who don’t own the rights to their images. Like most other apps with user-generated content, we adhere to DMCA standards and remove content that’s found to be in violation.

We’re saddened by the fact that Rosie has had a bad experience with PicsArt, but we’re fully aware of her case and are doing everything we can to help, including removing the content she’s brought to our attention. I hope this clarifies the situation a bit. Please let me know if I can help with anything else.

We followed up to see if there are any plans to add some sort of safeguard reminding PicsArt users that they should only be uploading their own content, to which the spokesperson responded that “that’s actually being reviewed right now.”

Image credits: All photos and screenshots by Rosie Hardy and used with permission.

How to Manage Self-Isolation: Tips for Freelance Photographers