Photographer, educator, and journalist Spencer Cox from Photography Life recently had one of the most memorable photography experiences of his career while running a workshop in the Liwa Desert outside of Abu Dhabi, UAE.

The rare moment happen a little over a week ago, on a morning shoot that seemed like it would be ruined by the weather. Spencer and his colleague Nasim had taken their group out to the desert at 4:30am in the hopes of capturing a spectacular sunrise; what they were greeted by instead was a thick fog covering the whole landscape.

The situation seemed hopeless, but they stuck around for over an hour until a little piece of blue sky showed up, and Spencer decided to take a chance.

“I decided to launch my DJI Mavic 2 Pro drone and see if there was any hope. The clouds still appeared to cover the whole desert. As Nasim and I looked at the screen, it seemed hopeless,” writes Cox. “But then we noticed a small clearing in the distance that appeared to have sand dunes visible. I flew my drone in that direction, and as I got closer, both Nasim and I started jumping for joy!”

The result of their perseverance is this gorgeous image of the desert almost completely covered up, as just a few dunes emerge from the thick fog: 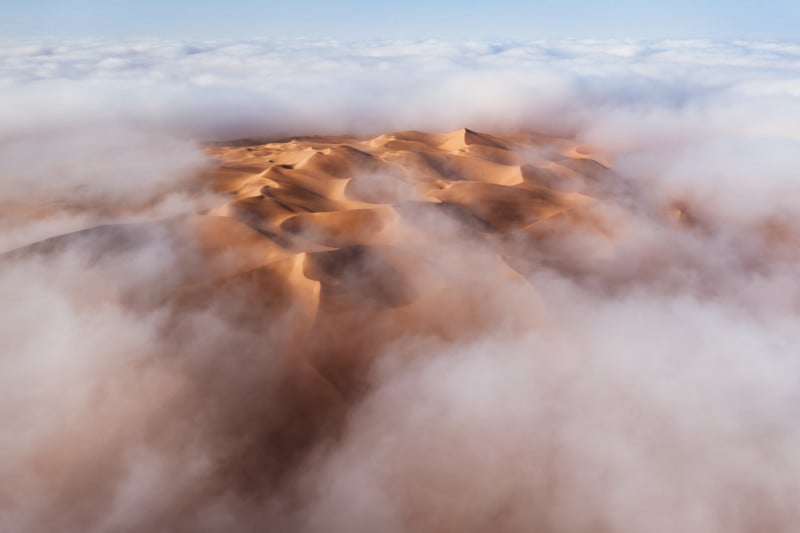 Spencer recalls the moment as “absolutely breathtaking” and “something none of us have ever seen before”—a small patch of sand bathed in golden light, almost completely surrounded by clouds.

To find out more about this photo and how it came to be, take a moment to watch the BTS video up top, and then head over to over on Photography Life to read Spencer’s the full write-up about the experience.