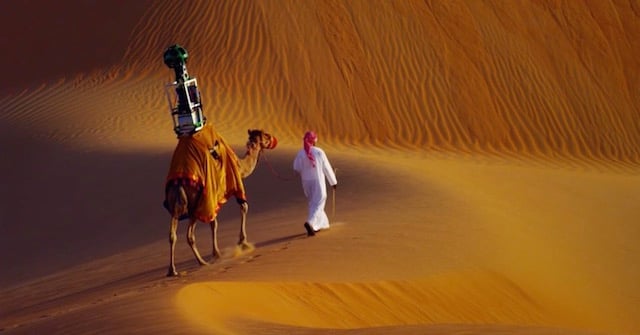 In Google’s ongoing effort to ‘Street View’ some of the most incredible places on Earth, the company has pushed the limits of the 360-degree genre once again.

This time, Google set out to capture a panoramic view of the Liwa Desert in the United Arab Emirates, by strapping their Street View Trekker Camera onto the back of a willing camel.

The views captured by the ‘camel-ra’ are impressive and show off just how vast the desert can be. In fact, until objects such as trees and other camels come into the picture, a sense of scale is almost nonexistent — the hills simply look like a never-ending sea of sand.

Google pieced together the resulting images into six separate ‘Views,’ each of which highlight a particular region of the beautiful Liwa Desert. Head over to the Liwa Desert Views page to see them for yourself if you aren’t afraid of losing a few minutes – or hours – of productivity.