Most unfair camera comparisons these days pit smartphones against APS-C or full-frame digital cameras. But for their latest video, Sonder Creative took it a big step further: they’re comparing an 8×10 large format film camera against three digital cameras that, let’s be honest, never stood a chance.

This video is actually Part 2 of their “large format vs digital” comparison. In the first video, they showed how 4×5 large format film simply couldn’t be matched by the full-frame 50MP Canon 5DS R. In this video, they upgraded their setup to an Intrepid 8×10 field camera, and compared it against three digital contenders: the Canon 5DS R again, the 50MP medium format Hasselblad X1D II, and the 100MP medium format Fuji GFX 100.

For lensing, they chose glass that would keep angle of view and depth of field roughly equivalent between all four cameras. 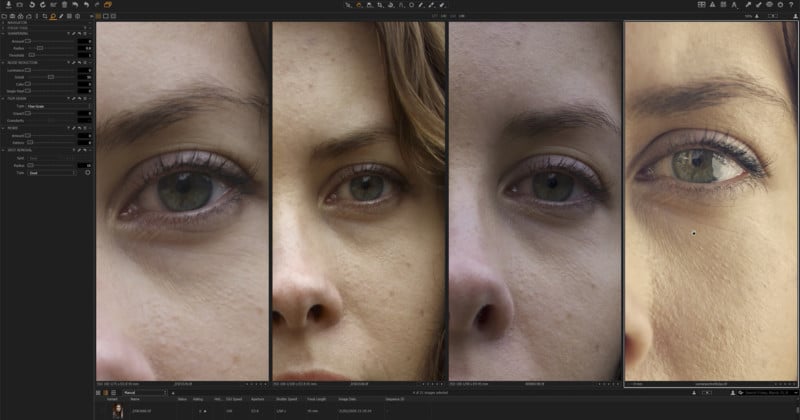 There’s no sense in hiding the outcome, since it’s obvious: 8×10 large format film, even when it’s “only” scanned at 500MP of resolution, puts the rest of the cameras to shame in terms of sheer detail. Yes, it’s much harder and more expensive to use. Yes, it’s a pain in even slightly low light, because the f/6.7 lens they were using is still an f/6.7 lens. But when you nail the shot, the sheer surface area can’t be beat.

Check out the full video up top to see the comparison in action and go through side-by-side crops of a few portraits for yourself.

As with any “unfair” comparison like this, it’s less of a surprise and more of a reminder that, as good as digital image sensors are getting, nothing beats physics. You simply can’t compare the results from even the best and newest 100MP medium format cameras against a sheet of film that’s bigger than the camera itself.