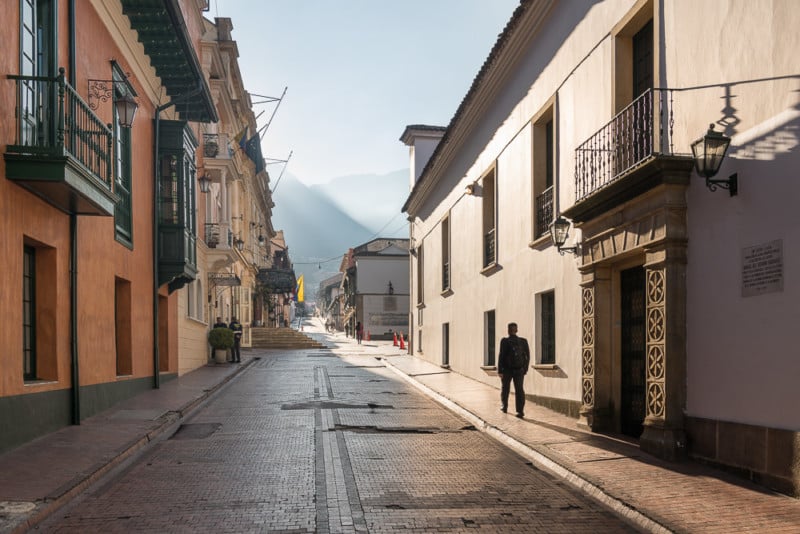 As a travel photographer, I’m often asked if I’ve ever been robbed or had any negative experiences in far-flung corners of the world, Previously I didn’t have much to talk about, but after a recent trip to Colombia, that changed…

I knew the capital city of Bogotá has a dangerous reputation, and Colombia as a country does as well. During the height of the Escobar drug wars in the 1980s, Medellin was the murder capital of the world. However, ever since the government signed a peace deal with the FARC group in 2016, Colombia has found peace and has become one of the fastest-growing tourist destinations in the world. In 2016, Lonely Planet named it the 2nd best country to visit in the world.

As with many trips to Colombia, mine began and finished in Bogotá. I planned on spending a couple of days on either side of my flights to see and shoot the city. On my second morning exploring La Candelaria, an old town area of the city, I was waiting for a shot of the building at the corner of a crossroads when a motorbike pulled up next to me and we exchanged looks. He pretended to be checking for directions, but as I made my shot, he moved towards me, grabbed the neck strap of my Nikon D850, and tried to accelerate away on his motorbike.

Luckily I had a strong enough grip on the camera and managed to keep hold of it during our brief tug of war. It was an early wake-up call to the dangers of those streets. This was only 7:30 am, a time of day that you usually feel pretty safe in most parts of the world! After that experience, I took more care when shooting, usually wrapping the neck strap of the camera around my wrists so it wasn’t easy to snatch it. None of the other destinations on my itinerary had anything like the danger of Bogotá, and the rest of the trip passed without trouble as I visited Cartagena, Tayrona National Park, and traveled south through Santander and Boyaca provinces before returning to Bogotá for the last two days. 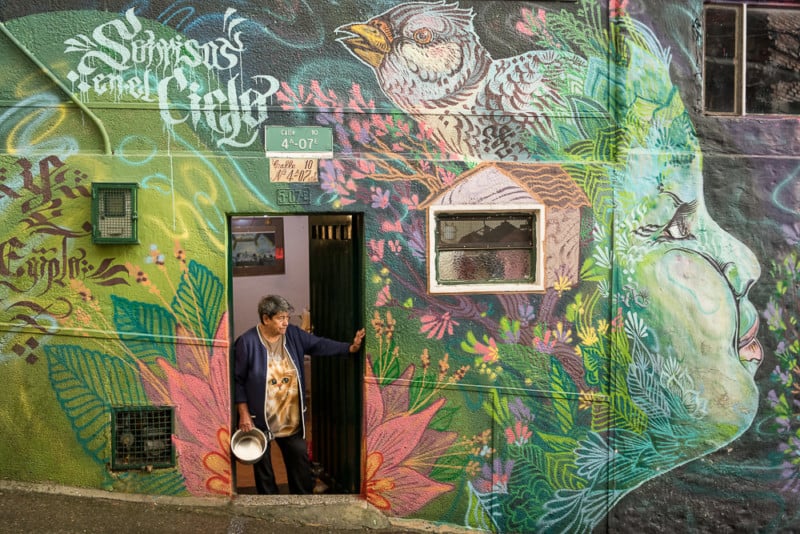 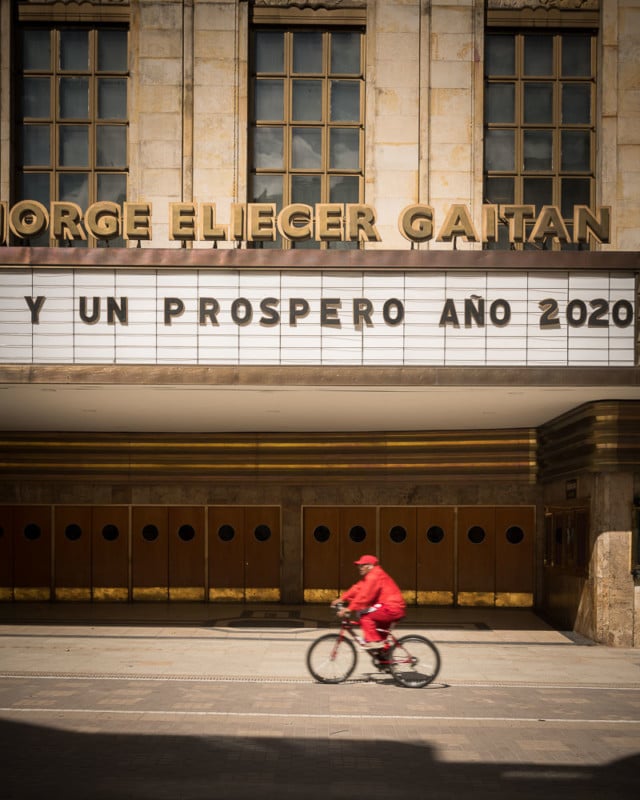 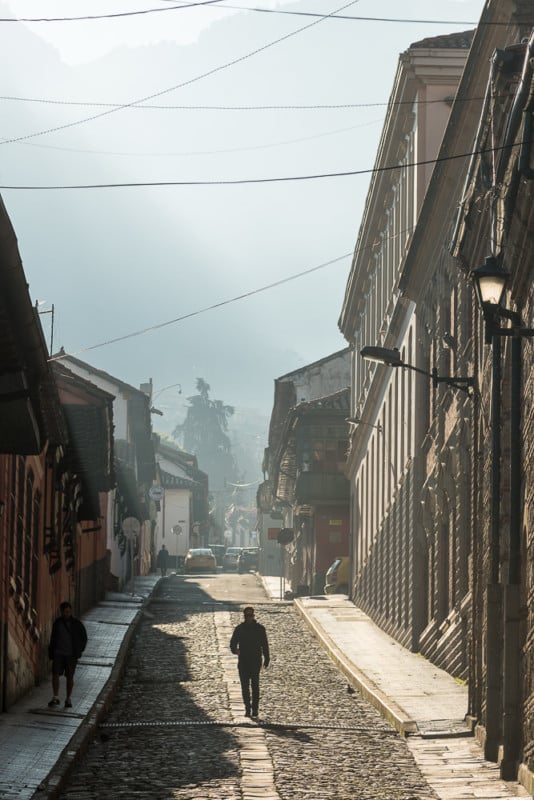 After shooting the view of Bogotá from Monserrate (a famous viewpoint where locals and tourists alike gather), I took the funicular railway down the hill. There is a path down the hill that I later learned has an extremely dangerous reputation for muggings so even the locals don’t use it. I was walking down the road back to my hotel carrying a Lowepro Pro Runner AW350 backpack and Giottos CF tripod when I approached two young men who were standing a few yards apart on the pavement.

I got a bad feeling about them as there was no bus stop and it just felt suspicious, but I was too close to turn back up the hill. As I walked past the first guy, I saw him move in my peripheral vision, then the second guy stepped out towards me. That’s when I knew something bad was going to happen. I tried to push him away and make a run for it on the road, but they managed to grab hold of me and trip me up.

A struggle ensued, and it was only halfway through the altercation that I realized they were carrying knives (a fact they were probably shouting at me, but my Spanish wasn’t good enough to comprehend!)

The second time they knocked me down, I dropped the tripod during the fall. At this point, they settled for that and made a run for it back into the hills near Monserrate. As the adrenaline wore off, I felt the blood streaming down my arms and realized I’d been stabbed just above the elbows (near the tricep muscles) on both arms. There was a weird mix of shock and happiness that I had survived with relatively minor injuries and that I still had all of my stuff (wallet, iPhone, and camera bag).

The police eventually arrived and took me to the local hospital, where I got my wounds cleaned and stitched up, and where I got a tetanus injection (presumably muggers don’t clean their blades before each attack). 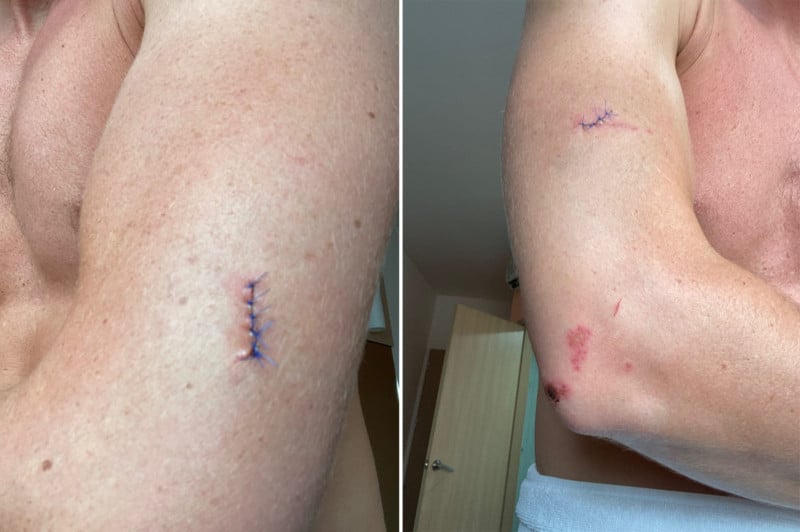 At the end of the process there, I received the invoice. I had no idea how much healthcare costs in Colombia but it turned out to be a very reasonable $40! The police waited around for me at the hospital and then dropped me off at my hotel, where they explained to reception what had happened. The following day, I reported the incident at the local police station.

After a violent assault, one can suffer psychological aftereffects for some time. I spoke to Colombians during the trip who had also been the victim of muggings in Bogotá. They’ve almost accepted that it was part of life in the city, and sooner or later anyone would suffer it — that’s how dangerous the capital is.

When I eventually left the hotel the day after my attack, I was very nervous. The first time somebody brushed past me on the street, it made me jump. Any man making eye contact I saw as a potential threat. But I felt the only way to overcome this fear was to get out and about, to try and return to normal life. 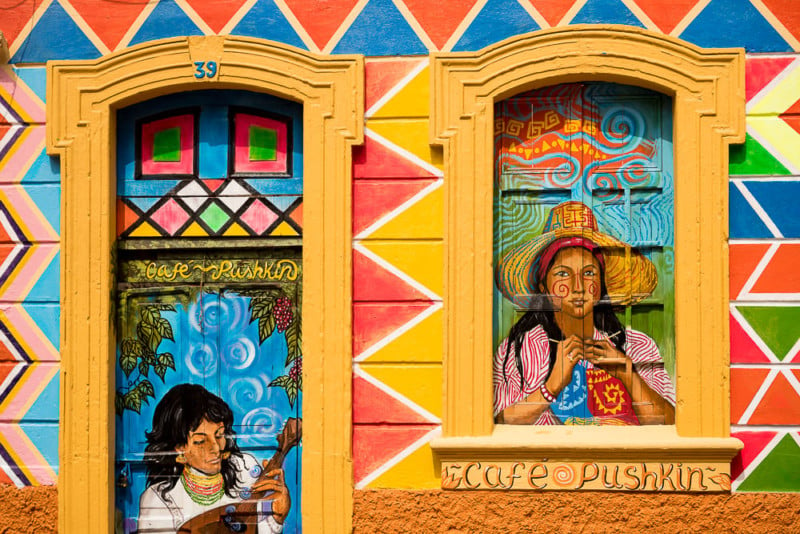 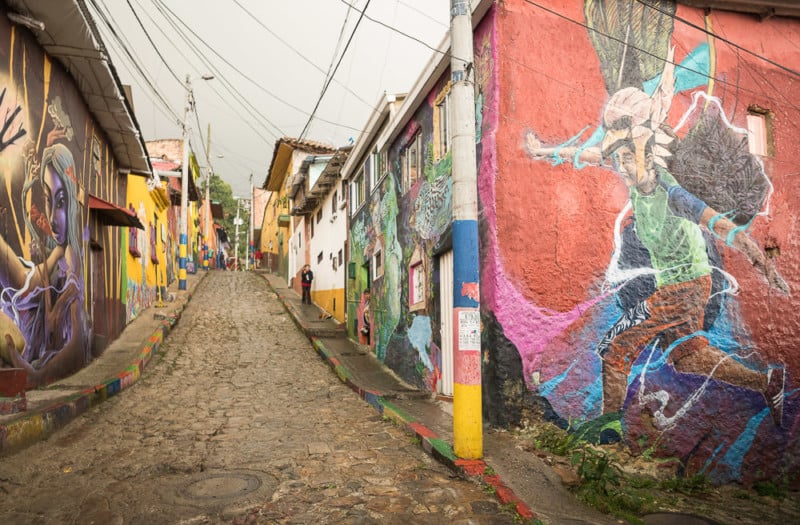 I was very lucky to get off so lightly — if those knives had caught an artery then I probably wouldn’t have been able to get medical care in time. The rest of my kit was insured, so its value would have been covered in the event of theft, but if those two guys knew how much the contents of my bag were worth (a $3,000 Nikon D850, $1,900 Nikon 24-70mm VR, and $2,100 Nikon 80-400mm) then they might have gone further with their assault to get the bag off me.

My advice is to always research your destination thoroughly when visiting other countries. Find out which areas of a city are dangerous and if you have to be there, avoid walking around with visible equipment, particularly if you’re alone. If you are ever unfortunate enough to be in this situation, then just hand over whatever they ask you for. I don’t know why I didn’t do that — probably because I didn’t see the knives until later — but risking one’s life just for a camera and the results of that day’s shoot is obviously not worth it!

There are 3 options when it happens: fight, flight, or hand over the goods. And with no time to think, it is an instinctive choice.

Perhaps in my case, carrying the tripod was the giveaway that I had camera stuff in my bag, or maybe they just targeted me because I was alone. Either way, it puts me off carrying so much kit around at night and from carrying a conspicuous item like a tripod. The general trend in photography over the last 5 years is going towards mirrorless systems with built-in stabilization, reducing the need for our 3 legged friends.

I was in Colombia to shoot personal work. January is usually a time I go away to photograph a new destination, refresh my portfolio, and reinvigorate myself both professionally and personally. But these trips are self-funded and I can’t pretend that getting stabbed in the street doesn’t make me question the merits of doing these trips.

About the author: Ben Pipe is a travel photographer based in London. The opinions expressed in this article are solely those of the author. You can find more of Pipe’s work on his website and Instagram. You can also find a gallery of his photos from Colombia here.