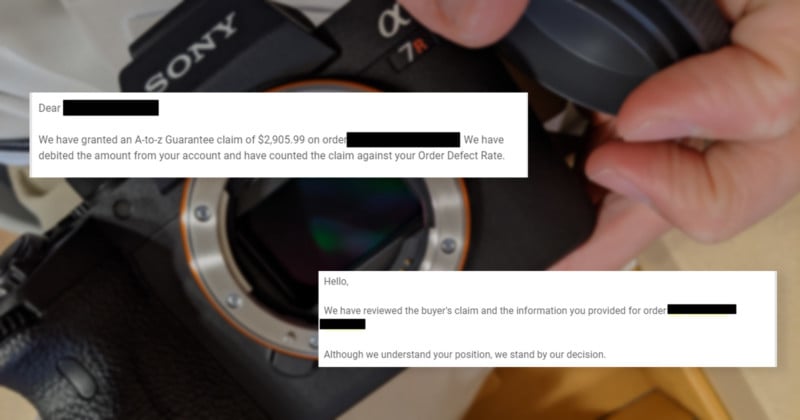 I am an amateur photographer, and I’ve sold cameras non-professionally on Amazon for over eight years as I’ve upgraded. That trend comes to an end with my most recent transaction. In December, I sold a mint-in-box Sony a7R 4, and the buyer used a combination of social engineering and ambiguity to not only end up with the camera, but also the money he paid me.

Amazon’s A-to-Z Guarantee did not protect me as a seller. Based on my experience with this transaction, I cannot in good faith recommend selling cameras on Amazon anymore.

Author’s Note: This is a summary and my personal opinion, and not that of my employer or anyone else.

I ordered a second Sony a7R 4 as a backup for a photoshoot. My plan was to then resell it, as the seller fees were slightly less than the rental fees at the time. I listed it on Amazon, and it was almost instantly purchased by a buyer from Florida. I took photos of the camera as I prepared it for shipment, and used confirmed & insured two-day FedEx. The package arrived to the buyer on December 17th.

The buyer listed an initial for his last name—that should have been a red flag. It gave him a layer of anonymity that will be relevant later.

On December 24th, I apparently ruined Christmas, as the buyer now claims that accessories were missing. Throughout this whole ordeal, I’ve never heard directly from the buyer, in spite of numerous email communications. He never told me which “product purchased/packaging” was missing. 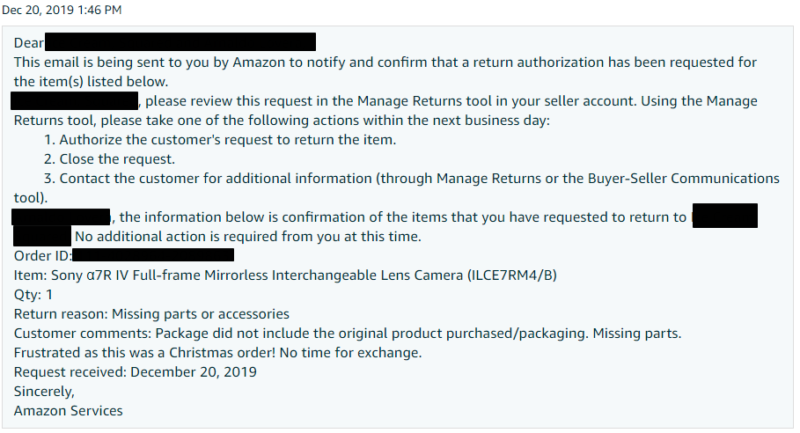 I started a claim with Amazon, showing the photographic evidence of a mint-in-box a7R 4 with all accessories. I denied the return. The buyer offered no photographic proof or other evidence that he received anything but a mint camera.

To this day, I have no idea what he claimed was “missing” from the package. I even included all the original plastic wrap!

After about a week of back-and-forth emails, Amazon initially agreed with me. 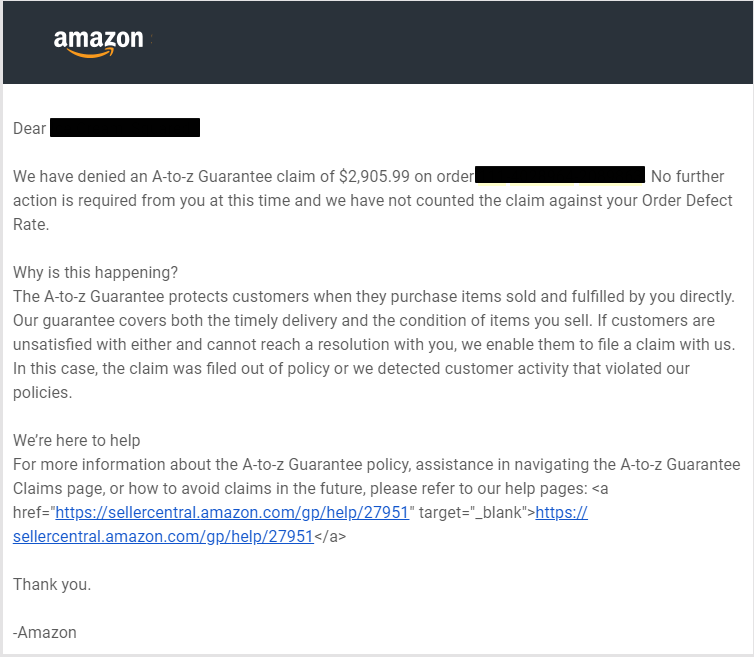 Somehow, a second support ticket for the same item got opened up. The issue was not yet resolved. The buyer kept clawing back. The next day, I get an email about a “refund request initiated.” On this second ticket, Amazon now turned against me. 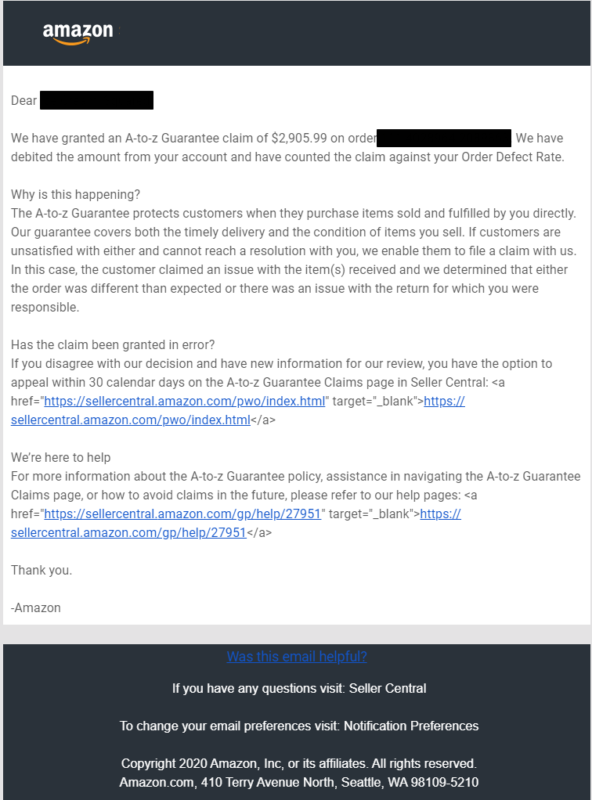 Now, we’re in 2020. The buyer apparently shipped the camera back to me; however, he entered the wrong address (forgetting my last name, among other things). The package was returned to sender, and I never got to inspect what’s inside. Whether that box contained the camera as sent in like new condition, a used camera, or a box of stones is an eternal mystery.

Truly, had he shipped it to the right address, I would have had multiple witnesses and video footage of the unboxing.

Here’s where it gets interesting: as I appeal the claim, Amazon notes that the buyer is not responsible for shipping the item back to the correct address, and they can indeed keep the item if they want to, following the initiation of an A-to-Z Guarantee. 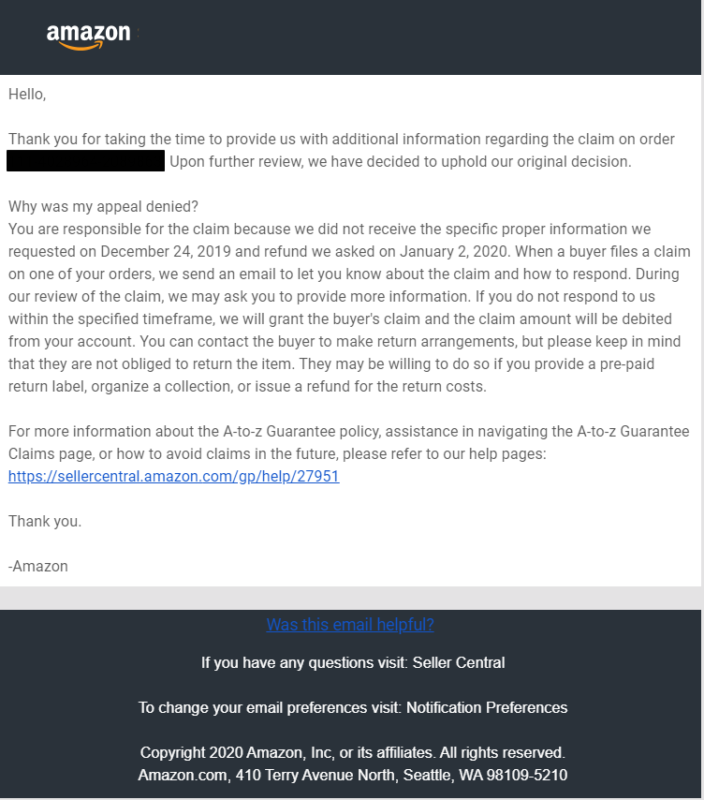 Indeed, I have a paper trail of emails that I in fact sent to Amazon. Somehow, they got their tickets confused. When I followed up on this email, they shut off communication. 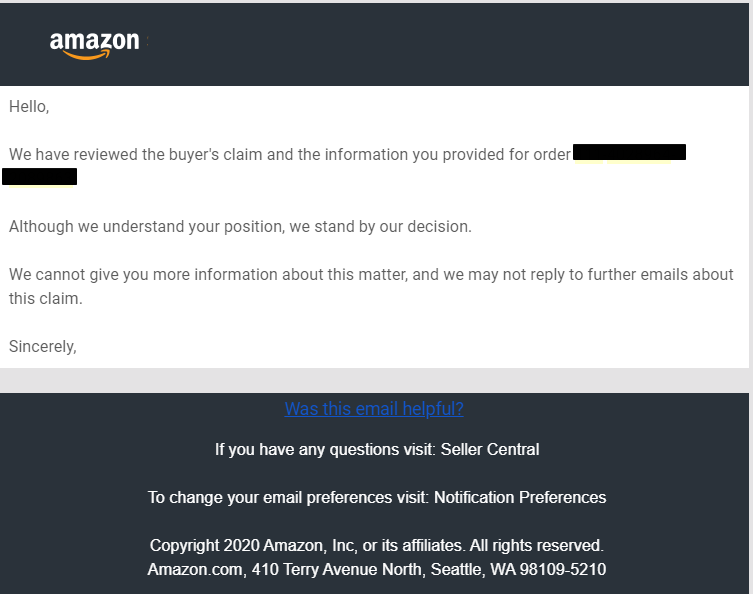 So, as a buyer, you can keep an item with “no obligation to return,” even if you can’t substantiate your claim of “missing items or box.” Now the buyer has the camera, and the cash.

The whole experience has been frustrating, humiliating, and sickening to my photography hobby. I hope that this serves as a cautionary tale for selling such goods on Amazon, if my experience is any indication.

As of now, I’ve emailed the buyer again to ship the camera back to me, and I have a case open with Amazon, in which I provide the 23 emails they claim I never sent them. That case was closed with no response from Amazon. I had an initially-sympathetic ear through their Twitter support, until I mentioned the specifics of my case.

I hope that this was a worst-case, everything-goes-wrong scenario, and I hope that it doesn’t happen to anyone else. There ought to be more even-handed failsafes for these transactions.

UPDATE 2/26/20: I am grateful to report that Amazon Twitter support viewed the article and got back to me. They have refunded me the camera cost, less the seller fees. Everything is back to normal, and I believe the outcome is fair. I hope that equitable safeguards can be built to restore future buyer and seller confidence in the community. Loopholes should be reduced.

I look forward to getting back into fireworks photography later in the year, but for now, I’m just happy to be back taking and sharing photos. Thanks to PetaPixel and all the solidarity the readership gave me. Amazon came through in the end. 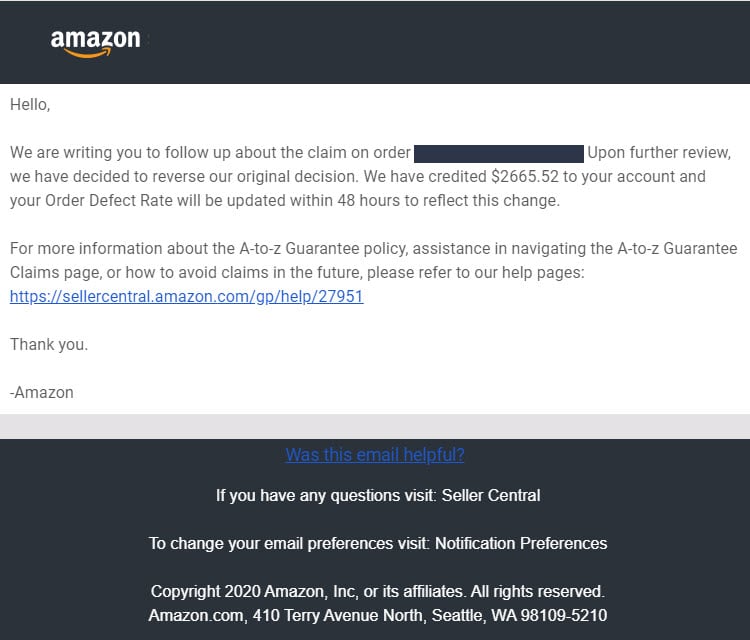