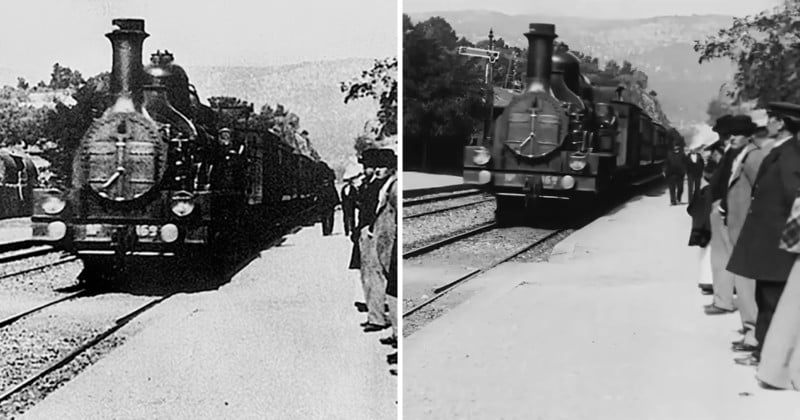 YouTuber Denis Shiryaev used publicly available AI-based technology to take a grainy, low-resolution short film from the year 1896 and upscale it all the way to 4K and 60 fps. The results, while not perfect, are downright astonishing.

The film Shiryaev chose to feature is the iconic “L’Arrivée d’un train en gare de La Ciotat,” a 50-second short film that shows a steam locomotive entering a train station, and was first shown to the public in January of 1896.

You probably recognize the film. The legend goes that the film so terrified the audience—who had never seen a moving image of a train coming straight at them—that some people screamed and ran away. This story has been called “Cinema’s Founding Myth,” and while the truth (or lack thereof) of this tale is highly debatable, it made L’Arrivée d’un train a perfect candidate for this experiment.

Here’s a version of the original that we found, for reference:

To achieve this, Shiryaev used two programs: Google’s DAIN and Topaz Labs’ Gigapixel AI. Gigapixel AI was used to upscale the puny resolution video all the way to 4K, while DAIN was used to create and insert frames where they didn’t exist before, increasing the FPS of the video to 60.

As we mentioned, the results aren’t perfect. There’s some characteristic “smoothing” and weird artifacts present in both the overall image and the motion, both pretty typical of interpolation at this scale. But for most people—and on most devices—the effect can seem like pure magic.