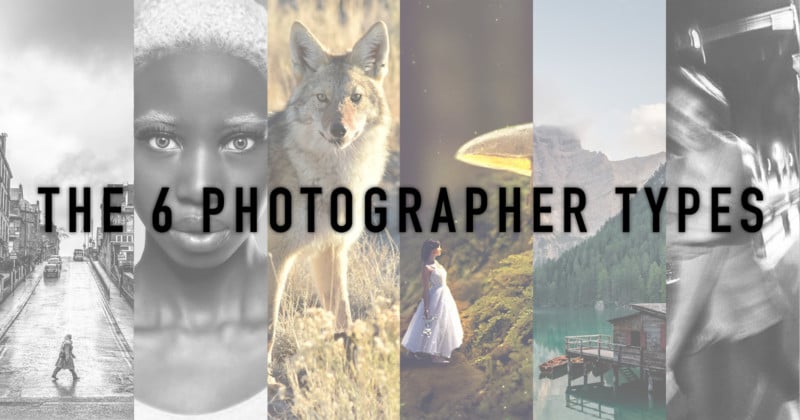 Sitting with a group of picture-takers last night, it dawned on me that even though all of us call ourselves “photographers,” so much of what we care about, the way we shoot, the very core of what we like about taking pictures, is distinct — almost to the point of us having little useful to share.

While we do find common ground through appreciating each other’s images, it gets me thinking about the fundamentals of being a photographer. Distinctions between us are frequently described about either subject matter (i.e. news, still-life, nudes, selfies, wilderness, etc.), style (black-and-white, abstract, panoramas), or technology (large format, Leica, plastic camera, 35mm film); but I am starting to think it has something to do about the activity itself:

What skills do I need or guidelines do I set for myself?

So in this vein I propose that there are six photographer ‘types’:

The fun is in finding moments and catching things on the fly, composing frames dynamically, being a candid observer of the world. They’re sometimes funny, or curious, or visually captivating. There’s no “look here” or “smile.” There’s almost no post production—often limited cropping and basic darkroom-types of tuning, but pixels aren’t moved. Frequently a street shooter. A sort of purist. A lot of monochromatic work.

This photographer is a sort of hunter/gatherer, but the job mandates significantly more investment of time, and that distinction is important. Like shooting wildlife, sports, or a newsworthy event. It takes patience, which is occasionally rewarded. They know how to wait for the rare, rare thing to happen in front of the camera. Which takes planning… like a heist. This is a wildlife photographer, but could also be a sports photographer or photojournalist.

Images captured are a starting point, the raw materials of creation. Through creative post production more elements are added, adjusted, cut, modified. Pictures are a photographic art form, not any sort of snapshot. Just how much post production will vary, but images aren’t meant to be journalistic so much as “creations.” Pixels are manipulated. Multiple exposures.

A sort of hunter for subjects that don’t move. A sort of sportsman, but chasing light, not dynamic subjects. Landscapes, architecture, still-lifes to varying degree. The photographer has time to figure things out, find the right angle, set up the exposure. The subjects can’t be or won’t be controlled.

A hip-shooter, snapshooter, taking dischordant captures of the world, out of windows, while walking, often uncomposed or at least not formally composed. Often with dutch angles, blurry subjects and harsh lighting.

The point being: a group of photographers might all have great photos of an alligator, but a hunter/gatherer pulled off a couple shots while on a walk by a lake; and a sportsman learned there were alligators in the lake and camped out all week to get that gator at the perfect moment surrounded by other animals as the sun was setting. An illustrator got a decent picture of a gator on a walk, but then spent hours adding the birds and turtles and sunset to spice up the image. The director hired a gator handler to get the animal to open its mouth and had three assistants with reflectors to make sure it looked amazing.

Even with the same kind of camera and a similar type of subject, none of these photographers approaches a picture the same way, nor has the same kind of training or experience or interest in the photo, and dare I say, would have relatively little to teach one another.

I wondered for a moment whether most photographers were generally a mix of these attributes, but in most cases a person gets into photography and loves the activity for some aspect that fits their personality. The hunter is serendipitous, the director is not; the sportsman has enormous patience, the anarchist does not; and so on.

Anyway, that’s my observation. Which are you?

At the suggestion of my pal Chris Lunt, let’s try to Myers-Briggs this. Rate yourself (say, 1–5) on these attributes. The results should drop you into the above buckets:

About the author: Michael Rubin is the Founder and CEO of Neomodern, and host of the podcast “Everyday Photography.” To see more from Michael, visit Neomodern or give him a follow on Instagram. This post was also published here.